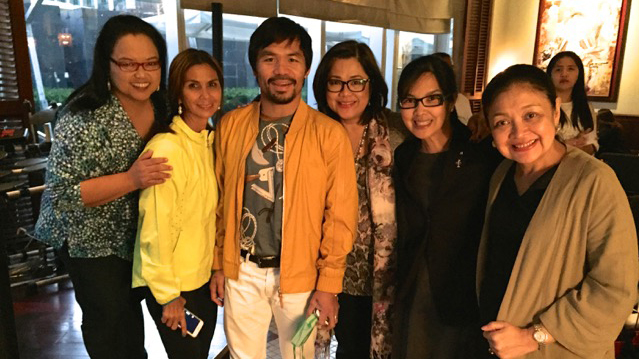 “I was in the middle of the forest and kneeling and crying and asking for forgiveness saying, ‘Lord forgive me.’”

Named “Fighter of the Decade” for his power in the boxing ring, a larger fight raged within Manny. The night prior to his dream he received a phone call from his mother saying that his sister had stopped going to school because he hadn’t sent home any funds.

Manny was immersed in his own fame. “At that time I loved partying, gambling, womanizing, everything, but… but, I was praying,” says Manny smiling sadly. “I was praying at least 5 times a day, but I’m doing these things.”

Now in his dream he met his opponent.

“There was a light – a very white light like the sun – and I want to look up and look at the light but I cannot raise my head. I’m kneeling and bowing and crying Lord forgive me…”

Manny grew up in an impoverished area of Manilla. His parents separated when he was in 6th grade. He took work where he could find it and began boxing. He exploded into stardom, becoming an unstoppable force.

“As the first eight-division world champion,” writes Wes O’ Donnell, with the Bleacher Report, “he’s easily one of the best pound-for-pound fighters in the history of the sport.”

Muscle-taught, 5’5” and sporting a Hollywood smile, Manny “Pac-Man” Pacquiao was adored by his fans. Yet Manny the man was crumbling.

Two years after his dream, Manny surrendered to Christ and began reading his Bible. The first passage of scripture he opened said God speaks to individuals in dreams. Hit with this truth, Manny staggered with the knowledge that God had spoken to him.

This past year he partnered with Cru’s ministry Artists in Touch in Manilla, to explain his testimony and present the Gospel to 250 individuals involved in arts, media and sports. According to Orpah Marasigan, with Cru in Manilla, 25 people indicated that they received Christ and another 18 wanted to join “seeker groups.”

At the end of Manny’s dream he heard God’s voice.

“I felt like melting, dying,” says Manny. The sound alone was 12 times that of thunder. God asked Manny ‘Why you leave me, why you keep away from me?’”

Today Manny, who’s next bout is against Timothy Bradley Jr., is a fierce memorizer of scripture and stays close to God in his corner.

Jesus in the Spotlight

A couple and their daughter step into an unknown arena to reach out to other families, and together they create a legacy of strong families spreading throughout their city.

What do you do on your commute to work? 100 million Filipinos spend 1-3 hours a day on commuter buses. How to transform this time, was a question of prayer and planning.