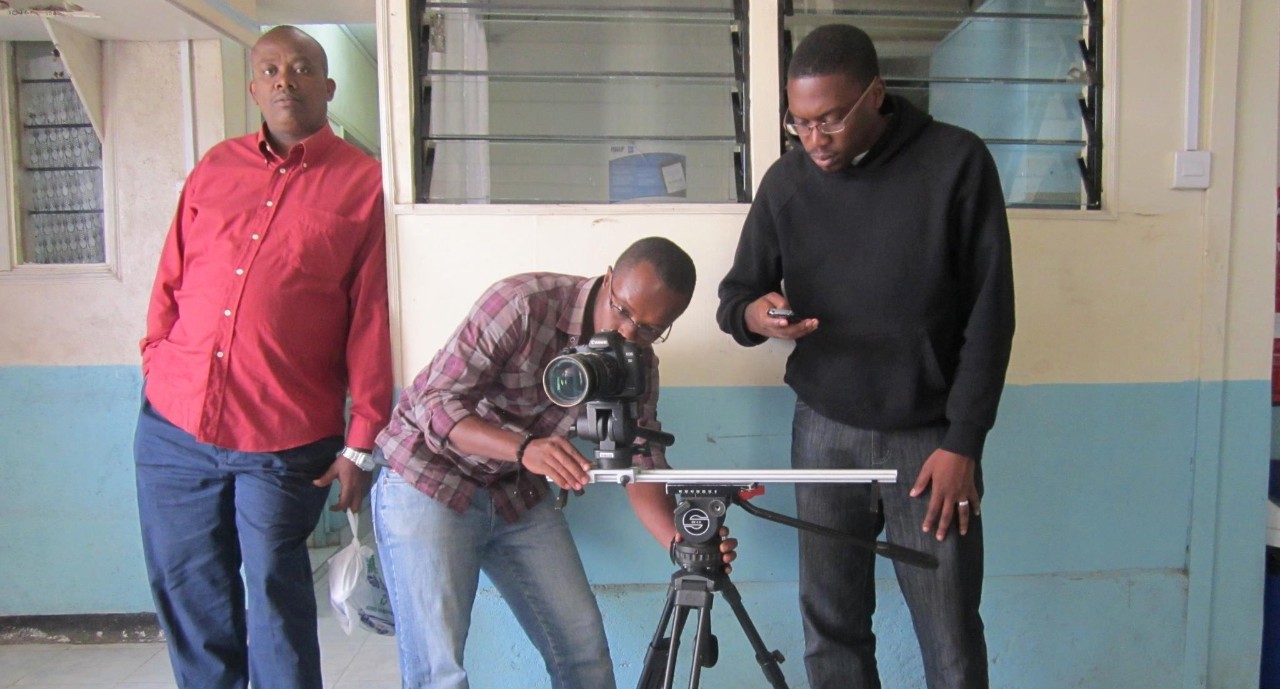 A group of Kenyans are reaching others for Christ in an unexpected way.

“Last year we made 3 short films and it is very exciting,” Jimmy says.

Jimmy Gor is a campus staff member with New Life Ministry (Cru) in Nairobi, Kenya. Because of his background in media and performing arts, Jimmy’s core ministry is serving as coordinator for the Emerging Artists program in Nairobi. He writes, produces and directs for theatre and film.

“We are engaging our stories in outreach,” he says, “like the guy in Zimbabwe who is clowning for an income but realizing he can use his talent for the Lord.”

The group’s first film, “Caught Up” was released in January 2012. “It was more like a modern day retelling of the story of the parable of the bride who is not ready for the groom,” Jimmy explains. “So we did it, it was a wedding story, nothing really preachy. But after we did it, we decided to use the core forum of artists to get their view. The artists invited some of their friends to come view the film who were not even Christians, but they were interested in what this new short film was all about.”

The artists hadn’t even finished post-production, but it was still an exciting time for them. “We showed the video and had a discussion,” Jimmy says. Some of the attendees identified directly with the coming of Christ. “Out of the 15 artists in attendance, 5 were not born again and 4 of them prayed right there and then to receive Christ,” Jimmy recounts.

Those people who accepted Christ are involved now with the ministry. A staff member, Liz, and core volunteer, Peter, are going through follow-up with them.
Jimmy is also a mentor for performing artists and works with volunteer artists in the community who are involved in the ministry. The group is intentionally engaged in producing films and showing films to begin spiritual conversations with the community.

Jimmy is working with volunteers who have seen people pray to receive Christ at short film shows that serve as outreach events.

In the artists forum, the Emerging Artist group uses Cru tools like the 6 Basic Steps and the Four Spiritual Laws structure to take new Christians through follow-up.

Peter Kawa is a professional artist in the community and a volunteer with Emerging Artists. He will often carry a small digital tablet around with evangelistic short films on it for people to watch. He is very involved in the local industry, going to auditions and forums like for TV commercials and things. “So while people are standing around in line, Peter is walking around showing the short films on his tablet,” Jimmy says. He is also using the film Walking With Jesus in the same way and engaging people in spiritual discussions.

“Unlike me, Peter is directly in the industry as a film and theatre artist,” Jimmy says. “Peter is part of a team of traveling theatre—he is seeing people accept Christ backstage at events like this.”

“I’m excited about the future and what is in store for Africa… thinking about my own sphere of influence, I’m excited about going out to influence the media even more. For certain, God is at work. So the question is: What more does God have for us?”

Kenyan warriors tear the film screen in half trying to defend Jesus during a JesusFilm showing.

Crocodile Attack on a 9-year-old Leads to Rejoicing

Jaco’s response to a crocodile attack saved a life, led to adoption and opened a door for the gospel.

African and American high-school students join together in Kenya to encourage students to trust God and lead their country.