A Box of Love in a Box Truck Leads to Transformation

When it comes to telling people about Jesus, Rosa Marti willingly follows wherever the Lord leads in her Sidewalk Sunday school on wheels. That's just how she rolls. The Orlando woman, with the help of her husband, Pedro, converted a former moving van into a mobile ministry center, complete with its own stage. 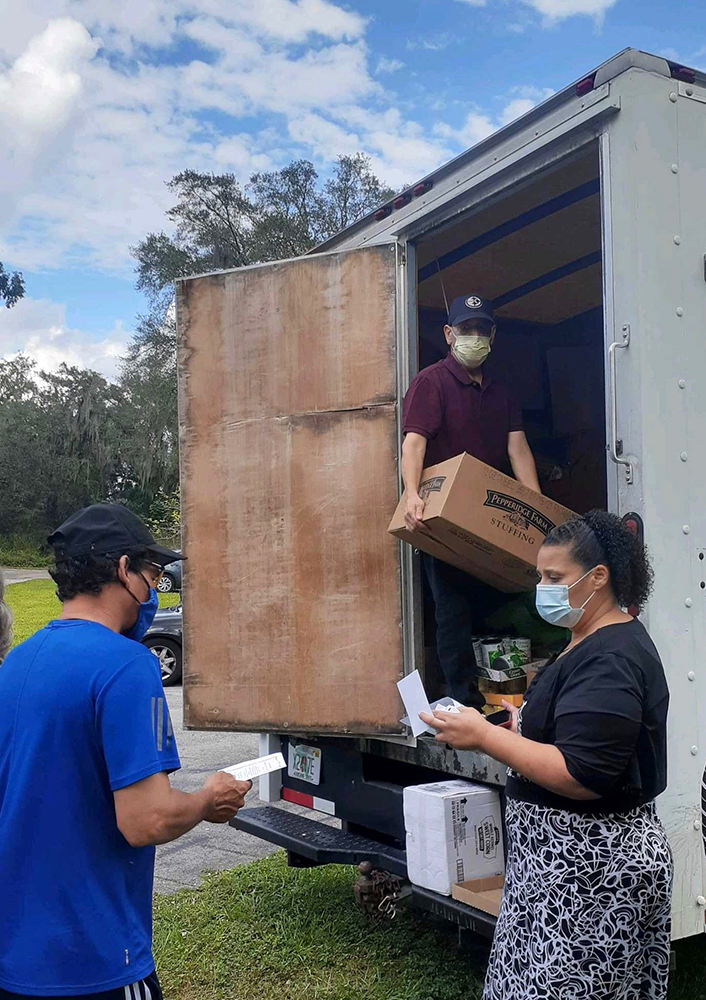 "I got a sound system in there," Rosa said of her Sidewalk Sunday School. "We have closets with toys. We go to different neighborhoods. ... It's like a church on wheels."

For efficiency, the passenger-side wall of the van drops down, creating a quick platform to host evangelistic outreaches, such as distributing Boxes of Love® with Cru® Inner City, a 27-year-partnership. But, before leading her to reach out to others, God first had to do a deep, cleansing work inside of her.

"No one ever loved me the way He has," said Rosa, who found Christ after enduring mistreatment and abuse into adulthood. "My relationship with God drives me to get up every day with the excitement to reach and encourage people to seek God with their whole heart."

Her relationship with Christ started in October 1988 after hearing a sermon about the pain Jesus endured during His crucifixion. She admitted to being overwhelmed that Jesus would go to such an extreme to wipe out her sins.

"What an amazing love," she said.

Soon, Rosa was able to see her own worth from God's perspective.

"I had to rise from what was left of me, and take a stand to protect myself and my children," she said.

Rosa relied on God's Word and prayer to build a strong foundation for her faith.

"I rose up with the courage to get out and I promised myself that no one was ever going to abuse me again," Rosa said.

In response to God's tugging on her heart, and armed with a new confidence, Rosa began advocating for others through street ministry.

"I saw the pain in people's faces," she said. "They needed salvation. God put in my heart and mind all the fundraising ideas and, in less than three months, we raised all the funds needed to purchase and convert the truck to a church on wheels."

Five years ago, she shared her story in her book, "True Love at Last."

Rosa went on to say she realized God redeemed "all the years of pain and anguish" by using them to equip her to help people through her ministry.

"He uses the horrible things the devil throws at us for His glory to bring healing and restoration to lost souls," she said.

A major resource in her campaign to reach lost souls is her partnership with Inner City, which includes the annual Boxes of Love outreach that provides a full Thanksgiving meal for six people, plus a Bible and gospel literature. Rosa distributes the boxes and other Inner City Compassionate Products™ from her rolling church.

One of Rosa's favorite stops is Reeves Terrace, a 176-unit low-income complex, sandwiched between the city's downtown and the Orlando Executive Airport.

Among the thankful was one woman who registered for the boxed meal but couldn't come to the outreach. Making certain she didn't do without, Rosa dispatched a volunteer to bring a Box of Love® to her.

"She said, 'Ohhh, I was praying to God this morning because I had no food and I didn't know what to do.' She was crying because God answered her prayer," Rosa said.

Last year her ministry also hosted a Boxes of Love distribution in conjunction with Sunday services at a church where her son, Jose Ortiz, is pastor. God began moving hearts even before the sermon.

"As we were worshiping this lady came forward, crying and asking God to forgive her all her sins," Rosa said. "She was so grateful that we invited her to church because she hadn't been to any church in a long time. She needed Jesus."

As the woman, Tiffani, headed down the aisle, she carried a prayer card to the altar where she set it down. After the service, Tiffani told Rosa she was so "touched by the Lord that she felt that she had to ask God to forgive her."

Rosa barely had time to process what she just witnessed when two others — strangers with similar stories — came forward during the altar call, surrendering their lives to Jesus. Carlos and Gloria returned the following Sunday.

"They'd been looking to go to church for a long time and they just felt led to come in through those doors. They came for a Box of Love and they got something better they said," Rosa said, a deep belly laugh punctuating her words. "That was wonderful to see because that's what it's all about. We're going fishing for men and women."

Teaching Them to Fish

Rosa already has Tiffani, Carlos and Gloria plugged into a discipleship study.

"We're going to do biblical training for them so they can grow in the Lord," she said.

Rosa credits Karen Akers, the Orlando Inner City team and its donors for providing the resources for the successful Boxes of Love campaign.

In all, Rosa and her team handed out 75 Boxes of Love.

"We fill those boxes every year for that purpose, to preach the gospel," she said.

Don't you love how creative Rosa was in creating her mobile Sunday school? It's a perfect outlet to share Inner City resources and the gospel of Christ. Share Rosa's story on Facebook or other social media platforms by using this link.