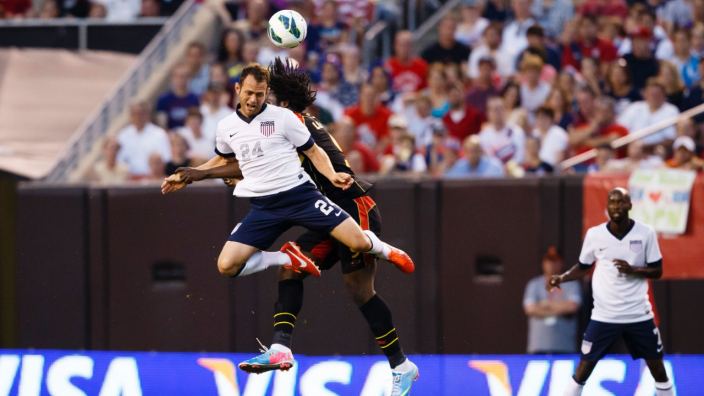 Recife, Brazil – Click, click, click, ROAR! 22 soccer players emerge from the tunnel of Arena Pernambuco. As they step out, the muted sound of their cleats is obliterated by the beat of drums, chants and thousands upon thousand of maniacal fans.

One of the players, Brad Davis, steps out into the open 81-degree air, muggy from the previous night’s flooding. For the 32-year-old, 13-year MLS veteran, who’s been named to the MLS all-star team 6 times and has lifted the MLS cup for the Houston Dynamo twice, this moment – stepping onto the World Cup stage – tops them all.

Growing up in St. Louis, Missouri, soccer was always Davis’ passion. He played a mere two seasons at SLU (St. Louis University) before getting picked third in the MLS draft. After brief spells in New York and Dallas, Davis found his groove in Houston. There his precision crosses and set-piece wonder-goals earned him the nickname “the left-footed David Beckham.”

But being as good as Davis is, he bought into the cut-throat culture of professional sports: to win at all costs. 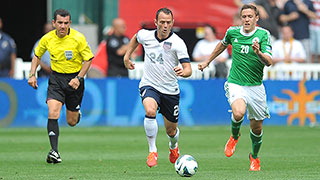 “In this lifestyle, you always want to be at the top,” says Davis. “You are always challenging against somebody. You always have to be the best.”

Getting better as a player came at a cost. He grew uptight and angry, rarely admitting he was wrong or that something was his fault. This led to tense locker room “conversations.”

Seeing Davis struggling, his wife, Heather, a firm follower of Jesus, introduced Davis to a group of Christ followers. They loved, accepted and encouraged him; and Davis, driven by his need, committed his life to God.

Now God is rebalancing Davis’ life. God and family come first, soccer comes second. And as a player, Davis sees that he has a lot more to offer. He’s freed to dive in and leave the results in Jesus’ hands.

“We as humans, we’re always going to worry,” says Davis, “but being able to talk to Somebody who’s willing to take [your worries] from you, as much as you’re willing to give up, is a breath of fresh air.”

But it hasn’t taken away Davis’ daily struggle. Understanding that his identity isn’t wrapped up in his career, but in God’s love, is difficult. Davis says he often doesn’t feel forgiven.

“If something doesn’t go the way I want it to or I do something I know I shouldn’t do, I still feel I have to make this right for me to feel better,” he says. “Sometimes it can feel like you’re failing all the time.”

In contrast, Davis cultivates a heart of gratitude. He reaches out to God in moments of success, not just in moments of need. At home with his wife, he holds her hands and says, “We’ve been so blessed. We can’t forget who gave us these opportunities!”

Back in the stadium, Davis now stands on the grass surrounded by 500 million dollars of steel and concrete. He hears the roars and the wrappings of fame. Prompted by advice from AIA chaplain, Davis remains still for a moment. He acknowledges that all he’s experiencing is a massive gift, and he puts any pressure he feels into God’s hands. Then he prays, "Here we go, God. I'm giving myself to You, let's go do this."

Hear other players stories about the World Cup and share The Prize with others.