No Matter What Others Think

William Carey, an impoverished English shoemaker born late in the 18th century, had to overcome great odds to obey the call of God to become a missionary in India. In opposition to his work, the Directors of the huge, influential East India Company presented this resolution to the English Parliament:

The sending out of missionaries into one Eastern possession is the maddest, most extravagant, most costly, most indefensible project which has ever been suggested by a moonstruck fanatic.
Then in 1796, the General Assembly of the Church of Scotland passed the following resolution:

To spread the knowledge of the gospel amongst barbarians and heathens seems to be highly preposterous.
One opposer - a speaker in the House of Commons - said he would rather see a band of devils let loose in India than a band of missionaries.

But despite all this antagonism, Carey persisted. "Why is my soul disquieted within me?" he wrote. "Things may turn out better than I expect. Everything is known to God, and God cares." 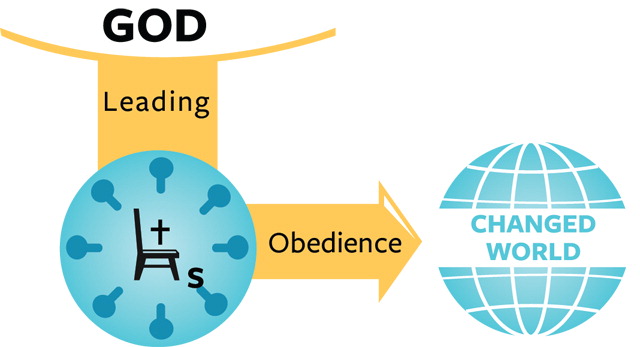 William Carey stood the test and became the father of modern missions.

A sincere, committed Christian will always take his stand for Christ regardless of opposition, popular opinion, or peer pressure. If we yield to the fear of man, Satan may ruin our testimony substantially. If we obey the leading of the Spirit of God, men and women will be won to Christ.

I encourage you to take your stand for Christ and be a fruitful witness for Him no matter what others think.

Read Matthew 26:57-75 carefully. Peter knew and loved Christ in his heart, but when it came time to openly identify himself as a follower of Christ, what did he do (verse 58)?

Note the contrasts between Christ and Peter:

Some have said that Christ's teachings are only for weaklings, cowards, neurotics, and those who need some kind of crutch. As you look at the examples here of Christ and Peter, how would you evaluate such a statement?

Describe what Jesus' example means to you in facing your peer pressures.

After Christ's resurrection, what did the angel announce to the women in Mark 16:7? Why did the angel single out Peter's name from all the rest?

Upon what basis can Christ restore you even though you have denied Him?

Less than two months later at Pentecost, Peter stood up from among the disciples to give a bold defense of the Christian faith to a ridiculing crowd (Acts 2:13-15).
What shocking thing did Peter fearlessly tell the crowd (Acts 2:36)?

Compare the actions of the disciples during the crucifixion (Luke 22:47-62, 23:49; Matthew 26:56) and during this account in Acts. What part does Christian fellowship and unity play in standing up to peer pressure?

How do you think having natural courage and boldness compares to being filled with the Holy Spirit?

Write Proverbs 29:25 down in your own words.

To whom do you particularly need to confess Christ and take a bold stand for Him (Romans 10:13-15)? Why?