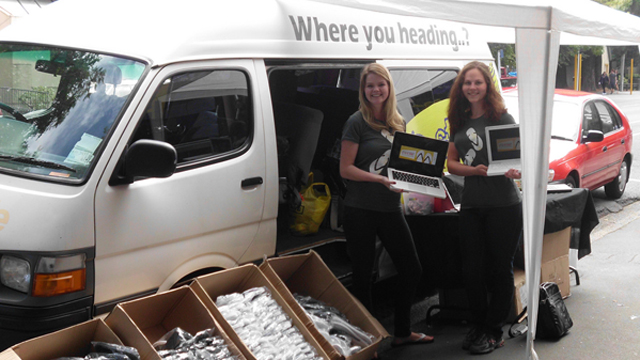 At the beginning of the school year in New Zealand, campus staff members and student leaders with Tandem, the name for Cru in New Zealand, invited students to “Start the Journey.”

They offered free flip-flops, or “jandals,” as they’re called in New Zealand, as incentive for students to answer short spiritual surveys. Each had the message “Start the Journey” on them. This year the team scrapped paper surveys in lieu of techie tools such as tablets and laptops.

During the first 4 weeks of the semester, 70 university students placed their faith in Christ through the “On the Journey” national campaign that happened on 6 campuses.

“I met Stephanie during O’week,” explained Elizabeth Jackson, who serves with Student Life, a division of Tandem that ministers to university students. “We were giving away over 3,000 pairs of jandals and like most students she was pretty keen to get her hands on some.”

On her spiritual survey at Otago University in Dunedin, Stephanie indicated she had a desire to know more about spiritual things. While meeting with her, Elizabeth learned that Stephanie had a genuine desire to find out what it meant to have a personal relationship with God. So for the next 4 weeks, they explored what God says about knowing Him. At the end of the study, Stephanie placed her faith in Christ and now is stepping out in faith and telling others about Jesus.

Professional basketball player Tim Behrendorff learns how to use the platform of sport to tell others about his faith.

Rugby Heroes Looking Up to God

New Zealand’s top rugby players are learning how to influence their nation spiritually.

Frances Tagaloa helps netballers in New Zealand use their status as celebrities to resonate for their hero, Jesus.