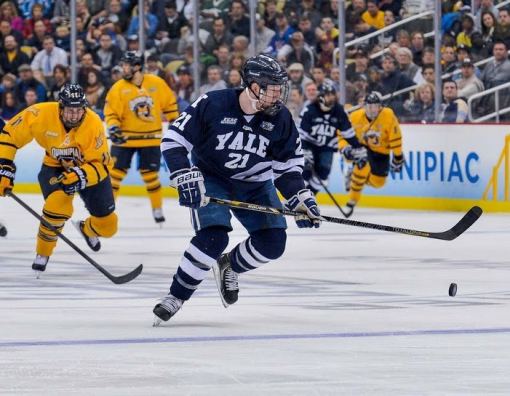 By all accounts, the Yale hockey team should not have been in the NCAA tournament this spring, much less in the championship game of the Frozen Four. To say they were a longshot is putting it mildly.

“The team was up and down this year. We showed signs of what we could be, but it was up and down,” says Colin Dueck, a senior defender from Calgary, Alberta, Canada. “We finished toward the top of our league and were nationally ranked, but it ended disappointingly at the league tournament.”

Dueck, who has been involved with Athletes in Action since his first semester at Yale, says he felt the two losses at the league tourney had all but sealed the Bulldogs’ fate: There would be no national tourney appearance in this, his senior year. The teams had been good over the years, but not good enough to make it to the big dance.

“We just peaked at the right time”

But as the bracket began to fill up, Yale found itself with the last at-large bid into the tournament, earned more on another team’s loss than their own record. It was all uphill from there.

“We just peaked at the right time,” Dueck recalls. “The last four games of the year were the best four games of our year. Everything started fitting together, and we started knocking off some pretty high-ranked teams.”

At the championship game in Pittsburgh, Yale faced conference foe and nearby neighbor Quinnipiac, who came into the national tourney at No. 1 overall and had already knocked out the Bulldogs three times that season…handily. But as the last buzzer sounded, it was Yale on top 4-0, skating away with their first national title.

“It was the coolest possible way to end a college career,” Dueck says, recalling the crazy celebration with his teammates. “It’s been quite a ride, and a blessing.”

“I had to focus on the peace God has given me”

Off the ice, however, Dueck was battling with himself about how to handle the moment with grace and humility, seeking the Lord while doing so. Before the game, he’d wrestled with the magnitude of the crowd and the implications for his future: “How would I look to pro scouts in the stands? What were people going to think of me after tonight?”

On the advice of AIA staff member Craig Luekens, who serves at Yale, Dueck took time to pray and dedicate that time to God, no matter the outcome. He found a quiet calm amid the storm in the Bible.

“I read about God’s peace and found some comfort in that. One verse, John 14:27 (“Peace I give you, not as the world gives.”), was what I really focused on,” he recalls. “No matter how I play or what people think, that would never give me peace like God will. I had to focus on the peace God has given me and find comfort in that. I was able to give that up to God more than I had been.”

After the confetti had settled, Dueck again sought Luekens’ advice on what the godly reaction should be to the hype surrounding the national championships. While the player wanted to be humble and play down the achievement, Luekens had different ideas.

“He challenged me to think more about it, and I realized as big of a deal as it is to win the championships, I didn’t want people to think that was the biggest deal to me or that I’m a big deal,” he explains. “As exciting as it is to reach the pinnacle in your sport, that’s not all I’m playing for. I wanted to glorify God no matter what, whether we won or lost the game.”

“AIA has been such a blessing”

That shift in thinking has come on the heels of four years in the AIA ministry at Yale, something Dueck claims was just what he needed in the harried world of college sports and Ivy League academics. Looking back now as he graduates with a psychology degree and pursues hockey at the next level, Dueck can see how God orchestrated that involvement from before he even stepped foot on campus.

He recalls a letter from someone at Yale who had seen his profile information about being a church member. Scrawled on the bottom of the standard typed form, the employee had suggested Dueck check out AIA when he got to campus. Within the first few days of freshman orientation, he and his new roommate, Mark, also a believer and a football player, visited the AIA table at an extracurricular fair and met Luekens and other athletes.

“AIA has been such a blessing during my four years here,” he says. “It’s been the best possible experience that I hadn’t even imagined before coming. Having a Christian ‘running mate’ in Mark to bounce things off of, being able to trust his opinions and knowing they’ll be faith-based or scripture-based, has been so valuable. It was the hand of God for sure.”

“God has been able to use us to promote Himself”

In his tenure, Dueck says he has seen AIA grow exponentially, both in numbers and in impact, and he’s personally benefited from the fellowship and guidance of older students along the way.

At the end of his freshman year, Dueck joined the student leadership team and has led Bible studies as well.

All this was encouragement for the Canadian who came in with a strong faith learned from Christian parents and who hoped he would find a fellowship with other believers. He found it easier to avoid the typical college temptations by simply immersing himself in a group of friends who followed Christ.

“In general, our group has been pretty close-knit. Whether in alternative activities or keeping each other accountable on campus, keeping that perspective has been helpful,” he says. “It’s been neat to see others’ growth and to get them involved in leadership on campus as well. God has been able to use us to promote Himself and AIA.”