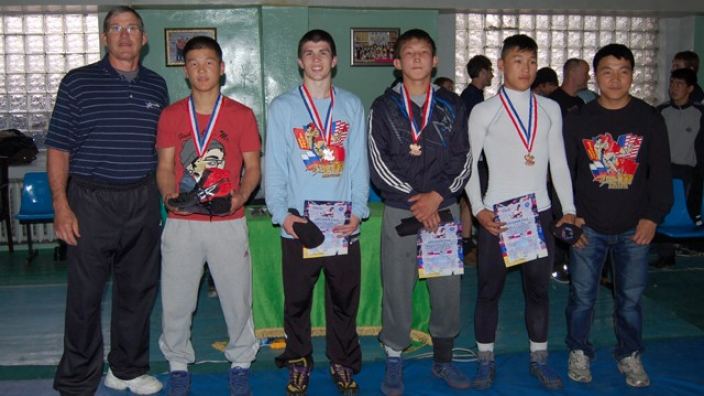 Sean and others who placed in his weight division are recognized by Olympic gold medalist John Peterson at the tournament.

Wrestling a World Away

A young athlete learns to serve through sports.

At the young age of 17, Campbell County High School’s Sean Fausz has made quite a name for himself in the world of competitive wrestling.

This summer, Fausz competed both nationally and internationally with the World Team for Cadets, comprised of wrestlers age 17 and younger.

Only weeks before he was to compete in the 2013 World Championship in Serbia, he devoted 19 days of his summer to training with and serving the wrestling community in Mongolia.

While Fausz did compete in a number of tournaments in Mongolia, that was not his main reason for making what was his first trip outside of the U.S. Fausz and a team of 16 other wrestlers with Athletes in Action were on a mission to spread the Christian message among the Mongolian people.

“It wasn’t really about wrestling,” says Fausz. “We started off the trip visiting jails and playing sports, [mostly basketball and soccer], with the inmates. Afterwards we would share the gospel message with them.”

The following week of the trip, Fausz told his personal faith story during a wrestling camp attended by about 100 Mongolian wrestlers.

“Very few of them were Christians,” he says.

He and his American teammates could only communicate with the Mongolians with the aid of a translator. But they did not let this act as a barrier for the message they had to share.

“Sean interacted with the Mongolians really well,” says AIA team leader Rob Bronson, who was inspired by the way Fausz connected with the national wrestlers.

“He made it a point to friend them all,” Bronson adds.

Though both the wrestling style and way of life in Mongolia is far from similar to those in America, the team did their best to embrace the differences. Fausz in particular made an effort to become like the Mongolians in order to reach out to them. He was often seen wearing Mongolian sweats and T-shirts.

“He bought into why we were there,” says Bronson. “He was there to serve them and to be a friend.”

Mongolia is the least densely populated country in the world, made up of approximately two million people. With wrestling as the national sport, Mongolia is home to some of the best wrestling in the world. In fact, 80 percent of the world’s top wrestlers come from Mongolia and surrounding countries.

While Mongolia is a great training ground for wrestlers, it is nearly barren of Christianity. Almost all people in the central Asian nation are from other religions.

Walking along the barren land and broken concrete slabs that make up many of the small towns of Mongolia, Fausz was humbled by the way of life that the people there led.

“It made me realize how much we take for granted living in America. We really are so blessed,” he says.

Throughout the trip, Fausz sought to show God’s love to the Mongolian people, which he says is the same approach he takes when interacting with his American wrestling friends.

“I try to show Christ through my life and actions the best I can,” Fausz explains. “It doesn’t come up through talk much.” 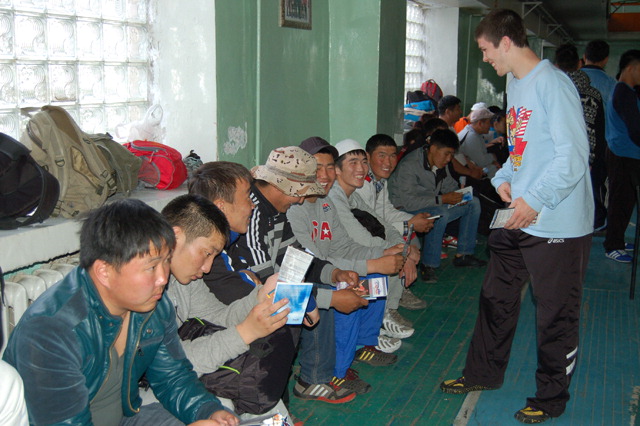 Sean hands out AIA wrestling brochures and sports-themed copies of the Gospel of John in Mongolian at the John Peterson wrestling tournament. Every person in attendance received a copy of both resources.


“My faith in God helps me relax and not be nervous”

Fausz makes daily choices to stand out as a Christian among those around him. Even in his sport, he has found that his belief in God has an impact on his athletic performance.

“My faith in God helps me relax and not be nervous,” says Fausz. “I leave the match in God’s hands. I go out there and have fun. It’s just a match.”

This ability to relax before competing is something Fausz says has come about since his freshman and sophomore years.

“My performance used to determine my self-worth,” he says. “I guess as I mature in age and my faith in God, I’m learning to place my worth in knowing Christ as my Savior while still enjoying the competition and challenge of wrestling.”

“I know that God has a plan for me,” Fausz continues. “So when it comes to sports, a loss is not just a loss. I know that God made me for that match and there’s a reason for that loss.”

“God easily could have let me die. Instead I’m alive”

Fausz grew up in a Christian household, and began a relationship with Christ at an early age. But he says a turning point in his faith journey came this summer.

Only a few weeks before he was to leave for Mongolia, Fausz and a friend were involved in a severe car crash. Fausz walked away without injury, but his friend required surgery to treat broken bones. Fausz says it served as quite a wake-up call.

“God easily could have let me die. Instead I’m alive. I know now He is not done with me,” he explains. “This experience showed me that the cliché is true, we should all live each day like it‘s our last. At any moment, it could be taken away.”

Fausz placed second in his first individual competition in Mongolia with an impressive score of 77-3, which earned him a place on the FILA Cadet Team. Upon returning to the States, he competed and won USA’s ASICS/Vaughan Junior and Cadet National Championships in North Dakota. A few weeks after that, he competed in Serbia where he went 2-1, placing ninth out of the 32 athletes in his weight bracket.

Fausz is now preparing for his final high school wrestling season, which will kick off Nov. 30. In late October, he announced his commitment to enroll at North Carolina State University after graduation in 2014.

In the midst of these things, Fausz also has been taking advantage of opportunities to share about his trip to Mongolia and why, despite his impressive athletic accomplishments, his faith in God has been his main focus. He continues to be involved in AIA's outreach efforts and recruitment clinics in Ohio.

“They see what we're doing, and they want it”

“Besides being a great role model for his fellow wrestlers in athletics, Sean participates in all the Bible studies,” says Bronson. “He’s getting more vocal [about his beliefs] and the others really listen to him.”

Fausz and the team that visited Mongolia this summer left a lasting impact with the locals. Bronson is planning to take a group back again soon.

“The connection that was made with the Central Asian wrestlers was magnetic,” says Bronson. “In fact, the head of the Junior Cadet Team in Mongolia came up to our (AIA) staff (members) at the end of the program and said that this was the best training they've ever had.”

This coach remarked that he had never seen his athletes have more fun, be less stressed and produce better results than when being led by the “Christians.”

Leader of the Pack