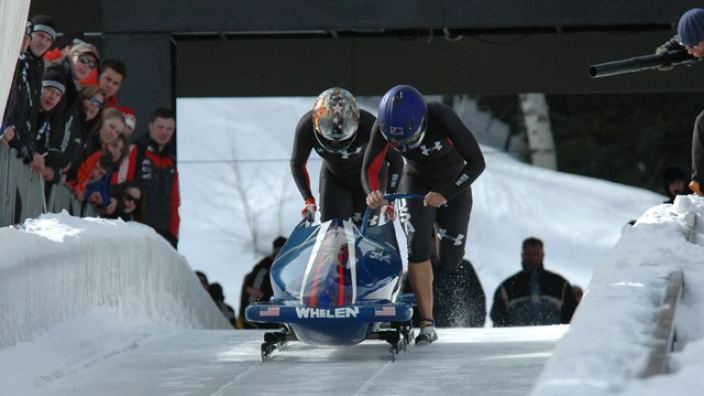 Elana Meyers: “I’m in this sport to glorify God”

Elana Meyers always dreamed of being an Olympian. She imagined herself atop the podium, hearing her national anthem, celebrating being the best in the world. This dream is still coming true, but not how she imagined.

Meyers is now an Olympic bobsledder, but from the age of nine, she lived and breathed softball. She was the first softball recruit at George Washington University and quickly set nearly every offensive record.

But it wasn’t all perfect.

“My sophomore year, our softball team was doing really badly and our season ended up getting canceled,” says Meyers. “So, that being the center of my life, I got really depressed. I didn’t know what to do and I didn’t know what my purpose was. I just started researching religions. Something inside of me told me I needed more than this.”

“I knew that I needed to change my life”

Over Christmas break that year, Meyers was reading a book about spiritual things when she felt overwhelmed with emotion and started crying.

“It hit me that Jesus is the way,” she recalls. “I can’t explain it by anything other than that. It was so strong and powerful; I knew that I needed to change my life.”

When Meyers returned to GWU the next semester, she got plugged into the Athletes in Action group on campus. With the support of other Christian student athletes, Meyers began to understand the meaning of being a Christ-follower.

As the athletes were growing in their faith, their community was growing in number. It wasn’t long before Meyers became a leader in the group, and her friends challenged her to teach at an AIA meeting.

“To be able to share God’s Word and my faith with people all over our school was an amazing opportunity,” says Meyers.

As a student leader, Meyers learned how to recognize the needs of a group and grow through the struggles. These are lessons she carries with her to bobsled. 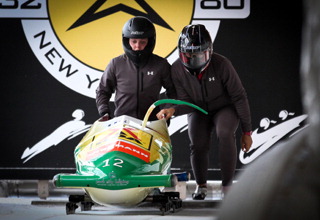 “I totally ‘crashed and burned’”

In 2003, Meyers thought her dreams were coming true with an invitation to try out for the U.S. softball team.

“I had an Olympics tryout but I totally ‘crashed and burned’ during it,” she states. “I knew if I wanted to pursue this dream of going to the Olympics, I needed a new sport.”

Meyers’ parents had suggested she try out for the U.S. bobsled team in 2002, but at the time, she wasn’t ready for a new sport. It wasn’t until retiring from professional softball in 2007 that she remembered her parents’ advice.

“I emailed the [U.S. bobsled] coach, they invited me to Lake Placid, N.Y. to try out, and two weeks later I made the national team,” says Meyers.

“God put me here for a specific reason”

Since then, Meyers has worked hard to become one of the top female bobsledders in the country. She competed in the 2010 Winter Olympics in Vancouver and won the bronze medal with driver Erin Pac.

“To walk away with a medal was the accomplishment of a lifelong dream,” she remembers. “It’s hard to put into words how incredible that experience was. That’s one of those moments when you know how real God is. I think I won that medal to glorify Him.”

After the 2010 Olympics, Meyers switched to the driver position, her goal from day one of bobsled. As an elite driver, Meyers has gained respect and a leadership position on the U.S. team. She aims to get to know new bobsledders and foster them into athletes with Christian values who will continue to grow the sport.

“One of the big reasons I was put in bobsled is to help people not only reach their goals, but come to Christ,” says Meyers. She is aiming for a gold medal this time, but that’s not all.

“God put me here for a specific reason and I don’t think it’s just to win medals,” she adds. “At the end of the day, I’m in this sport to glorify God, so if that means I come in last place or I win the gold medal, that’s what I’m going to do.”

I Agree With Kirk