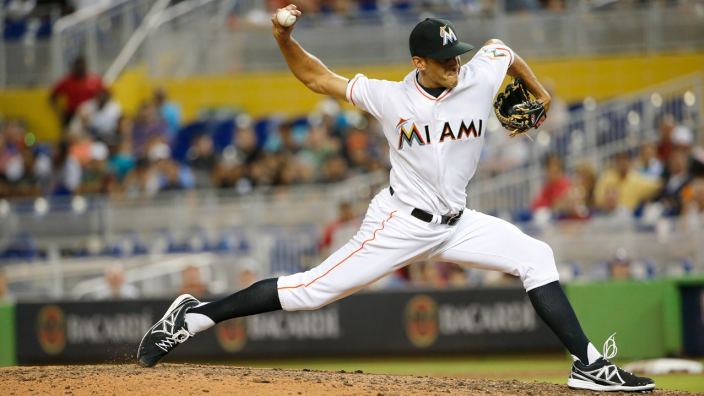 It is never easy to be confronted, especially with the truth.

In 2010, a group of men in Steve Cishek’s church sat him down and openly talked with the Miami Marlins closer about the inconsistencies between his lifestyle and his Christian faith.

“It was a tough talk,” Cishek says, “and I kind of resented them for a while.”

But a few months later, “It got me thinking … I wanted to be sure my salvation was the real thing.”

Cishek did not grow up in a Christian home. He went to church very early on, but stopped attending as he got older. He is the only child of Steve and Susie Cishek.

Upon graduating from high school in his home town of Falmouth, Mass., Steve accepted a baseball scholarship to Carson-Newman University (D-2) in Jefferson City, Tenn. and pursued a teaching degree in physical education.

“I went to Carson-Newman without any real belief system”

“I went to Carson-Newman without any real belief system,” Cishek says, “I believed there was a God, and I prayed to Him when I needed something … [but] I really did not know the Lord at all.”

At Carson-Newman, Cishek had teammates and friends who were Christians who began to influence him spiritually. He also attended the Fellowship of Christian Athletes (FCA) meetings regularly, and on April 21, 2006, Cishek went to an FCA event that impacted his thinking about God.

“I usually put that date in quotes because even though I said I committed my life to the Lord [at that time], I really didn’t [begin to] walk in His ways,” says Steve with a sigh.

In 2007 Steve was drafted in the fifth round by then Florida Marlins (now the Miami Marlins). He played three years in the minors, and then in 2010 he jumped up to Triple A and on to the major leagues by the end of the season. Steve made his major league debut on September 26 in Milwaukee against the Brewers. He has been one of their better closers the last four years, with 34 saves in 2013 and 39 in 2014.

During this time, Steve says, “I would read the Bible and do stuff on my own because I thought that is what you are supposed to do – and act like a good person. But really, I was still caught up in my old [lifestyle]. I was doing anything I could to comfort or please myself, anything that would make me happy or socially acceptable,” says Cishek.

While in the minors, Cishek says he was pitching to please others in order to make his way to the next level. If he did not pitch well, he would “beat himself up” because he was afraid that his teammates and other people would think badly of him.

“I did not realize I was sinning in front of an almighty and perfect God,” Cishek says. “My sins became real to me when my friends confronted me [in 2010 about my hypocrisy]. My faith became real when I realized the significance of sin and what Jesus did on the cross [to pay for them].

“Jesus has completely changed my life”

“It was then I really committed myself to the Lord,” Cishek says emphatically. “Jesus has completely changed my life. I do everything now to try to honor God.

“Really, Colossians 3:23 puts it all in perspective for me,” he continues, “’Whatever you do, do your work heartily, as for the Lord rather than for men,’ (NASB). My life – other than serving God – is baseball. It is a huge part of my life.”

Cishek, who ranked fifth in the National League for saves (39) in 2014, adds, “I try to live in the light of the Lord. I want to be a walking light to everyone around me.”

Former Marlin teammate and friend, Juan Pierre says Cishek’s faith can be seen by the way he lives his life and shares with others, “Steve is really solid in his faith.”

Cishek says, “We have an unbelievable platform in baseball. We have a lot of people, especially younger kids, who look up to us. When people say negative things about you or your teammates … you have to flip it [around] and use it as an opportunity to [talk] with people [about Christ]. Hopefully, my actions [show] how we are to be living for Christ and giving Him all the glory.”

Teammate and relief pitcher Mike Dunn says, “Steve is a great guy and he is out to help anybody and everybody all the time. He is constantly living for the Lord, and you can see it in his everyday life.”

“Steve Cishek is the real deal,” says Chris Lane, chaplain for the Marlins. “His walk with Christ is evident in his [daily] lifestyle. Steve is a great guy and one of those solid Christian guys who is really seeking to serve the Lord. He is a leader in his marriage to his wife, and he is a man of great reputation and character.”

Cishek and his wife, Marissa, were high school sweethearts.

“We really did not know each other until my senior year when she saw me play basketball. She loved my jump shot,” he says with a smile. “Eventually, we started dating and were married on November 10, 2012. We have been on an incredible journey together as non-believers and now as believers.” Marissa has a master’s degree in elementary education and became a Christian in 2010. Their first child, Emmie Grace, was born on October 21 last year.

Dan Jennings, a reliever formerly with the Marlins and now with the White Sox, says, “I see Steve as somebody I can go to and talk about anything. When you are confronted with various issues in this game, you want a Christian perspective. It is good for me to have Steve share a Christian view on life.”

“The Bible calls us to humble ourselves before the Lord, confess our sins, and believe in our Lord and Savior, Jesus Christ,” Cishek says. “[We] are not going to be perfect because Christ is the only one who lived a perfect life. But now [our] sins are covered because of His sacrifice on the Cross. [We] are called to live a life of humility and repentance.”

And those around him agree, that is what Cishek is doing.

Learn how to know and experience a personal relationship with God, like Steve.