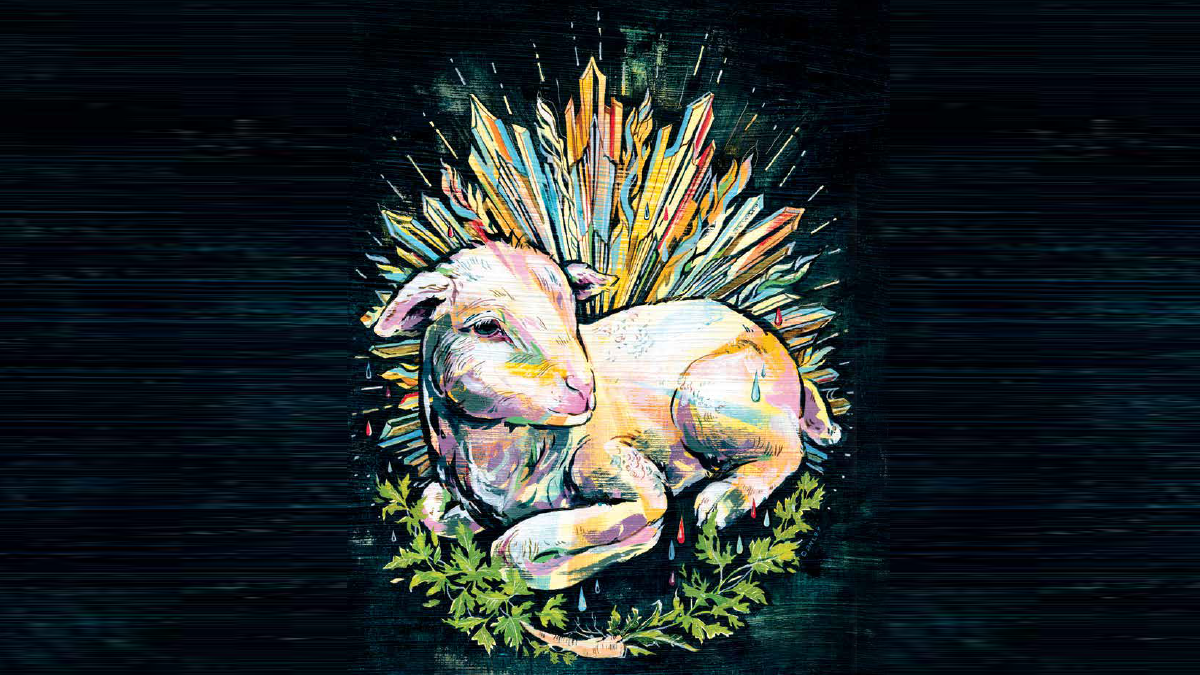 I looked into my son’s face. I saw tears streaming down his cheek as he tilted his head back and cried like it was the end of the world. I asked David to hold out his finger, and he did, but shouted, “Please don’t touch it, please don’t touch it. Ow, ow, ow!”

I tried to think back to what it was like to be a child, to when a glass splinter was a mountain of pain. My patience was wearing thin. My wife, Melissa, hovered nearby in case I did something rash, like swipe my finger down his. I could tell that, with the angle of the splinter, my finger-swipe technique would remove it. But at what cost?

As I drove to work I wondered, What is going on here that I’m missing?

With Easter approaching, I’ve been thinking about the Passover meal. In David’s drama, I see the same elements: tears, blood, a sinful splinter (maybe that one’s a stretch), a loving father determined to end his son’s pain. But there’s still something missing…

Through Passover, which most of us know connects to the Lord’s Supper in some way, God was weaving continuous themes that would find their climax in Jesus.

Two million Jewish visitors made the pilgrimage to Jerusalem each year for the feast of Passover. Jesus and his 12 disciples were among them. Vendors hawked their wares, relatives reconnected, and stories were swapped. It was a big party.

And at the center of the party was a little lamb. It had always been this way. From Isaac asking his father, Abraham, “Where’s the lamb for sacrifice?” to the Exodus from Egypt, through the Books of Judges, Kings and the Prophets, the lamb was central.

There are three crucial elements in the Passover meal: bitter herbs, unleavened bread and a lamb. They are object lessons for God’s people.

The bitter herbs represent the tears that the Jews shed while they felt the whips in Egypt, as well as the tears they would later cry in Exile.

Unleavened often bread represents sin. As the Jews baked, they would take a bit of leavened sourdough and pinch it off for the next batch. This leaven represents the continuity of our sinful state all the way back to Adam.

This last symbol disturbs me. Why sacrifice? Why kill a cute little lamb?

For a week, the family would take in a fluffy ball of bleating fun, a dubious family pet. At the end of the week, the father would take the lamb, pull back its head, and in silence, slit its throat.

For a Jew in ancient times and for most eastern cultures, the idea of communal sin was understood. All gods had a right to demand payment from a representative. Otherwise, everyone would pay.

Cru staff member Ellis Goldstein, a Messianic Jew, says that the lamb was not a lesson of God’s brutality, but a disturbing lesson for a different reason: An innocent victim was to take on the sins of the family. And as painful as it was to watch, it was a foreshadowing of the pain that God would feel when he gave up his very own Son, the ultimate lamb.

I know that the roots of the Gospel are found in the Old Testament, but I often live as if the Gospel is simply: Jesus died for me, I’m forgiven, now let’s move on.

I’m moving on when I should stay. John the Baptist said, “Behold, the Lamb of God, who takes away the sin of the world.”

Ellis points to Jesus words: “I have come not to abolish the law but to fulfill them,” (Matthew 5:17). Ellis goes on to explain, “As the perfect lamb, without spot or blemish, Jesus’ sacrificial death could do what the continual sacrifices of innocent lambs could not do. Jesus completed the law so our sin could be wiped clean by His death.”

A new revelation, something tangible, is what my son needed back at home. As I drove to work, still with a slight headache from his wailing, I realized something was still missing.

And the longer I behold the Lamb that the symbols point to, the more I can rejoice. They afford me opportunities to stop and behold God with other people, to remember again our debt paid and to move into the party of new life. In them I can even talk with Father about my new Lego yo-yo.

Yet there is still great mystery in our pain.

Bitter herbs bring tears and leavened bread lingers, and there are no trite answers in this meal. When Melissa prayed with David about the splinter, he asked, “Why doesn’t God just make it go away?” And if splinters hurt, how much more the pain of disease, violence or the death of someone we love?

The world is not as it ought. We don’t just remember back, we are to remember forward, to long for the day our Lamb is coming back. May He take root in our hearts.

In the story of the Lamb, God dove deep into our heartache and pulled off “the mightiest act of love ever to arise from a human soul.” For the loss to God is incalculable, his pain immeasurable, his grief summed up in Christ’s cry “My God, my God, why have you forsaken me?” Father and Son were violently ripped apart.

And like in Exodus, where God challenged and defeated Pharaoh, the cross was a showdown. It was a battle in which it seemed God was defeated. Three days later…well, we all know what happened three days later. Hope.

A father and son rejoicing over a splinter gone.

To learn find about more about celebrating the Seder meal visit Jews for Jesus.

Prepare Your Heart for Easter

Bringing Easter Back From the Dead