In Dura Europos, Syria, a house church’s remains lie open to the desert winds. It’s near the border of Iraq and is one of the oldest church buildings in existence. There, early Christians painted stories on the walls – Peter walking on the water, the Samaritan at the well and the women at Jesus’ tomb.

Yet only miles away the world reels in violence. 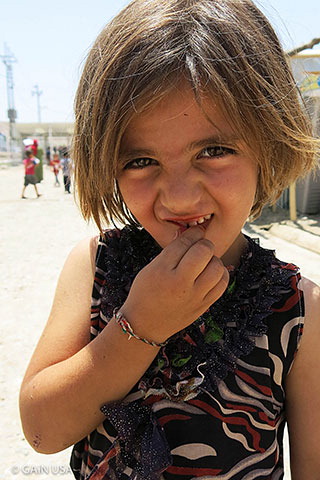 We hear it as a constant news stream of foreign and distant words: ISIS, Sunni, Shia, Kurds, Iraq, Syria, Nouri al-Maliki, Mosil and Raqqa. Add these foreign words to suicide bombings, mass graves, kidnapping, executions and war, and it’s easy to feel overwhelmed, helpless or even think the world is in an irredeemable mess.

But in this mess, Christians worship in Aramaic. Human voices still speak words similar to those Jesus spoke. That house church in the desert could be considered one of our birthplaces.

Recently Global Aid Network®, the humanitarian ministry of Cru, has been working tirelessly to bring relief to refugee camps in Iraq and other places of humanitarian crisis. Men and women, fathers and mothers, brothers and sisters are being displaced by ISIS and other sectarian regimes. They flee death.

Al Goff, who leads GAiN in the United States, is in one of the hotspots. He writes, “I have seen many natural disasters in my years of ministry, but nothing compares to the devastation of people killing people.”

350 miles to the south of the crumbling house church, a young man once held a sacred scroll. In it were these words: “Learn to do good; seek justice, correct oppression; bring justice to the fatherless and plead the widow’s cause.” He unrolled it and read aloud, “The Spirit of the Lord is upon me to proclaim good news to the poor…”

The Gospel of Jesus Christ reminds us to not lose hope and to speak up for our brothers and sisters. Jesus’ Gospel shines brightest in the darkest caverns of human degradation.

Al tells of a man who would not stop kissing him after receiving a wheelchair for his mother-in-law. He writes of nurses laughing when he volunteers to be the first to test their blood-pressure machine. Another nurse rejoices when boxes of medical supplies enter the camp clinic. A displaced family marvels that anyone would go to such trouble to bring help.

Al writes of Christians in the area: 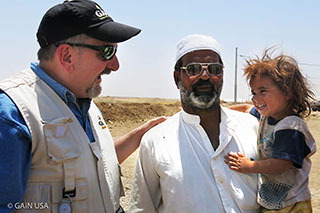 “They are just tired of seeing friends die or suffer or leave. These Christian workers had to flee their home in Kirkuk and Baghdad along with their disciples. And now this. The constant conflict has taken an emotional and physical toll.

“But they are encouraged because Global Aid Network came to help. These Christian workers received a big boost of hope after seeing that people in America and Europe are committed to bringing the love of God to this war-ravaged part of the world. This hope came in the form of humanitarian action and proclamation of the good news to Iraq.”

In Iraq and other countries where there are Syrian refugees, GAiN has been able to supply food, wheelchairs, clothing, heaters, shoes and blankets.

And GAiN isn’t just seeking to bring food and medical supplies, but to connect these people in shock to trauma counselors, people who will care for them, and the hope that only God’s love can bring.

When we hear the foreign words and sounds of desperation, we can look to Jesus, remember our house church in the desert and give of what we’ve been given.