A Military Veteran uses the JESUS Film to reach other language speakers. 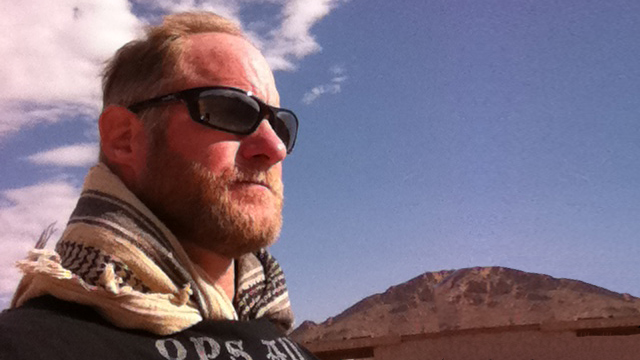 As a member of the U.S. Army’s Delta Force unit, Tim Burke was “trained to do things at the highest level.” This included weapons handling and explosives training.

When his beeper sounded, he was ready to go, literally with no notice sometimes. “We had winter bags, jungle bags, assault bags, chemical and biological warfare bags. Everything was labeled and packed and checked and so you just walked in picked up the bags you were told you would need and walk out the door--literally that fast,” he says.

Although he retired from the military after more than 23 years, his new gig has similar surroundings. Tim helps train elite military units by creating scenarios similar to where they will be deployed.

Tim recruits native speakers from war areas who now live in the U.S. They’ll serve as role players in these training operations, using their linguistic skills and cultural background to give the soldiers real-life training.

The training helps the soldier, but helps save the lives of innocent people as well, says Tim. “It’s really a win-win situation.”

Tim’s about saving souls as well. His friend Doug gave him some multi-language JESUS film DVDs, based on the Gospel of Luke, to give out at his training. He wasn’t sure how they would be received.

“When we showed up at the hotel and we were getting our bags out, and I saw those JESUS films in my bag and at the moment of truth the Holy Spirit kind of prodded me,” says Tim.

So he pulled out about 20 DVDs from his backpack and said, “Hey guys, come here for a minute,’ They gathered around and he said, “I know what you guys believe, but I brought a film that talks about Jesus’ life and I thought you guys might like to watch it.”

Then Tim told them, “it’s in Pashto and Dari,” and he couldn’t get the JESUS films out of his hands fast enough.

The next day, they went out for training and during the day one of the guys came up to him. He said, “Hey, I heard you handed out some videos about Jesus and it was in Pashto and Dari. Do you have any more?”

“Yeah, I think I have a couple of more in my room,” Tim said. “Why don’t you stop by after work when we get back to the hotel and I’ll give you one.”

Standing outside his hotel room door, 5 or 6 Afghan men waited for Tim to arrive so they could get a JESUS film.

“God broke my heart as I got to know them and realize that they’re reachable,” he says.

One of the guys that I gave the film to that night turned and walked away and said, “This will be really neat to show my kids.”

“That’s when I closed the door and I wept because I realized what a far-reaching impact it was having,” Tim says. “I’m just a servant out here doing what I am supposed to be doing and the Lord’s given me a little ministry here.”