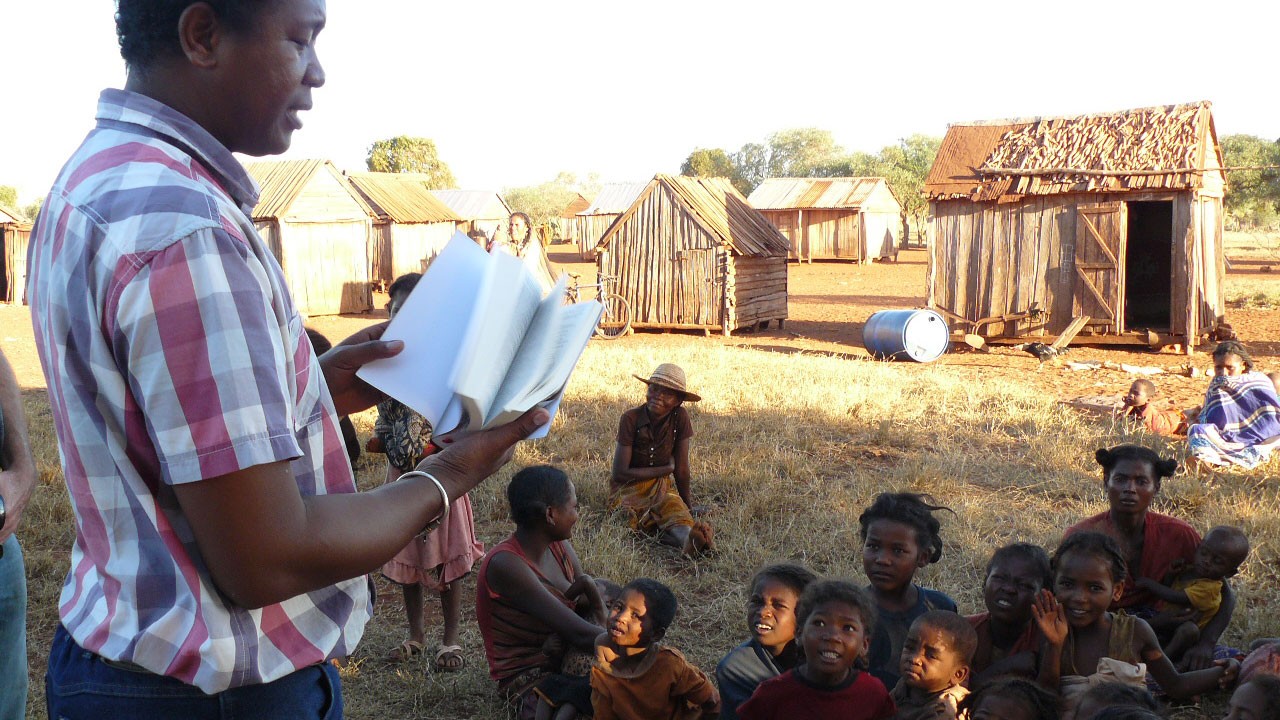 Southwestern adopted the Antandroy people of Madagascar, and this year marked the seminary’s fourth mission trip to this East African country. As in years past, the team’s efforts this year comprised both one-on-one evangelism as well as mass evangelism, which included preaching, storytelling, and showing the “Jesus” film.

One such mass evangelism experience took place among the extended family of one of the Southwestern team’s translators. Interestingly, though, the experience was not part of the team’s original plan.

The team had intended to visit another location but was prevented from doing so. Although this was initially viewed as a disappointment, the team soon realized that this was actually God’s appointment.

The team went instead to the village of one of their translators and engaged in storytelling evangelism. The translator’s extended family gathered to listen, and 22 of them made professions of faith.

As Keith Eitel, dean of Southwestern’s Roy Fish School of Evangelism and Missions summarizes, “What we thought was a disappointing change became what God was really planning.”

One of the mission team’s ministries unique to this year was an effort to train local Antandroy leaders. The IMB missionaries in the area with whom Southwestern has partnered, Adam and Suzie Hailes, are tasked with facilitating the growth of local clusters of believers into churches.

Eitel says this is accomplished by investing in the leaders who are surfacing in these cluster groups. Eitel, as well as Assistant Professor of Missions and Islamic Studies Dean Sieberhagen, assisted the Haileses’ efforts by leading a small pastor’s conference.

Master of Divinity student Nirintsoa Mamitiana, who is an Antandroy, says he was privileged to translate for Eitel during the conference. He says these leaders were challenged to filter their culture and tradition through the Bible, not the other way around.

“One person said that his family had been looking down on him because his daughter passed away, and his family wanted him to bring a cow to be sacrificed to take the curse out of his life,” Mamitiana recalls. “But as a Christian, he said he didn’t want anything to do with that [cultural practice] anymore. After discussing with his family, he decided that he would still bring the cow, but not to sacrifice it; he wants that cow to be alive so that whoever sees it will be reminded of the life that Jesus has given his daughter.”

Following the conference, the Southwestern team watched as these church leaders baptized 22 new believers. Mamitiana recalls, “It was really amazing seeing all of them coming out of the water, rejoicing and screaming ‘hallelujah.’”

Mamitiana says he has not previously seen as much hunger for truth and for God as he saw in his fellow Antandroy this year. “The people were open to the Gospel,” he says. “They were very receptive and eager to know more about God. I loved seeing people taking a stand, saying that they want to live for Jesus alone and willing to leave tradition and witchdoctors.”

He adds that he is excited about the future of his people and looks forward to returning to Madagascar after completing his studies at Southwestern in order to establish a Bible college and perhaps, one day, even a seminary.

“The future is bright, and this gives me motivation to work hard and finish well my study here,” Mamatiana says. “Thank you, Southwestern, for adopting my tribe and for all the investment that you are doing there. I look forward to going with next year’s team.”

“We’re stunned and surprised as God blesses beyond even what we could have imagined,” says Eitel. “So that’s probably the most eternally significant kind of blessing – to be able to see God call people to Himself.”

When you don’t speak their language