Miss Margaret and her team converged near the homeless encampment, hidden in the shadow of the Dallas-area bridge. Despite the tepid warmth of the sun, the sharp wind swept the biting cold into the flimsy makeshift shelters. 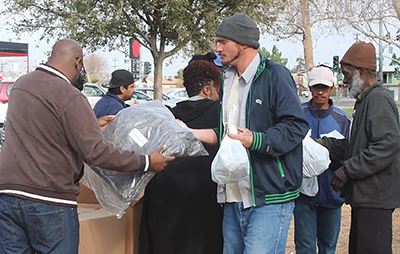 As founder and director of the Metropolitan Dream Center, Margaret James devoted herself to providing clothes and food to those living in the dark haunts of poverty in a cosmopolitan area enriched by industry, from oil and defense to technology and financial services.

The mission for that day was to distribute Homeless Care Kits, each containing a blanket, scarf, hat, socks, gloves, toiletries, and spiritual materials. The kits were a gift from Cru® Inner City, which provides its Compassionate Products™ to partner ministries. Other Compassionate Products provided by Inner City include Boxes of Love®, PowerPacks® backpacks and Easter Bags.

Miss Margaret discreetly picked up one of the care kits and put it aside to ensure the man's efforts would not be in vain. When Jacob finally came face to face with Miss Margaret she presented him with the kit, neatly rolled up in the blanket. He grabbed her hand. 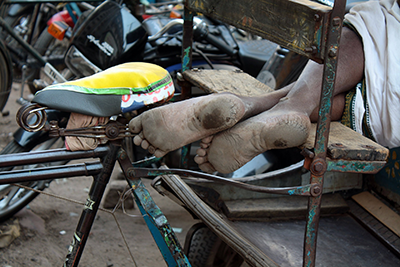 "Thank you," he said emphatically.

"You are so welcome," she said, glancing down.

Despite the cold, Jacob was barefoot.

"His feet were bursting open, with blood running out of them," Miss Margaret said.

"Sir, where are your shoes?"

"I don't know," he replied, his whole body shaking.

Acutely aware that his plight ran deeper than a lack of warm clothing and footwear, Miss Margaret asked about his spiritual condition.

Miss Margaret seized the moment, carefully sharing the plan of salvation. Her words captured his heart, prompting Jacob to receive Christ on the spot, transforming the trampled soil under his bloody feet into holy ground. 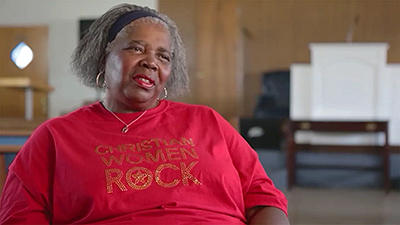 With the matter of his eternal destination settled, Miss Margaret turned back to his physical needs, arranging to take Jacob to a doctor. Strangers only weeks before, she was there at his juncture of great pain. He had cancer, and it had metastasized. The stunning diagnosis prompted a somber realization by Miss Margaret: Jacob couldn't face his health crisis alone.

"Where's your family?" she asked.

"I don't think I have any family," he responded.

After digging into his background, Miss Margaret discovered Jacob also had Alzheimer's and had been missing from his family for nine years — until she reunited him with a son and three daughters.

Not long after the cancer diagnosis, Miss Margaret visited the hospital where an animated Jacob greeted her warmly.

The disease progressed and before long, one of his daughters called.

"Can you come over because I feel he's transitioning," she said. "I don't think he's gonna be with us long."

Even as cancer sapped his strength, Jacob was exuberant when he spotted his friend.

Not long after the pair prayed for each other, Jacob passed away, having graduated from seeking refuge under a bridge to securing passage on The Bridge between heaven and earth — thanks to Miss Margaret's compassionate heart and a Homeless Care Kit.

Photo of feet by Nina Edmondson/Pixabay

A Homeless Care Kit warmed Jacob's body but, more importantly, warmed his soul, bringing great joy during his final months and leaving an eternal legacy for his family. Share Jacob's story on Facebook or other social media platforms by using this link: