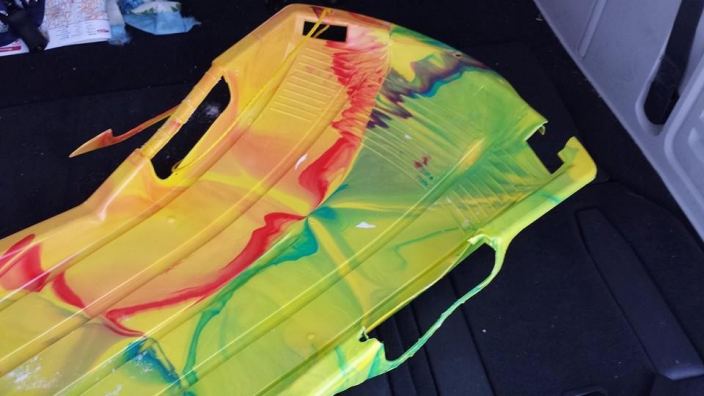 This would be perfect. Our four year old (Austin) had just received a slick sled from my parents for Christmas. A week earlier, Austin and I had gone to a nearby sledding hill with big, heavy snowflakes falling all over us. He had a blast and couldn’t wait to do it again.

Now it was time for more family fun. My wife, Erika, was going to join us this time for some serious sledding. Our young lad is Mr. Adventure. He slashes and jumps around our house embodying every superhero he knows (and some he’s made up). And he loves speed. Sledding was a no-brainer for this kid. So off we trudged from the minivan to the sledding hill with Devoted Dad in the lead. I was secretly hoping a local photojournalist might be nearby to capture the moment in anticipation of the upcoming Father of the Year award. This would be perfect!

My first clue that this day might be a little different than the week before was when we had trouble climbing the sledding hill because it was so slick. The previous week’s snowfall had given way to many sled runs by neighborhood kids, leading to packed-down, icy routes. No big deal, right? Just a little more speed for Mr. Adventure! Go get 'em, tiger! Erika waited at the base of the hill where there was a long, flat stopping area for the sledders. Austin had made many runs by himself the previous week - why should now be any different?

“Want me with you or by yourself, buddy?” I asked.

“By myself” said my bold, confident kiddo.

“Should he really go by himself?” asked the loving wife and mother below.

Austin settled himself onto his sled. And I pushed.

Have you seen National Lampoon’s Christmas Vacation? Do you recall Clark Griswold blazing a trail through the snow (and traffic!) with his greased up saucer? It seemed to me that life was imitating art. (Yes, I did just call Christmas Vacation "art.")

As Austin picked up speed heading down the hill, it quickly became apparent that the stopping area, while long and flat, might not be long and flat enough. I began my sprint down the icy hill when I saw Erika begin to turn around to chase Austin as he barrelled toward the slough .

Neither of us would catch him.

Just in front of the slough were a bunch of scattered dead trees and branches. As Austin raced away from us, we finally watched him run [CRACK!] right into a small but sturdy dead tree stump. Austin flew straight up and out of his sled and landed in the snow. As we reached him, he was wailing, understandably. He stood to his feet (praise the Lord!) and I began to ask him to move his arms and fingers. He did and amazingly he was uninjured.

Once we confirmed that he was ok, I did what any caring and compassionate father would have done: I distracted him with humor. “Dude, you were burnin’!” I said with a smile. Giggling though his tears, he repeated back: “I was burnin!”

At the top of the mountain my son, at the peak of his anticipation and joy, was thrust by his father down a hill toward a slough! Austin might be tempted to believe that I don’t have his best in mind. That I don’t want joy for him, but instead that I want him to fly into a tree at high speed only to be launched head over heels from his sled!

Don’t we sometimes think of God this way? Oh sure, I may be experiencing some blessing at the moment, but just wait: God will surely push me down the hill toward disaster before too long. He doesn’t really want me to experience too much joy or satisfaction in life.

In Psalm 16, David reminds us that our heavenly Father is the only source of good: “I have no good apart from you” (v. 2). The inheritance he has for his children isn’t an icy path toward destruction but is “beautiful” (v. 6). God’s path for his loved ones is glorious!

You make known to me the path of life; in your presence there is fulness of joy; at your right hand are pleasures forevermore. - Ps. 16:11

David certainly experienced hardships, sometimes at the sinful hands of others and other times by his own foolishness and sin. We aren’t promised that we won’t feel like we’re hurtling down the hill toward our death. Yet we have hope in the risen Christ! “For you will not abandon my soul to Sheol, or let your holy one see corruption” (v.10). Jesus set his face toward his death and marched forward. Because he knew it was “the path of life.” He knew the One in whose presence was fulness of joy, pleasures forevermore.

We did sled more on that icy day. Though the sled had cracked a bit (trees will do that, apparently) Austin wanted to go down the hill again but only if I went with him. He knew he could experience more joy if his father was right there with him, holding on to him for the ride.