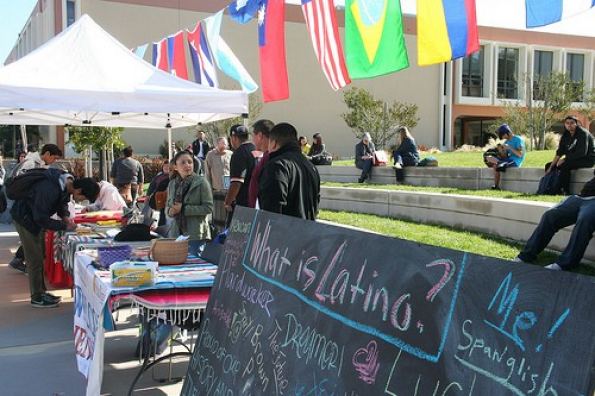 Learn Something: Listening to Latinos

I was sitting down with two student leaders who are involved with Destino at UCLA when we got into a conversation about reading the Bible from a Latino point of view. I asked them, "What stories stand out to you most as a Latino?" It was only a matter of minutes before we started a deep conversation about how we each experienced life uniquely because of our ethnic backgrounds. As I listened to them share, it became apparent to me that this conversation had so much meaning. These students were sharing things on their heart and mind that few people had heard before. In this moment, these students used their voices to communicate a powerful truth. Latinos can see and understand things about God in ways you may never expected.

(I may be the first male writer to use the story of Esther as a text to make a point. So, let's try it.)

In the book of Esther, the queen finds herself both in a place of great influence as well as great isolation. Being a Jew in captivity, she has the benefits of living in the majority culture that she married into, yet is bound by laws and cultural expectations.

As I asked my students what they identified most with the story, they each responded with different answers. One of them observed that just like Esther, many Latinos marry outside of their culture (in our case, white people.) She noticed that even though Esther had married into a new family, she still felt very compelled to serve and save her own people. That deep care and concern is clearly coming from a deep love and compassion for the whole. This bond and collective care is a very strong Latino value and she connected with the story through the bond of family identity .

The next student shared that she saw Esther in isolation from her Jewish community. As a Latina, she had often felt that, compared to Caucasian students, there were significant differences when it came to belonging . In the majority culture, Esther benefited from the position and life that she was granted, yet God created her uniquely for a specific purpose. Her ethnicity would play a significant role in the saving of her own people.

My wife (who is white) was also at the table. She admitted that she did not ever notice those things previously mentioned by the Latina students. She said how she saw Esther as a woman of great influence and power in the Bible. When she reads the book of Esther, she views it as a picture of God using the most unlikely of people: a woman brings salvation and change.

I asked myself during this conversation, are these things wrong? Isn’t there one vantage point from which we should be reading these stories? Didn’t God just want us all to understand the Bible from one perspective, God's way? It was then that I remembered the what Justo González described as the landscape .

González writes about reading the Bible through hispanic eyes in this book Santa Biblia . He starts the book by describing how people from different ethnic, social, and theological positions see God and the Bible from a certain vantage point. It is as if we were all standing in a valley, looking at a beautiful landscape. As we all stand in different places within the valley, we focus on specific aspects of the valley. From one vantage point, we see the sun shimmering off the water. From another viewpoint, you see a forest of trees. We could go on and on about the specifics of  the landscape but the point is that we focus on that which we see most clearly. Looking at the world from my perspective, I see things in light of campus ministry. I want to unlock the potential of this generation to change the world for Christ. You church planters out there have a much different outlook on the world and role people play in it.

Since beginning to work with the Destino Movement in Los Angeles, I have been discovering more and more about Latino perspectives. At first I thought that there was just one Latino perspective and I could quickly pick up on it and learn to lead from that viewpoint. It became very clear that there are multiple perspectives that make up the Latino perspective. During my conversation with both students that day on campus I witnessed something very unique: these students were sharing some of their deepest concerns and insecurities as Latinos. For the first time, they had communicated out loud about how majority culture had hurt them or ignored their God-given ethnicity.

Early on in my ethnic identity journey, as I was asked to share about my own experience in Cru, I would become angry. I would be angry that I had to explain why I am not white. Why should I have to explain it? If I was with Latinos or Asians (I am half Chinese), this conversation wouldn't be necessary. Yet, as God revealed to me how my ethnicity was important, I saw it as a blessing rather than a burden.

Although the students I was talking with referred to Queen Esther, you can ask Latinos to read the stories of Moses, Daniel, and Timothy and they will share with you a connection that you may not have noticed before. For me, Moses as a bi-cultural person and growing up in a culture not of his own played a huge role in my life. Seeing how God used his position and education to lead a people gave me the hope that I could do something similar.

My hope in writing this is to help you see that Latinos can help you learn something about God.

If you find yourself working with students of color, I hope that you begin to ask the question, “What can I learn from their perspective?” As you practice listening and ask more questions about their story, you will begin to see something new. It is a powerful moment to be part of. It is an opportunity to listen and acknowledge their experiences. For people of color, I hope that this is a reminder that we are all in process with our ethnic journey. Some of us have had a lot of hardship, others not so much. Ask yourself, How has God given me a unique position to bring to hope of Christ to my world?

The Destino Movement exists to give students of color a voice and express their relationship with God in a culturally revenant way. Creating shared experiences with students opens up the door to deep spiritual conversation that will help bring people closer to a real picture of Jesus Christ.