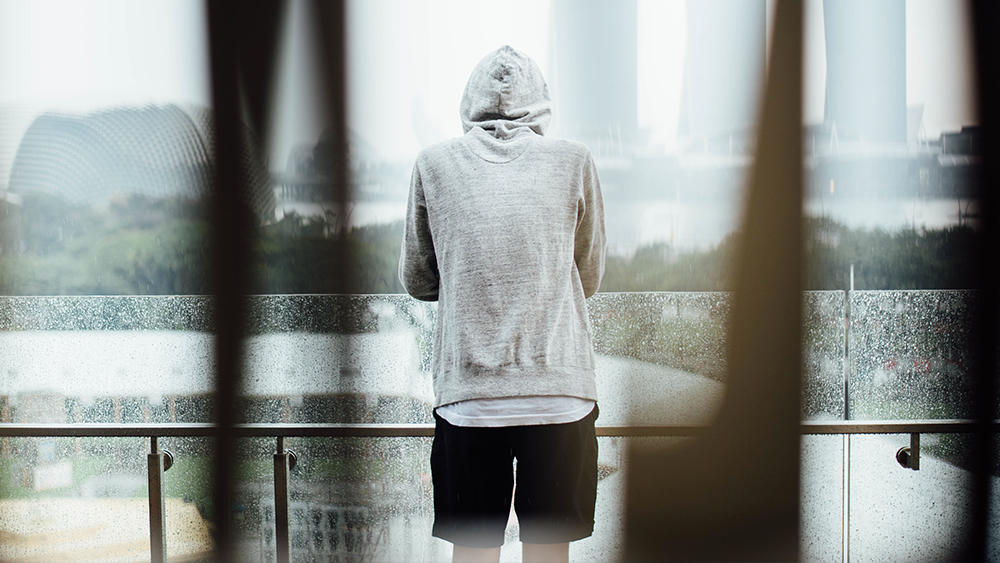 We’ve compiled a list of articles on different life struggles, such as addiction, depression, spiritual dryness, marital strife and more. If you are suffering from something specific today, browse this list of resources that can help you on your journey.

At the mic, a man grasps for words.

His pain is too much to speak of. This is just a men’s church retreat. What comfort can come to him as he talks about raising a mentally handicapped child — his first son — who has never been able to communicate more than a broken sentence? How could he possibly explain his pain to the rest of the group?

Hospitals can’t contain the pain of this world. It spills out like a flood. Today, like a torrential river, pain seems to flow, ripping through woods and into this cabin in rural Virginia.

As I listen to the man at the mic, I hear his pain, but there’s also deeper processing going on in his life. My father, an Old Testament scholar, has just finished speaking on the book of Job.

Jabbed into the middle of our Bibles, this book shows us that Christians aren’t spared pain. It almost feels like a threat: You will suffer. Yet the message of Job is far from a threat. If we live, we suffer, but this book is meant to steady us in trials.

“Life is pain, your highness. Anyone who says differently is selling something.” — Wesley, in “The Princess Bride”

As other men move to the mic to speak about their wrestling, there’s a tone of realness, rawness and hope. I believe it is coming from what we’re learning as we study Job.

My dad explains that it’s essential to understand the courtroom drama that frames the book. As Job opens, a great assembly is drawn up in heaven. The attitude of the assembly is not entirely clear. But in the middle of the assembly “the accuser” arrives: Satan. God asks him where he’s been.

Satan replies, “From going to and fro on the earth, and from walking up and down on it” (Job 1:7, English Standard Version).

The tone in the original Hebrew is subtly derisive, hinting that Satan’s been looking down on God’s so-called “good” creation.

God asks, “Have you considered my servant Job, that there is none like him on the earth, a blameless and upright man, who fears God and turns away from evil?” (Job 1:8, ESV).

God points out Job’s genuine relationship with Him.

Satan’s accusation is an old one, carrying with it a host of connotations. I can hear the flow of follow-up accusations implied in Satan’s quip:

“Job doesn’t really love You. You call him blameless, God, but You’re either a fool or a liar. Either You just don’t get that Job only loves You for what You’ve done for him (You’re a fool), or You do get it and just won’t admit it (You’re a liar). The fact is, Job isn’t all that good. And neither are You when You call him blameless. You’re not trustworthy. You’re not loving.”

Any of these sound familiar? They do to me. I’ve asked similar questions.

The heavenly assembly is shocked. I imagine shields and swords clatter.

Poor Job. His mission will be to suffer, agonizingly. But it won’t be meaningless. His torture will be in defense of the very honor and integrity of God and His Word. He is never told why he suffers, but that is part of the test.

Job’s life will soon be ripped to shreds. He’ll lose everything.

But what takes up most of the book is a fascinating dialogue between Job and his comforters. They come and sit with him in silence for seven full days and nights. At first they don’t utter a word. They’re good friends.

Yet when they open their mouths, his good friends become his chief tormentors. Job asks them, “How long will you torment me and break me in pieces with words? ... [You] make my disgrace an argument against me” (Job 19:2,5, ESV).

We see the argument early in the book, and it escalates throughout. Job’s friends believe that God rewards the good and punishes the bad. They ask the question in myriad ways: “What have you done, Job? Surely you’ve done something to deserve this.”

“As I have seen, those who plow iniquity and sow trouble reap the same.” — Eliphaz (Job 4:8, ESV)

Now before we get too harsh with Job’s friends, try to think of the last time you saw a friend in pain. Did you try to figure out what they’d done wrong? We do this all the time. When someone’s suffering seems inexplicable and scary, we search for reasons.

Who are we comforting: our friend or ourselves?

Job’s pain is a problem for his friends. The entire book is a thesis against formulaic Christianity, which says, “Be good, have faith and you’ll be OK. If you aren’t OK, the fault lies with you.”  This formula will make us brutal with Christians in pain.

But how are we (or our friends) to deal with God when in pain?

As Christians, we can hide our pain behind a mask of false happiness.

But we also know that, through pain, sometimes we’re strengthened, softened and drawn toward God.

Simply put, pain drives us to or away from God. And sometimes people who look as if they are running from God are indeed running toward Him. The opposite can also be true. Just line up a battered Christian next to a teeth-baring legalist.

We see all sorts of emotions run their course in the person of Job. But he also has it out with God. His friends never even address God. Job’s sheer tenacity toward God shows genuine faith in a God who is good — a faith that God planted deep in Job. They have an authentic relationship. Job is free to throw his pain at God.

Job definitely gets riled up. Listen to this: “I was at ease, and He broke me apart; He seized me by the neck and dashed me to pieces. … He slashes open my kidneys and does not spare; He pours out my gall on the ground” (Job 16:12-13).

And Job’s anguish makes Him empathetic. He says He would comfort differently: “I could also speak as you do, if you were in my place. … The solace of my lips would assuage your pain” (Job 16:4-5, ESV).

We can know that God is present and active in our distress, whether we feel Him or not. Yet our pain does something even more mysterious.

Read more about this mystery in Part 2, “How to Find Hope in the Midst of Suffering.”