A South African goalkeeper earns the trust of his team. 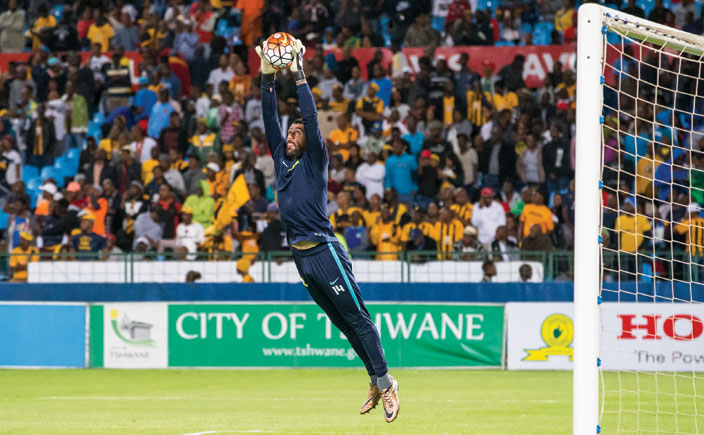 In Cape Town, South Africa, 33-year-old Wayne jogs out under the lights of a stadium.    Years ago, a 6-year-old would run out under a single light bulb that lit his schoolyard. Taking his spot in front of a makeshift soccer goal, he bent his legs and pulled his hands up, ready. His father set down a ball. They began.

The setting has changed. The game stays the same.

Today, Wayne warms up for the Mamelodi Sundowns, one of the top professional teams in South Africa.

Wayne crouches low, stationed in front of the net. A ball zips by him, unreachable. Another ball flies in, dipping and swerving. Wayne gets a piece of it, but sprains his index finger in the process. With no time to stop, he dives to the left. Misses.

Radar guns register well-struck soccer balls moving at speeds of up to 130 mph. Wayne learned in his schoolyard that there is no way to stop them all.

His team must trust him as their last line of defense. If self-doubt creeps into his thinking, one mistake, one goal, could make the difference between victory and defeat.

Yet today, Wayne knows that playing probably won’t be an option either.

For years he started as Sundowns’ No. 1 goalkeeper, but after warm-up and a locker-room chat, Wayne will spend today on the bench. He sits beside the coaching staff, the men who hold his career in their hands.

Prior to the game, Wayne invites Bruce, the opposing team’s chaplain, to speak at a Bible study for his Sundowns teammates. There, 13 players, decked in light blue and yellow sweats, shuffle chairs into a circle.

“Over to you, Brucie,” says Wayne.

The goalkeeper answered with, “I am Liverpool’s No. 1.”

Wayne looks on as Bruce moves to a paper easel, grabs a marker and writes the words “Do,” “Have” and “Say.” He explains that, like the goalkeeper in his story, the world defines you by what you do, what you have and what people say about you. 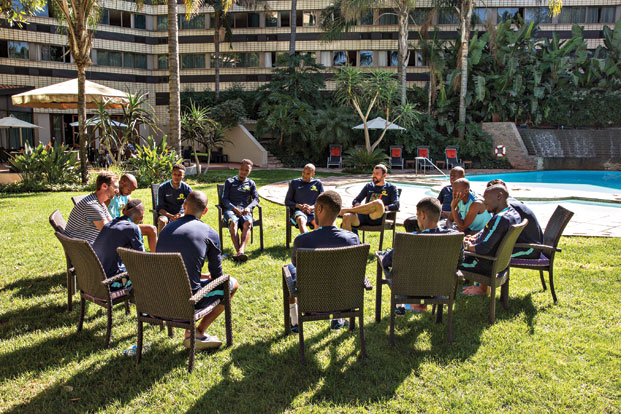 Then Bruce draws a vertical line beside the words. Now he writes the words again, saying that God defines you by what He has done, what He has and what He says. Picking up his Bible, Bruce reads the words God spoke over Jesus at his baptism: “You are my Son, whom I love; with You I am well pleased” (Luke 3:22, New International Version).

Looking around the room and settling on one of Wayne’s teammates, Bruce says, “I want you to imagine today that if you’re in Christ, he goes, Teko, you have a Father in heaven who wants to say to you today, ‘You’re My boy. I love you and I’m pleased with you.’” At the end of the Bible study, Wayne’s teammate and friend Teko gets up, walks to the easel that has written on it the identity God offers, and taps it with his finger, saying, “I need this.”

“This” is what Wayne has gathered his teammates to discover.

Chris, a staff member with Athletes in Action®, Cru’s sports ministry, mentors Wayne. For the past six years, Wayne has taken what Chris has taught him and put it into practice with his team.

Chris says that what Wayne has established with the Mamelodi Sundowns demonstrates what AIA hopes to accomplish with athletes all over the world. If athletes are equipped and have earned the trust of their teams, they’re in the most strategic position to reach their teammates with the gospel.

This past season, Wayne led his teammates in AIA life-skills classes. These courses offer subjects from balancing familial and financial responsibilities to handling the emotional ups and downs of sport. Wayne showed the curriculum to his coach, who said it sounded like something the players needed.

“Do you think I should lead these, or would you prefer someone from the outside come in to teach?” Wayne asked.

The coach replied that Wayne should teach, since the players respected him.

The players voted to make the classes mandatory after hearing Wayne would lead. Now as he teaches life skills, he has a platform to invite teammates to Bible studies where he explains the gospel. His ministry continues to grow despite the frustrations of his playing career.

Wayne has always hated sitting on the bench. He used to start for Sundowns and he played for South Africa’s national team. But as Sundowns signed new, world-class goalkeepers, he saw less and less action.

He struggled with switching off his intensity, which led to envy. “I hated whoever was playing in front of me, wishing they’d get injured,” he says. 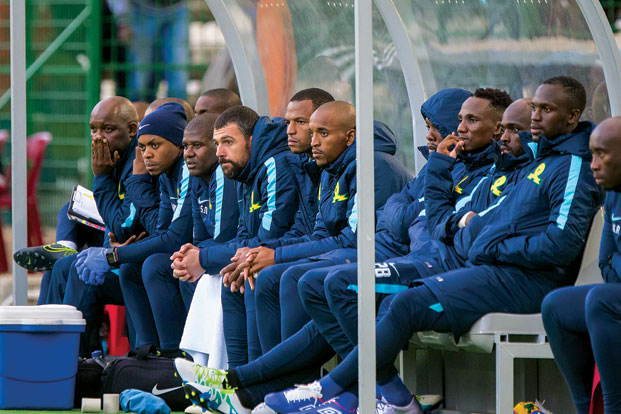 The turning point came when Wayne read Isaiah 43:7. God’s words, “everyone who is called by My name, whom I created for My glory,” struck Wayne hard. His life contained infinitely more meaning than his performance.

This inspired Wayne to explore his identity in Christ with the intensity of an athlete. He focused his renewed energy on serving his team and earning their trust.

Wayne has since mentored dozens of players, who have spread to various soccer clubs across Africa and Europe. Andrew, another AIA staff member serving now at UCLA, says, “It’s an atmosphere that Wayne has created for his teammates to encounter biblical truth.”

In the sun-drenched courtyard of a hotel in Pretoria, 13 players gather beside the pool to study Scripture. Wayne opens his Bible and speaks from Matthew 6:25-33: “Don’t worry about your life … but seek first God’s kingdom and His righteousness.”

Wayne tells the players how the truth of the cross frees him. “This right standing before God has nothing to do with me,” Wayne says. “It’s what Jesus has done, and that’s what’s beautiful.”

This truth transformed Wayne’s perspective on his career. On the bench he feels free from the relentless pressure to figure out why he’s not playing.

“Remember God’s perfection, what His standard is,” Wayne tells his team. “None of us can attain it. It’s only what Christ has done. So it should actually take off, not put on, any burden.”

Later in the day, the players will experience the highs and lows of professional soccer as they face off one of their main rivals, the Kaizer Chiefs.

Wayne knows that the lives of professional athletes can contain realities that clash with the truth of the gospel. They can feel isolated by the need to compete even with their own teammates, and something must prepare them for the barrage of harsh criticism from fans, coaches and the media.

“If we rely on ourselves, we will fail,” Wayne says. “We need to rely on Christ.”

When Wayne trains, he competes with great intensity, yet he genuinely loves his teammates. Wayne will often place a welcoming arm around the shoulder of a new player. Though Sundowns’ management hasn’t selected him to start, Sundowns trust Wayne in the way he most desires.

In the courtyard, Wayne doesn’t open his Bible for the words he wants to get across to the teammates. He can find the words tattooed on his chest: “Not by might, nor by power but by My Spirit, says the Lord of hosts” (Zechariah 4:6).

Another game in another city: Wayne laces his gold cleats for action. Today he may face a game where he plays and stays on his toes, or he may sit on the bench and bite his nails. But when Wayne wraps his wrists to protect from sprains and slips on his gloves, he prepares for either, a goalkeeper secure in a God he can trust.