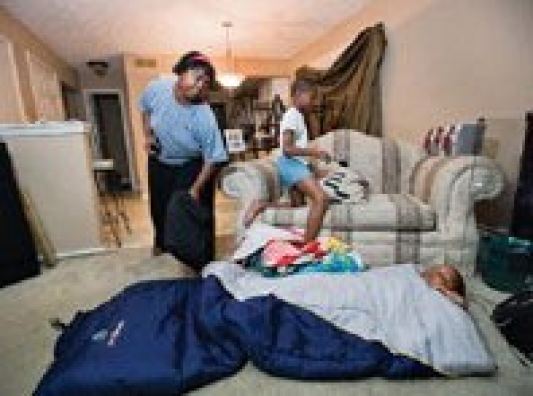 Her Song To Sing

LaDonna Wilburn wanted to quit the band before it gave its first performance.

A strong alto, she auditioned with the Impact Music Project and was ready to tour the country, excited to tell at-risk youth how Jesus can change lives.

But she balked when the team wanted to build the band’s hour-long evangelistic set around her story — including that she had become an unwed teenage mother.

In her usual fashion, LaDonna responded bluntly with a bit of sass.

Too much heartache to reopen old wounds from life scars that she’d buried 4 years ago.

This Was Her Song to Sing

But LaDonna’s journey was the type of story that the project director, Rasool Berry, knew would reach audiences during the 7-week mission. It just took a lot of convincing from Rasool to help LaDonna see that she was a dynamic communicator as well as performer.

LaDonna learned about her singing gift early on in life, when she began humming while cleaning the sanctuary at Faith Church of God In Christ in east Indianapolis.

“Who is that humming?” the music minister asked, stunned to find pure notes and harmony coming from 9-year-old LaDonna.

Soon she was singing lead with the adult choir and wowing thousands at the denomination’s national assembly.

But her parents kept busy; if they weren’t in church, they hosted prayer meetings at home.

She Wanted Love and Acceptance

LaDonna, one of the oldest, mothered her 6 younger siblings, walking them home from school, cooking meals, making sure they were bathed — all primarily unappreciated by her parents.

By age 12, LaDonna was fed up. The girl in the frilly dress who led the adult choir gave up music and began looking for love and acceptance she never felt from her busy parents.

She spent time with a rough inner-city crowd, where she was sexually active and experimented with numerous drugs.

Her parents transferred her to a suburban high school, where her grades improved and she was making an effort at a relationship with her parents.

But a last fling with her boyfriend at spring break changed the course of her life. A few months later, she found out she was pregnant.

“I was so mad at God,” she says. “Why would He let this happen? Why would He give a child to me?”

The father’s aunt stopped LaDonna’s plan to abort, and Micah was born when LaDonna was 16.

For the next 7 years LaDonna jumped into several relationships, eventually having her second child, Elijah, with Jason, a man she fell in love with while they were both working at Taco Bell.

She found out Jason was addicted to crack cocaine when she was 7 months pregnant, but he rarely relapsed, so she hoped they would build a home to nurture the boys.

Hoping for Happily Ever After

“After Elijah was born, it was like magic,” LaDonna says. “We were playing games together at night, and I remember walking through our apartment and thinking that all we needed was a dining table to be a family.”

Then Jason pawned 3 cars and beat her one time.

She moved in with her brother Sammy, who was active in church. After the fourth Sunday of attending, LaDonna walked the aisle with Micah at the altar call.

“Cold turkey, I stopped smoking cigarettes and weed, and [quit] all drugs, and quit drinking alcohol,” she says. “But Jason was more difficult to pull away from.”

LaDonna continued to see Jason until he was sentenced to prison for two-and-a-half years.

Becoming That Girl in the Choir

She then immersed herself in church, attended services almost daily, and was soon being noticed by many in the 3,000-member congregation as “that girl in the choir” because of her charismatic stage persona.

LaDonna was leading others to worship a God she still didn’t really know in 2003.

Then Sammy persuaded her to attend a conference sponsored by The Impact Movement, a ministry launched by Cru that is now a sister organization aimed at seeing spiritual renewal in the African-American community.

“A light went off in my head, ‘You mean I can really see God like that in my life every day?’” she said. “I prayed, ‘Lord, I don’t want to be this rebellious child anymore. I’ll do what You want me to do, go where You want me to go.’”

That prayer landed LaDonna just a few months later on the mission project with the band Infinit Impact. The Impact band was one of 5 bands touring the country that summer as part of Keynote, the music ministry of Cru.

Keynote and The Impact Movement are partners together every summer, sending a band specifically to reach African Americans.

Before hitting the road, LaDonna lived with the team for a month to prepare the show, study the Bible and sharpen communication skills. That’s when Rasool suggested LaDonna’s story would relate well with the audiences they were trying to reach.

The only problem for LaDonna was that she would have to tell her story — at every performance.

Mad that Rasool and his wife, Tamica, were forcing her to confront painful areas of her life, LaDonna threatened many times to quit the mission before it ever began.

Finally, she determined to trust God.

“God used the project to help me face my issues that I thought I’d dealt with,” she said. “I’m in a wonderful church, but wasn’t facing all the demons inside of me. I had been trying to put a bandage on them.”

Telling her story was part of the healing process.

Once LaDonna gained that confidence, the results were eternal. At numerous performances in 12 cities, LaDonna talked openly about her failures and triumphs and Christ’s healing in her life — 161 people indicated decisions to pray and receive Christ.

At Infinit Impact’s last performance, at a residential shelter for expectant moms, LaDonna told how the women could have an intimate relationship with God.

Before she finished, a 17-year-old came forward and wept on her shoulder, saying she didn’t want to return to her drug-dealing boyfriend.

“We were in the same boat,” LaDonna says. “We think we love these men in our lives but only because our view of love is tainted. What Jason gave me was not love. God is love.”

When the summer tour ended, LaDonna went back to Indianapolis, where Jason was now out of prison. When Jason’s brother was killed, LaDonna briefly let him back into her life until he stole a car to buy drugs.

He was sent back to jail and LaDonna was left struggling with her failure.

“I learned on the tour that I wasn’t really healed,” she says. “I really thought I knew what I was talking about, but then I come home and go back to Jason. It was like Peter saying, ‘I’ll go to the cross with you, Jesus,’ then the rooster crowed. That’s just where I am. God is still faithful.”

LaDonna constantly talks about Jesus with clients at the spa where she’s a cosmetologist, and she’s enrolled at a local university to study journalism.

She’s making decisions to put healthy boundaries around herself and her sons, like moving into her own apartment.

“I came back from the project focused on being a mom,” she says. “I just want to stand on my own two feet and encourage them to do everything for Jesus.”

She also sings with her brother’s gospel group and recently recorded a song with words he wrote, but which are especially meaningful to her:

Right now, I don’t want to be the same no more
I’m starting over again.
Save me
Heal me
Fix me
Make me over
I’m not gonna be the same.

Thanks to her summer with Impact, she can now lead others in the song and mean it.

How “The Dream” Really Can Come True

Igniting a Fire for God

Latest Stories in The Impact Movement

Encouraging College Students When It's Not Your Job

"Darnell J. Wilson climbed on a table and said, 'We are The Impact Movement. Who wants a free water bottle?' He started throwing bottles into the crowd. 'Surprisingly, people caught ‘em, but one person got hit in the head,' he said."

How to contact The Impact Movement including their mailing address, phone number and e-mail address, as well as hyperlinks for short-term mission and career opportunities

A Cry of Hope, A Call to Action

Charles Gilmer explains the mission of the Impact Movement.