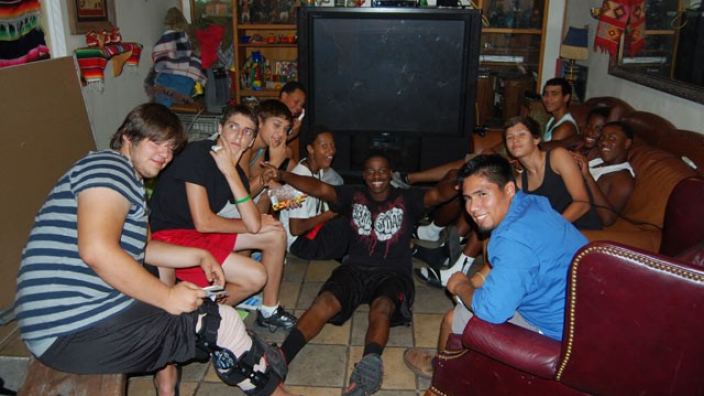 Veering Them Toward Jesus

Players on a Texas football team respond to the gospel.

The aroma, a pungent combination of body odor and pepperoni pizza, hung thick in the Texas air as 85 freshman boys squeezed their bodies, pads and all, into the team meeting room. The pep talk after that “two-a-day” practice wasn’t given by their football coach but instead Cru staff member, Kirk Freeman.

Kirk, a former Division 2 football player, speaks the boys’ language. After giving counsel on finding balance and success in high school, he proceeds to outline the message of salvation through Christ with a black marker on a flip chart, as if reviewing plays for the team’s Veer offense. Kirk’s words pierce the boys’ hearts like a slicer going through the awaited pizza.

On comment cards after the talk, 51 freshmen from Morton Ranch High indicate that they have placed their faith in Jesus for the first time. They then happily devour the 40 pizzas and gulp Gatorade from icy coolers offered after the voluntary meeting.

“Some of these guys have maybe heard about Jesus before,” says Kirk, “but they had no idea how to have a relationship with Him.”

But this wasn’t just a post-practice, ravenous impulse. A week later no food is offered, and 60 players still show up for the first lesson in how to grow in their newfound faith.

“Although this response is incredible, it’s not unheard of,” notes Cru national high school director, Lee Cooksey. “Students today are incredibly open to conversations about faith. But we typically see only 10-20 percent of students respond to the gospel with this kind of openness.”

A year ago, sophomore Austin Vega was one of the players at this same event. “Some senior friends invited me to a pizza party,” recalls Austin, 15. “At the time, my parents were going through a divorce. It was really hard on me. I was ready to quit sports and not even try anymore. I was looking for something. Then Kirk introduced me to God.”

Like Austin, a chunk of these players from the group of 60 will join Kirk for Friday afternoon touch football games. Others get together over the weekend to watch college football on TV. Here in smaller groups, Kirk, who is himself a dad of 3 kids, can ask more questions about how they are digesting the spiritual food that he’s serving up.

And Kirk multiplies his efforts by involving others. He trains the upper class guys to encourage and mentor the underclassmen. Currently, Austin goes to a Tuesday night Bible study that is led by Victor Luviano, a Morton Ranch graduate now in college who became a Christian himself as a high school freshman.

The Bible study is held at the home of Austin’s teammate, Jonathon Tennyson. Jonathon’s mom, Alice, says she and her husband are delighted to host the 12-15 boys and whip up dishes like rice with chicken and frosted cupcakes (“I know that Kirk has a sweet tooth!”).

“I have offered for the boys to come early to swim in our pool for an added incentive. But they don’t need that,” remarks Alice. “I’m watching these teenage boys love God openly. And the group is growing. It feels good to be a part of this!”

See You After the Pole

Because I've Been There