This version was adapted and expanded by Appalachian State Cru. The goal was to help students fight through the distractions that often keep us from fully loving God and the people he has placed around us. We provided students with simple missions that would challenge them to bring their whole life to bear as Christ-centered laborers. Around 200 students "opted in" and took us up on the iCare challenge. Our students took the kind of faith steps that staff always pray will happen.

One of the consistent takeaways from students was an appreciation for the integrated nature of this initiative. Students were challenged to think about their "posture" just as much as the content of their message.

Feel free to try this, modify it, and make it work for your context, either on campus or on Summer Project. 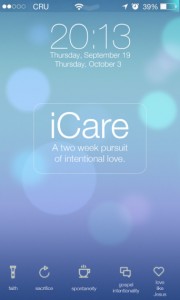 Prof 101: Five Things You Need To Know About Professors