Beginning March 29 through April 5, @CruTweets will be live-tweeting what Christ’s week was like in the days and hours leading up to his execution and resurrection, using the hashtag #AtThisTime on Twitter. Read the larger story from Biblical text providing context and background on what was going on from The Voice translation of the Bible.

We are posting each event in Eastern Standard Time as it reflects the exact sequence of events as if you are standing in Jerusalem. 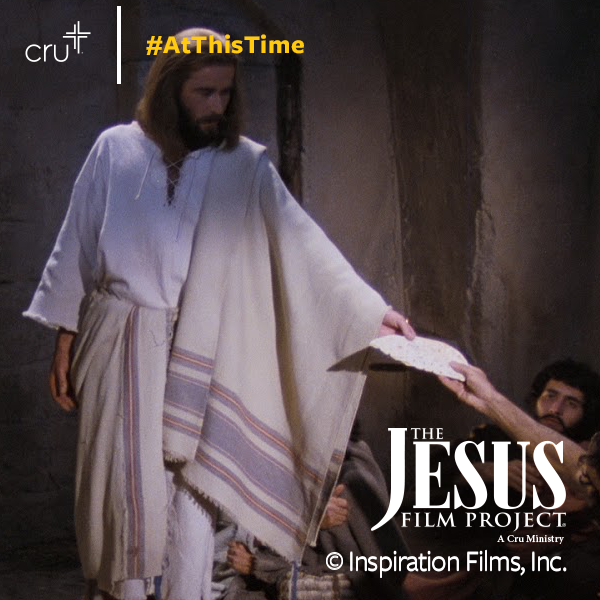 When the meal was prepared, Jesus sat at the table, joined by His emissaries.

The meal that Jesus and His disciples shared is still celebrated today among followers of Jesus. We surround it with varied rituals and music, but the original meal took place in the midst of great drama and tension.

The disciples were arguing, and Jesus was teaching them yet another lesson about life in the kingdom of God. Jesus even spoke of His own suffering and their betrayal and denial. Yet through it all, Jesus’ focus remained on the central theme of His life and mission: the coming of the kingdom of God.

Jesus: It has been My deep desire to eat this Passover meal with you before My suffering begins. Know this: I will not eat another Passover meal until its meaning is fulfilled in the kingdom of God.

He took a cup of wine and gave thanks for it.

Jesus: Take this; share it among yourselves. Know this: I will not drink another sip of wine until the kingdom of God has arrived in fullness.

Then He took bread, gave thanks, broke it, and shared it with them.

Jesus: This is My body, My body given for you. Do this to remember Me.

And similarly, after the meal had been eaten, He took the cup.

Jesus: This cup, which is poured out for you, is the new covenant, made in My blood. But even now, the hand of My betrayer is with Me on this table. As it has been determined, the Son of Man, that firstfruit of a new generation of humanity, must be betrayed, but how pitiful it will be for the person who betrays Him.

They immediately began questioning each other.

Disciples: Which one of us could do such a horrible thing?

Soon they found themselves arguing about the opposite question.

Disciples: Which one of us is the most faithful, the most important?

Jesus (interrupting): The authority figures of the outsiders play this game, flexing their muscles in competition for power over one another, masking their quest for domination behind words like “benefactor” or “public servant.” But you must not indulge in this charade. Instead, among you, the greatest must become like the youngest and the leader must become a true servant. Who is greater right here as we eat this meal—those of us who sit at the table, or those who serve us? Doesn’t everyone normally assume those who are served are greater than those who serve? But consider My role among you. I have been with you as a servant.

You have stood beside Me faithfully through My trials. I give you a kingdom, just as the Father has given Me a kingdom. You will eat and drink at My table in My kingdom, and you will have authority over the twelve tribes of Israel.

Simon, Simon, how Satan has pursued you, that he might make you part of his harvest. But I have prayed for you. I have prayed that your faith will hold firm and that you will recover from your failure and become a source of strength for your brothers here.

Peter: Lord, what are You talking about? I’m going all the way to the end with You—to prison, to execution—I’m prepared to do anything for You.

Jesus: No, Peter, the truth is that before the rooster crows at dawn, you will have denied that you even know Me, not just once, but three times. Remember when I sent you out with no money, no pack, not even sandals? Did you lack anything?

Disciples: Not a thing.

Jesus: It’s different now. If you have some savings, take them with you. If you have a pack, fill it and bring it. If you don’t have a sword, sell your coat and buy one. Here’s the truth: what the Hebrew Scriptures said, “And He was taken as one of the criminals,” must come to fruition in Me. These words must come true.

There is powerful consistency in Jesus’ life. Again and again, He withdraws from the crowds to pray in solitude. Now, at this dramatic moment, Jesus again withdraws to pray—in a solitude made more intense by the fact that He has asked His disciples to pray, too, but they have fallen asleep.

And in this moment of anguished emotion, Jesus mouths a prayer that resonates with His consistent message of the Kingdom. He has taught His disciples to pray, “May Your kingdom come,” which is a request for God’s will to be done on earth as it is in heaven. Now, drenched in sweat, Jesus Himself prays simply for God’s will to be done, even if it means He must drink the cup of suffering that awaits Him in the hours ahead.

We often speak of having faith in Jesus; but we seldom speak of the faith of Jesus, a faith He demonstrated consistently throughout His life and especially at its end. In a moment of agony, Jesus still trusted God, still yielded His will to God, and still approached God as “Father,” placing Himself in the position of a child, in trust—profound, tested, sincere.

Once again He left the city as He had been doing during recent days, returning to Mount Olivet along with His disciples. And He came to a certain place.

Jesus: Pray for yourselves, that you will not sink into temptation.

He distanced Himself from them about a stone’s throw and knelt there, praying.

Jesus: Father, if You are willing, take this cup away from Me. Yet not My will, but Your will, be done.

[Then a messenger from heaven appeared to strengthen Him. And in His anguish, He prayed even more intensely, and His sweat was like drops of blood falling to the ground.] When He rose from prayer and returned to the disciples, He found them asleep, weighed down with sorrow. He roused them.

Jesus: Why are you sleeping? Wake up and pray that you will not sink into temptation. (Luke 22:39-46)

Latest Stories in What was happening to Christ #AtThisTime