Sharon Jaynes tells how Christ changed her life through a neighbor. 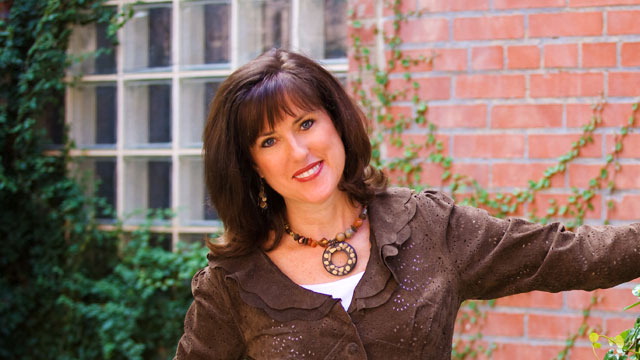 I grew up in a beautiful neighborhood in eastern North Carolina. Towering pine trees formed a shady canopy over our ranch home, and a bouquet of pastel azaleas surrounded the perimeter in the spring. With two kids and a dog named Lassie, we looked like a typical American family.

But there was an ugly secret behind the beautiful door of our home.

My father was a businessman who spent little time at home. When he was home, he drank heavily, and my parents fought both verbally and physically with their terrified children looking on.

I remember many nights going to bed, pulling the covers up over my head, and praying that I could hurry and go to sleep to shut out the noises of my parents fighting in the next room.

I often woke up to broken furniture, black eyes, and cries from a dad promising it would never happen again, but it did.

But God didn’t leave me that way.

When I was 12 years old, I started spending a lot of time at a neighbor’s home. Mrs. Henderson was the mother of my friend, Wanda, and she took me under her wing. She knew what was going on in my home, and she knew about my broken heart.

Mr. and Mrs. Henderson had a great marriage. They hugged and kissed each other in front of us and had little pet names for each other. For the first time I saw what a relationship between husband and wife could be like.

And while I didn’t understand all the reasons that their home was so full of love and so strikingly different from my own, I knew it had something to do with Jesus.

Mrs. Henderson loved Jesus and quite honestly, I thought it was odd that she talked to and about Jesus like she knew him personally! My family went to church on Sunday and when people asked, “How are you today?” we would answer “Fine, just fine.” However, we were anything but fine.

Eventually, I began going to church with the Hendersons and began to see that there is a big difference between having a religion in one’s life and having a relationship with Jesus. I was drawn to the love and joy I saw in their lives.

I finally understood that being a Christian was not about “being good enough.” We all come into this world as sinners separated from God. I understood that Jesus was God’s gift, and He was good enough for me. He died in my place, gave His life as a sacrifice, so that I could be reconciled to God and have eternal life.

That night, I said “yes” to God and gave my life to Christ.

But I still had to live in the environment that caused me so much pain.

My group of Christian friends prayed that God would intervene and save my family. More than anything, I wanted my parents to know Jesus Christ as Savior and to love each other as God intended.

Three years later I had the opportunity to study abroad in France for the summer. I wondered, If I go, who will take care of my parents? Who will break up the fights? But, I felt a strong leading from God that I should go. I told my mother, “If anything happens while I’m gone, I will not be here to help you. You need to go to Mrs. Henderson’s house.”

The very first night that I was gone, my dad came home drunk and enraged. As the arguing escalated, my mother remembered what I had said, and ran to Mrs. Henderson’s house two blocks away.

After many hours of talking with Mrs. Henderson and praying, my mother gave her life to Jesus. She returned home to my father and told him what had happened. She told him that she loved him and was choosing to forgive him.

Though my dad never drank again, he felt he had done too many horrible things in his life to ever become a Christian. He felt that he had crossed the line too many times to be forgiven.

Three years later, my father had a business deal that fell apart. He was on the verge of a nervous breakdown, and drove from NC to PA to search for my mother who was at a business meeting. Unable to find her, he drove to a church and asked for help. The pastor wasn’t there, so the secretary drew a little map and sent him to a pastor that she knew who was building a church out in the country. With map in hand, dad drove to a little country church where he found a man with a hammer in his hand and Jesus in his heart.

“Please help me,” my father cried as he approached this stranger.

“Sit down and tell me what’s on your heart,” the pastor encouraged.

So sitting on a log in the rural Pennsylvania, my dad told this man everything he had ever done. Amazingly, the pastor had done many of the very same things. My dad said, "I knew if God could forgive that man, and he could be a preacher, than He could forgive me too."

My dad gave his life to Jesus that day and became one of the sweetest men I have ever known.

In six short years, God answered my prayers and gave me the family I had always longed for. And it all began with one woman in my neighborhood.

God used one woman’s contagious love for Jesus and willingness to step into a messy life to show me how to experience eternal life in heaven and abundant life here on earth. And the ripple effect of that one night when a troubled fourteen-year-old girl made a decision to follow Christ continues today.

Who will you be a Mrs. Henderson to today?

Sharon Jaynes lives in North Carolina. She is an international conference speaker, author of 17 books and popular guest on radio and television programs such as Revive our Hearts with Nancy Leigh DeMoss, FamilyLife Today with Dennis Rainey, and Focus on the Family. In her spare time, she enjoys decorating, reading by the lake and spending time with friends. To learn more about Sharon ministry and resources, visit www.sharonjaynes.com.

Something Was Missing - How My Life Changed