His passion to connect leadership development with the Battle of Gettysburg began gradually. The last course Jay taught at the Air Force Academy was an interdisciplinary course on the Civil War. Around the same time, the Turner movie Gettysburg came out. On a long planning weekend in Denver, Jay and his wife Laurie happened to attend the movie.

“After the movie, I remember just sitting there spellbound by the story of Gettysburg – amazed by what these men endured on the battlefield. I couldn’t leave the theater. Laurie and I just sat there, reading the credits.” says Jay, who now serves with Faculty Commons. “One of the credits read ‘based on a book called Killer Angels.’ I immediately found the book and read it.”

Shortly after this, Jay was at the Pentagon for meetings. After the meetings were done, he rented a car and went to the Gettysburg National Park. 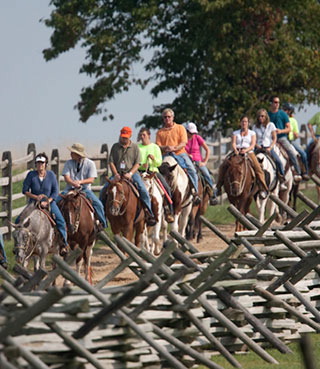 “I just drove up one day, put the musical score from the movie in a walkman and I ran around the battlefield. At every key location, I recalled scenes from the movie and the book and kept asking myself: How did these men cross this field, attack or defend this position? It had to revolve in part around leadership.”

When Jay retired, he and Laurie moved from associate staff to full-time staff with Cru Military. Assuming responsibility for leadership development within the ministry, Jay started training ministry directors within Cru Military. Eventually, the conferences expanded to associate staff, active duty military, other ministries within Cru and then to business and church and other para-church leaders.

“Last year was fun; tiring, but fun,” said Jay. “Laurie and I facilitated six If Properly Led Conferences, training over 200 leaders. In addition, I participated in the 150th Reenactment of the Battle of Gettysburg.”

Jay believes the conference works because Gettysburg provides a big story from which leadership principles can be drawn, illustrated and easily remembered.

“By walking the very battlefield terrain, we can actually see the challenges that battlefield leaders faced. As we explore those decisions, we note not only how history records their actions, but also how key biblical passages might illustrate their leadership. In a multi-dimensional environment, we wrestle with key questions: What is the critical high ground in our ministry? How can we demonstrate foresight like John Buford? How can we balance care and courage like Joshua Chamberlain? What can we learn about the language of leadership from Lincoln’s Gettysburg address?”

Although learning occurs inside the classroom and out on the battlefield, Jay and Laurie have designed the experience to be experiential: conference participants ride horses on the battlefield, climb the fences along Emmitsburg Road, march a portion of Pickett’s Charge and even fire Civil War muskets at a local firing range.

“It was really impactful to not only hear the concepts,” says Jonathan Engebretsen, a participant who lives in Wisconsin, “But see how it played out in person.”

Jay’s enthusiasm for Gettysburg and leadership development continues to grow.

“I’ve been studying the battle for 15 years and I’m still discovering leadership principles I haven’t thought about,” he says. “There is so much to learn there. And it seems to us such an ideal place to develop leaders.”