Will It All Crumble?

A trip to Greece inspires an intern to continue pursuing ministry. 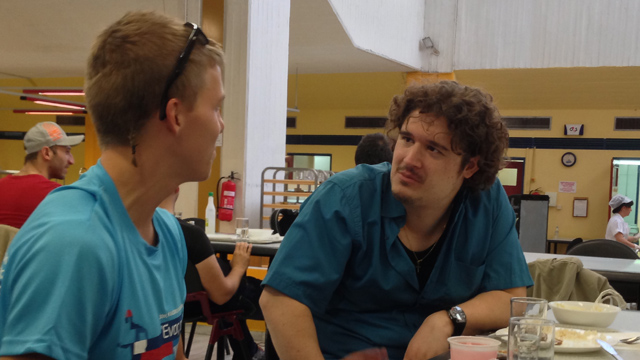 “Men of Athens, I perceive that in every way you are very religious,” the Apostle Paul wrote to the Greeks in Acts 17.

Paul spoke these words atop the Areopagus in Athens, more commonly known today as Mars Hill.

Sitting atop this rocky hill, looking over the remains of the ancient Athenian marketplace and with the ruins of the Parthenon a few hundred yards behind me, I thought about my week in Greece.

I was there learning about STINT, or “Short Term International,” a year-long assignment with Cru to introduce college students in other countries to a personal relationship with Jesus Christ.

In Greece almost everyone claims to be an Orthodox Christian because that is the country’s official religion, yet few people would say they have a relationship with Christ.

“One in 1,000 Greeks would have a faith of religion similar to what we would describe a personal relationship to Christ would be like,” said Jeff Burgess, STINT director in Athens.

Despite the need for a clear picture of the gospel, very few Greeks are open to hearing religious thoughts from non-Orthodox Christians. The STINT team in Athens works hard to build friendships with students on campus. They are hopeful that the friendships will lead to more conversations about Christ.

Three of the STINT team members; Greg Huenergardt, Chris Bostic and Ryan Taylor have all been meeting with a Greek student named Matin. All three meet with him at different times and have formed a friendship strong enough to discuss religious differences between them. They are encouraged that Matin continues to ask about their beliefs.

Another college student, Stella, previously gave her contact info to an American student on Summer Project and STINTer Katie Brown contacted her this year. Stella didn’t remember giving out her information, but she was willing to meet Katie and has since then she has become good friends with the entire team.

Learning about STINT was encouraging, but looking out on the beautiful sprawling city, I also noted that everything the ancient Greeks constructed has fallen into ruin. The Parthenon is covered in scaffolding, the theaters are closed and the marketplaces are nothing but rubble.

I was struck with a depressing feeling of inevitable destruction. The ancient Greeks constructed immaculate marble temples and I had spent all morning walking over piles of their remains. What’s the point?, I thought. Why try if everything will crumble?

Then I looked down at my Bible and the Lord comforted me with a hopeful realization. Not everything that occurred here was lost.

I had Paul’s words sitting in my lap preserved in a brown leather-bound English translation. Unlike these stone monuments, while grand during their time, the words Paul spoke on the hill in the shadow of the Parthenon are having the most impact today. Those words, along with the rest preserved in the Bible are still affecting lives far more than anything else I was seeing.

This realization gave me a new heart for the city of Athens. Paul felt it centuries ago, and the Greeks are just as in need of a savior today as they were then. I am thankful for the STINT team serving here and I pray that others will follow their lead and take up where they leave off at the end of the year.

David Dishman is currently a Cru intern at Colorado State University. He graduated from the University of Missouri with a degree in Magazine Journalism. This was his first trip to Greece.

Sotiris, 34, is a natural evangelist, seemingly fearless, with a spirit of adventure and curiosity. Katerina, 33, is much quieter than her husband. She shrieks during fireworks, runs from bees, and fears the stray dogs wandering all over Thessaloniki. But Katerina radiates remarkable confidence while talking to students about Jesus.