A countdown ticks on a screen in the front of a dark auditorium.

Tension-building music blasts slowly at first, then speeds up. Before the performer appears, his voice bellows through the speakers:

“And now that we’re all feeling in sync and you realize this is exactly where you’re supposed to be, I want you to know we’re going to have a lot of fun here. Welcome back to the world we like to call … The Maze.”

A man with spiked blond hair dressed all in black except for his pink tie steps out from the back of the stage. He doesn’t say a word. He raises an eyebrow as he looks at the audience. Then he steps down to the crowd of college students and points to his first volunteers.

Jim Munroe’s fast-paced performance baffles college students around the country. A new ministry of Cru, The Maze, is an illusion show with crazy tricks, like guessing the numbers on a lottery ticket and pulling a string out of his stomach, yet it also has a message that threads through them all and leads into Jim’s personal testimony.

The Maze exposes the illusions in people’s lives that distract them from the truth. Jim’s show points toward the “man behind the curtain” and authenticity behind disguises.

One of Jim’s recent destinations was a small private school in Sewanee, Tennessee. The University of the South is a Hogwarts-like campus with stone towers, rose windows and arched courtyards. Some students regularly don their graduation robes signifying their status and GPA. But beyond this beautiful, highly intelligent exterior, there is a brokenness that goes deeper.

Paul Hilliard, Cru leader at the University of Tennessee at Chattanooga and The University of the South, notices this when he shares the gospel with students on both campuses. 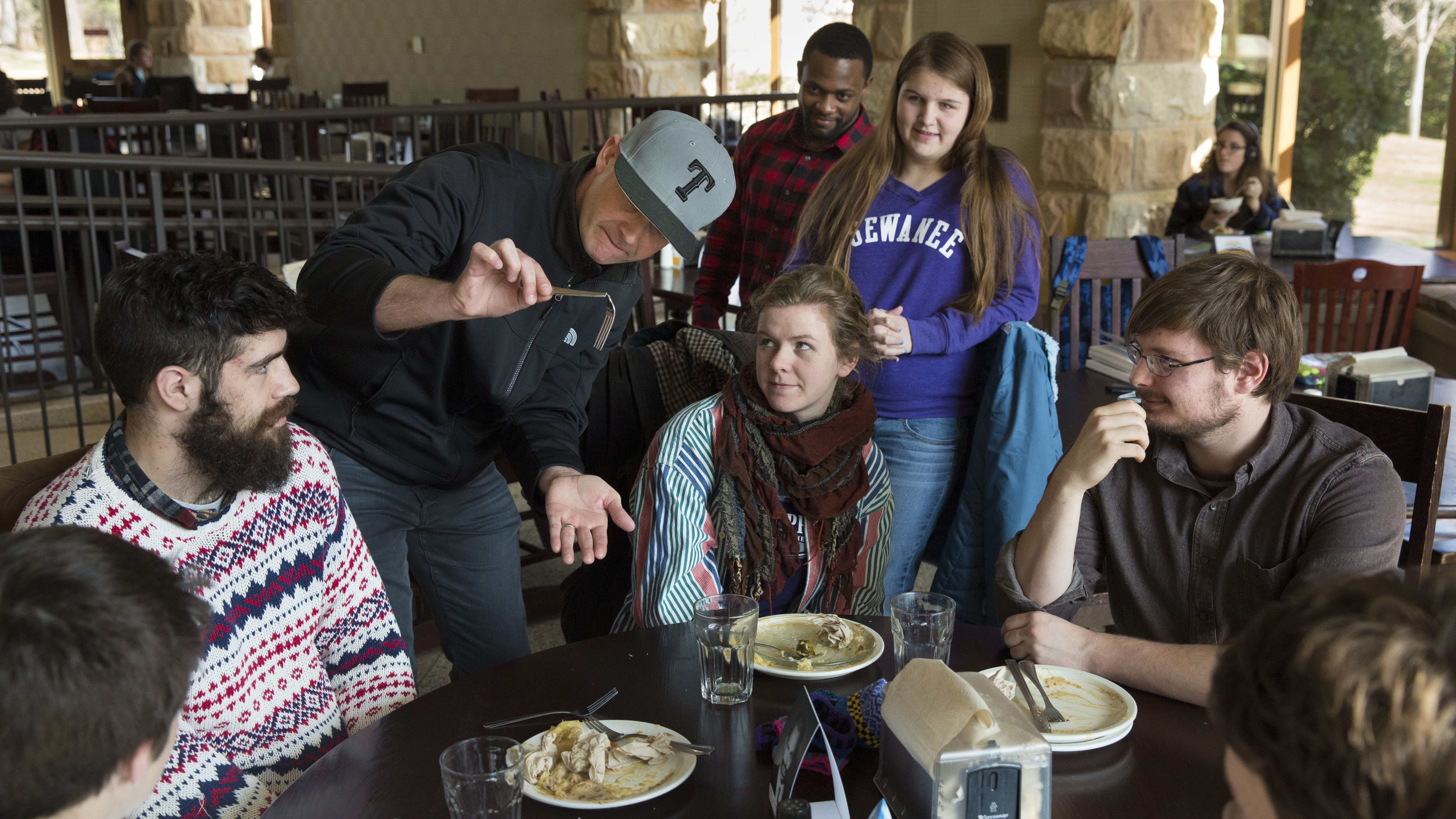 “You can just clearly see the deception that people have,” he says. “You see it here in terms of what they’re struggling with and in their inconsistent or skewed worldviews.”

Jim arrives at Sewanee the day of the show, just as the high-ceilinged cafeteria starts to buzz with the lunch crowd.

Dressed in his black casual wear, Jim approaches a group of students sitting at a round table.

Holding three forks, he asks them to choose one. With his right hand he grips the end of the chosen utensil between his thumb and index finger. With the other hand he clenches his fist below the prongs of the fork, opening and closing as he grunts. He appears to use all his strength to harness a gravitational pull. With each clench of his fist, the fork bends.

Clang! The fork snaps, and the top lands on the wooden table. The stranger has just destroyed this fork with apparently no force but his mind. He rubs his eyes as if all of his mental energy has been drawn out of him.

And instead of the expected shout, there is silence. No yells of “Oh, my gosh!” or “How did you do that?!”

The skeptical group just stares. Students involved with Cru hand out fliers to the show with no clear sign of whether these friends care. But as Jim continues his loop around the cafeteria, one student picks up the fork to inspect it. A sense of wonder begins to peek from his face.

“It puts people into a moment of questioning, which is where we want them to be,” Jim says.

This inquisitiveness drove Jim’s passion for illusion when he was a child living in Southern California. He was hooked when he saw a show at the age of 5.

“Magic to me is a big artistic chess match,” he says. “I always wanted to figure it out. It frustrated me in a good way when I couldn’t.”

Jim was a skeptic – not just of magic but of life.

He held what he describes as an agnostic, borderline atheistic worldview before he encountered Jesus at a church service that his girlfriend dragged him to in college.

After this, the journey wasn’t always a smooth one.

His best friend with whom he started The Maze died tragically in 2007. Jim’s marriage hit a hard spot. And in 2008, a doctor entered Jim’s hospital room holding a clipboard and said, “You have leukemia.”

Pictures of a man with a bald head hooked up to IVs flash on the screen as Jim tells this story to the quiet audience. The lights dim. The only flashy things left are Jim’s sparkly black sneakers.

At this point, Jim reveals what illusionists are supposed to keep hidden. The mysterious persona falls away.

Though he tells his story at each of the nearly 65 shows he performs each year, it’s not a breeze. 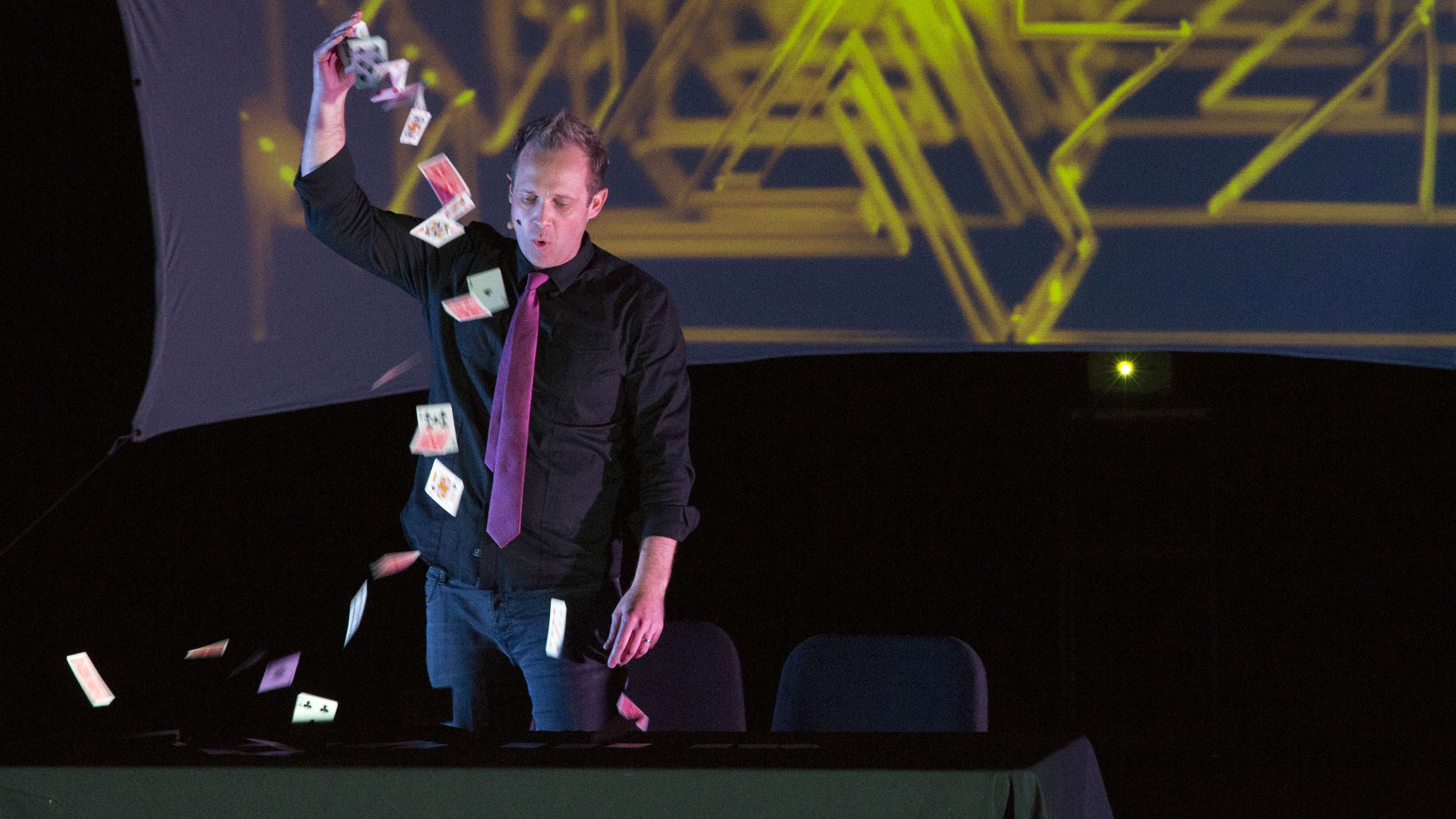 “The hardest thing to do is to stand on a stage and be real, especially with an audience that some would consider to be hostile to your worldview,” he says.

In 2009 he received a bone-marrow transplant from the one donor out of more than 9 million who was a perfect match. Her name was Jennell, which means “the grace of God.” Three days after his birthday, he received the transplant. New blood pulsed through his veins. The donor had to sacrifice so he could live.

Jim unfolds this glaring parallel to the life-giving power of the gospel.

He also uses the opportunity to encourage students to become bone marrow donors with the organization Be The Match®. Eight times a semester, representatives from Be The Match come to Jim’s shows to help students sign up.

After pacing the stage and emphasizing his story with hand gestures, Jim invites the audience to pray with him, asking Jesus to take hold of their lives.

“Every time I go out to talk to people about Jesus,” says Jim, “I pretend I’m talking to myself when I was 19 or 20 years old. A not-trusting, skeptical, broken kid. Someone who thought they had all the answers. That’s who The Maze show is geared for.”

For some students at Sewanee, it was the first time they prayed and meant it. They saw the truth behind the world’s deception. Out of the crowd, 50 indicated they received Christ, marking so on comment cards that Cru staff members can use for future discussions.

“That’s blowing my mind,” Jim responds when a staff member tells him.

The Future of the Maze

Now The Maze moves forward with more than just one man. There are always two or three other illusionists who help bring the show to life.

Back on stage, the final scene of the show begins. But this time it isn’t a trick. There’s no illusion.

Jim brings up a student volunteer who pulls out a large knife, a roll of duct tape and a red marker from a black bag. With the marker, Jim traces his hand on a wooden block. Next, he stabs the spaces between his fingers with the knife. The student secures the bag over Jim’s head with tape.

Now blind, Jim again stabs the spaces between his fingers, slowly. He pauses to slide his hand slightly away from the outline. The audience gasps. He starts again and speeds up as the knife makes a rhythmic pounding. It slows down after a few seconds and stops. Applause.

The last moments of the show are real. Just like in having a relationship with Jesus, Jim doesn’t want students to settle for anything less than what is true.