We spend several sessions discussing the “language of leadership” at our Gettysburg “ If Properly Led ” Conferences, arguing that the leader has a “palette” of words by which he paints visions in people’s minds. Our primary examples are Abraham Lincoln arguing for “new birth of freedom” at Gettysburg in 1863 and Martin Luther King, Jr arguing for “that dream of freedom still unrealized” 100 years later.

Nancy Duartel, on her  blog , analyzed MLK Jr’s “I have a dream” speech and found that the speech was “not only literarily brilliant, but its structure follows a presentation form perfectly.” A presentation form (as in the diagram below) traverses back and forth between what is and what could be , ending in MLK’s speech with an description of the new bliss of equality. 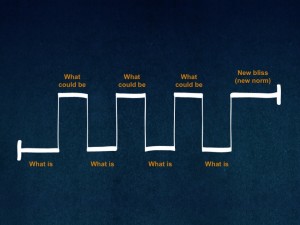 On my personal blog  I commented on Lincoln’s similar eschatological flow:

Lincoln’s leadership (as well as his speeches) seemed structured by an historical/existential/eschatological flow. In other words, he led from a sense of "what was right and wrong" about the past, and from "what could be true in the future" - while retaining an unrelenting commitment to "act in the present."

For example, here’s what I trying out:

Today there are over 1600 community colleges where 60% of all colleges students in the US begin their college education. Right now, there are very few “transformational” movements on these 2 year campuses. The rapid turnover of students is most often blamed. What if, however, we tapped into the natural leadership potential and student orientation of the faculty teaching at these schools? What would happen if we found and encouraged faculty at these CCs to become missional team leaders? It’s happening already. Take a look at  facebook.com/cru@communitycolleges .

Nancy Duarte, also analyzed MLK Jr’s “I have a dream” speech in terms of rhetorical devices, coloring each block of text between the crests and peaks of “what is and what could be.” She color-coded the blocks of text to highlight these rhetorical devices: blue stands for repetition; pink for metaphors; orange for political references and green for familiar literature and songs, from Scripture to “America.” 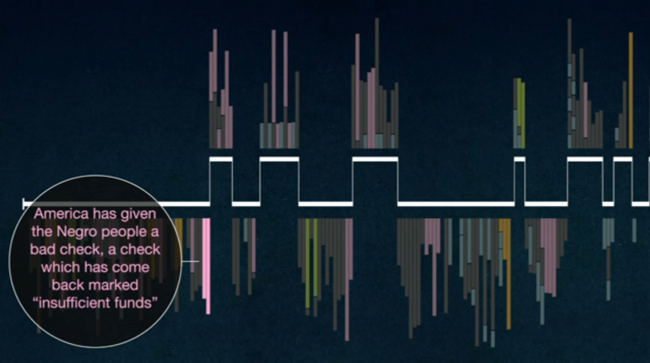 You can see that there’s lots of blue and green here, especially at the end as he is riffing on “America.” But what’s really fascinating is how much pink you’ve got everywhere. We know that MLK was an expert at using words as a paintbrush…but seeing this speech in graphic form, you can see how often he resorted to “visual language” to hammer home his point. Leaders, in other words, when they speak, they “think pink” — metaphorically speaking.

As we discussed at Gettysburg, Aristotle once reminded us: “the greatest thing of all is to be master of metaphor.”

PrEFACE: Let's Do This!