I could tell it to you in my sleep: my “three minute testimony.” The story of how I “prayed the prayer” at age five in my parents’ bedroom after a nightmare about hell.

I’ve written it on two dozen different notecards and carried it with me on several missions trips. I hoped that I wouldn’t be asked to share it in front of a crowd – not because I was ashamed of the Gospel, but because the story felt so disconnected from the life I was living.

They said, “Your testimony is just as exciting as someone who’s been to jail! Who’s been on drugs! Who’s been redeemed from the unimaginable!!” And I believed them in theory…but in reality… well, let’s just say that I hoped I wouldn’t be asked to share.

High school ended, and I stopped going on missions trips. I went to Bible College and learned all the “Right Answers.” And then I went through my own dark struggle, and the platitudes I’d always believed could no longer hold the weight of my pain and doubt.

In those days, loneliness was a hole, and I fell deep inside of it and lived, for a few years, out of the depths of my pain and brokenness. I won’t tell you the whole story here (although you can read it in my book.)

I’ve been redefining my faith. Bit by bit. Concept by concept. Platitude by platitude.

Because there is something to it – this being able to tell the story of your faith in a clear, engaging manner. But I think that the way we’ve been doing it is wrong. We’ve made it a formula – a one-size fits all. And so often, it’s just not.

Maybe your experience fits the mold – Before and After – a true “conversion” narrative. But maybe not. Maybe Christianity was a cozy, oversized sweater your parents put on you when you were a little kid, and one day, it just fit. Maybe you remember “The Moment” when you found God, but maybe you don’t. Maybe it was like a gradual waking for you, and you can’t remember when you actually understood it. Only that you finally did.

If your story feels boring and formulaic and uncomfortable, maybe you’re starting at the wrong part. Forget the formula. Go to the place where it felt the most real. Where you understood that God was bigger than you ever knew.

Go to the pain, go to the brokenness, go to wherever it all felt like too much, like more than you could handle and start there. Pick up the thread and find that moment when you realized that the reality of the Incarnation – Jesus here, with us – meant something true and relevant for you.

Maybe it’s not the moment that you prayed “The Prayer.” But maybe you prayed some prayer. Some desperate plea for God. Maybe in the asking, you found yourself caught all over again by Love.

That first moment matters…whenever it happened for you. But really, it’s just part of the story. You don’t have one unchanging testimony, friend. If you’ve known God’s grace for any amount of time, you probably have a hundred thousand of them. A million moments where God has met you in small and big ways, and each of these matters just as much as that first one.

For the most part, I’ve found that people are far less interested in how I found Jesus at age five than in how He’s finding me now.

The sun is rising. It’s a new day. The old, true words remind us that, in the end, this is really not about us at all: “We have seen and testify that the Father sent his Son to be the Savior of the world.” (1 John 4:4)

First, we have to choose to see Him. Then we can testify...not about one perfect moment, but rather out of the messy truth of our everyday lives. We point to the one whose grace is wild like a river, whose love is deep as the sea. 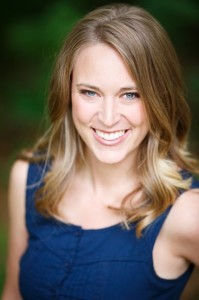 Addie Zierman is a writer, blogger and recovering Jesus freak. Her first book, When We Were on Fire:  A Memoir of Consuming Faith, Tangled Love and Starting Over releases October 15. (You can pre-order it here.) Addie blogs regularly at addiezierman.com , where she’s working to redefine her faith one cliché at a time. She lives in Minneapolis with her husband, Andrew, and their two young sons.

How to Make Your Movement More Attractive to New People

When viewed through the lens of the gospel, Lent can be a wonderful time of reflection, repentance, and intimacy with the Lord.

Lifelines: Changing Lives in the Outdoors