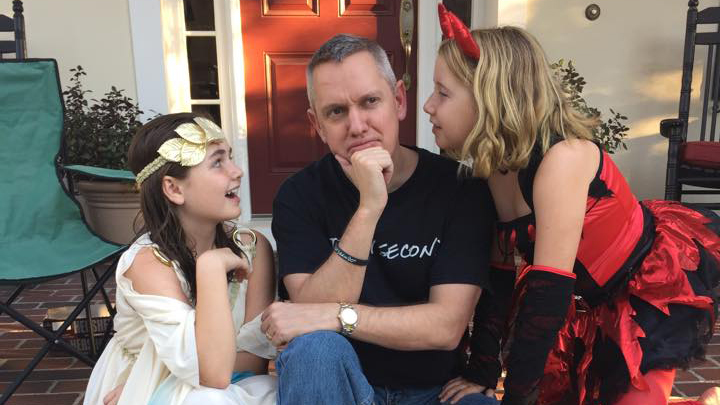 When John Crossman’s daughters began asking him if Halloween was the “devil’s night,” John instinctively said “no.”

While Halloween is a dubious holiday in which people seem to celebrate all the wrong things, John, along with many Christians, see an evangelistic opportunity instead.

“On Halloween, your neighbors are coming to you,” says John. “I think it’s an opportunity to show them the love of Christ, not turn off your lights and hide.”

John wanted his house to be fun, a place where neighbors feel comfortable and know his family as a resource.

So 8 years ago he began buying full size candy bars for the kids, water bottles for the parents, and a deck of cards with a brief gospel outline.

Living in Orlando, John was inspired to add water when he saw the mothers walking around sweating. He saves the water for later in the night, when parents are likely to have stolen a little candy out of their children’s bags.

On his porch, John makes an effort to talk and engage neighbors, having friends and family join him.

Each year John’s asked local churches if he can hand out info about their services. Sadly he’s been met with resistance in the form of “no” or lack of interest.

“We are called to be a light in the darkness,” John urges, “I have seen 14-year-old girls wearing completely inappropriate outfits. I have seen 4-year-boys dressed as demons. One thought process is to just ignore it, but my thought process is ‘No, let’s lean in, let’s be kind, let’s be loving and maybe that’s the only Jesus these people see’.”

“If [Halloween] gives us a reason to love people that’s a good thing, that’s all,” says John.

Besides this, John says he’ll never stop giving out chocolate, which is a very good thing.

Here are some ways you can adopt the holiday:

What other ideas do you have for using Halloween as an outreach opportunity? Comment below!

This Halloween, Turn the Lights On