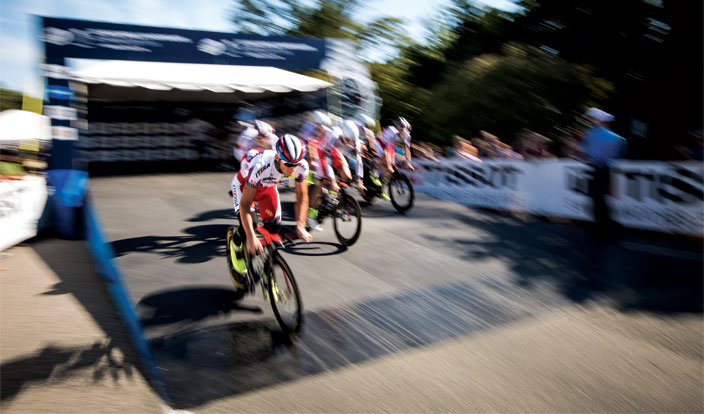 BLOOD SEEPED INTO ASPHALT. The hairpin had no warning. At 45 miles per hour, Todd saw the turn too late, slid across his lane, and slammed into an oncoming Ford Explorer. Now he lay with 12 fractures in his spine, waiting to die.

This is the perilous world of professional road cycling. For nearly two centuries, people have been enamored with the bicycle. This elegant machine converts 90 percent of a rider’s legs’ kinetic energy into motion. As any kid will attest, a bike begs to be raced.

Todd began racing at age 12. That was also the year he prayed and trusted Christ. At his age he had no way of knowing that such a wonderful sport could also dehumanize an individual.

Professional cyclists train for hours on end in all sorts of conditions, focusing on turning their bodies into machines to win races. The pressures of this cyclical, isolated life have led many racers to gain an edge illegally. Cue Lance Armstrong.

By age 19 Todd ranked among the top five cyclists in the country and had several corporate sponsors. Yet with teammates skeptical to faith, races on Sundays and a life of travel, it was difficult to live out his faith. “The more success I experienced, the less I cared about my faith,” he says, “Over time I became more selfish and egotistical.” He didn’t know a single Christian in the sport and was suffering. At age 20, he hit the SUV.

Todd didn’t die from the multiple fractures in his spine, yet he had to relearn to walk. Nine months later, Todd began racing again.

At the 2007 U.S. National Criterium Championships, Todd couldn’t stop wrecking. In his second wreck of three, he broke his bicycle. Throwing it against a barricade, he screamed and cursed in rage.

Then Todd recognized a family just past the barricade. The father was a Christian and one of Todd’s fans. Overwhelmed with shame, Todd’s heart broke.

“I so often took my gift and threw it back in God’s face,” he says. “But God didn’t give up on me and had so much more for me.” 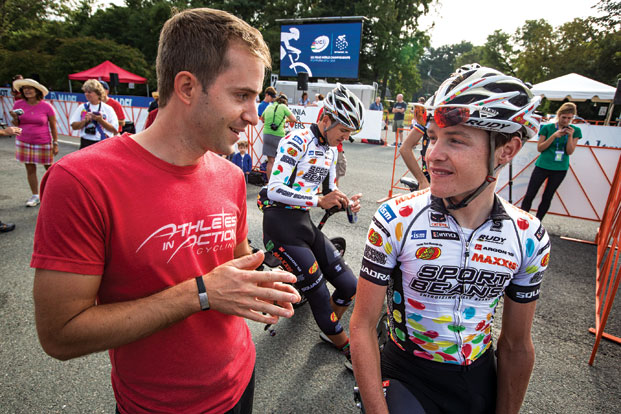 Todd (left) talks with Gavin, who joined him on a home-building project in Mexico.

Two months later, Todd prayed, as was his habit, before he re-signed a contract with his sponsors. He said it was like praying to a brick wall. Yet as he prayed this time, he clearly felt God didn’t want him to re-sign. “It became clear to me that I wasn’t the same person anymore,” says Todd, “Over time I allowed the sport to take me down a road away from God, and God was asking me to walk down another.”

With this clarity, Todd felt torn: “I couldn’t get [this decision] off my mind. It was haunting me.” With no work experience other than cycle racing, it felt like God asked him to lay down his whole world. He turned down the contract, and “bawled my eyes out.”

Todd prayed, “All right, God. I’m trying to follow You, maybe for the first time, first time in a long time, I guess. You’ve got to show up.”

Minutes later, Todd’s phone rang and a friend offered him a job at a school fundraising company called Booster, which was run by Christians. Todd took the job and was buoyed by Christian community.

Around this time, Brad with Athletes In Action, Cru’s ministry to athletes, reached out to Todd. Brad went on to mentor Todd from a distance. For four years, using Skype, they studied the Bible, and discussed life and how to reach those in the sport of cycling.

Today, Todd does what Brad did for him, mentoring and engaging professional cyclists spread throughout the U.S. and Europe. For Todd this means a lot of time on the computer, phone and social media.

He sets up online Bible studies and helps pros get involved in various ministries. He also seeks out cyclists who aren’t believers, inviting them to attend a strenuous altitude camp in Boulder, Colorado, or join with him in Hope Sports house-building projects in Rosarito, Mexico.

Todd stubbornly blows on the embers of Christian community within the cycling world.

Outside the U.S., road cycling takes on an entirely different dimension, a wild one. It might include topping the 6,273-foot peak of Mont Ventoux in the Tour de France, or descending at speeds up to 70 mph. Chad, a Texan in one of Todd’s Bible studies, recently competed in the Tour of Lombardy in Italy, a grueling 152 miles through the foothills of the Alps.

Today, the world has descended on Richmond, Virginia, for the UCI Road World Championships, which, besides the Tour de France, is one of the most anticipated races of the year.

The first day finds the start area awash with color. Men in tights with zany colors gather toward a big, black platform under a 20-square-foot awning, from which they’ll descend into a “short,” 30-mile team time trial. 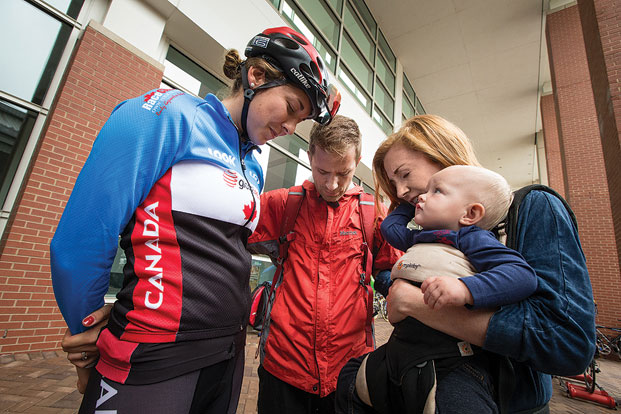 It’s only practice, not as important as the official race the next day. The riders relax and smile as an official shows them a steel girder that’s about head-high. He assures them it won’t be there tomorrow.

Todd mingles with the riders as they warm up. He’s accompanied by his wife, Tabitha, and 1-year-old Logan. Brad and his wife, Adrienne, and 3-month-old Herschel attend as well. Together they serve as AIA’s ministry to professional cyclists. All have developed relationships within the sport, yet Todd’s professional racing experience gives him extra credibility. He works to show his friends that their purpose goes beyond that of winning a race.

Freed from performance in an ultimate sense, a Christian cyclist’s identity is formed by freedom to worship as he or she trains, races and engages with others.

Todd mourns that he didn’t approach cycling this way and often forgot God’s protection over his life. He doesn’t want cyclists to forget where their gift comes from.

Ben, a Richmond local favorite and friend of Todd’s, says, “My identity as being loved by God first and as an athlete second has allowed me to deal with the pressure and disappointment that accompany a sport where you’re only as good as your last race. It has allowed me to approach cycling as an act of worship, pouring my whole self into it as in any other vocation.”

Back in the start area, Todd’s 1-year-old is enticed by the colors on Team Jelly Belly’s uniforms and the sounds of cogs clicking, and attempts to scramble under the barricade. Tabitha snags him just in time.

Brad and Todd include their families in ministry partially because they offer a tangible reminder to the pro cyclists of what matters in life. At a restaurant in Richmond, Brad’s little Herschel starts fussing. He takes Herschel, who buries his face deep in Brad’s chest and goes right to sleep. Brad remarks, “They remind you of what really matters.”

When professional cyclists’ identities are cemented in the love of a heavenly Father, it’s game on. Their tires hit the asphalt at pace. They race free and full-tilt, holding nothing back.

Help for the Hurried

Who Is My Neighbor?