In Denver, Katie's faith leads her to help others at work. 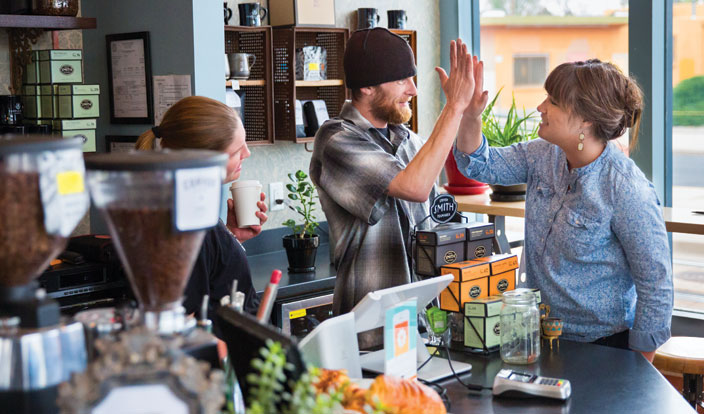 Materialistic. Lazy. Entitled. Selfie-taking narcissists. These are the labels often given to millennials, those born between 1981 and 1997. Katie, at 26 years old, falls in that category, but none of these words could describe her.

Katie rejects the shallow and artificial friendships her generation is known for. Desiring to point people to Jesus, she risks rejection and builds real relationships every day. Katie manages a nonprofit coffee shop on the outskirts of downtown Denver. Purple Door Coffee is a Christian-based café employing young adults struggling to overcome homelessness, helping them gain essential job skills in a context of caring relationships. Katie’s entrepreneurial spirit, an undervalued trait of millennials, helps her minister to her community through relationships formed at Purple Door Coffee and in her church.

To the steady soundtrack of acoustic tunes and the espresso machine, Katie works the bar with Ricky. After years of homelessness, he takes orders and methodically makes coffees.

Katie leaves Ricky to tend the bar so she can chat with a customer before sitting with Sateva, another employee. Together they read the next lesson in a life-skills curriculum.

“Why is credit necessary? Do you want to buy a house some day?” asks Katie.

“OK,” Sateva says, writing it down. “Do hospital bills count? Because I’ve probably got a million dollars of credit.” She puts her pencil down and hangs her head.

Katie puts her hand on Sateva’s shoulder and tells her it can be OK.

Sateva asks, “Couldn’t I just do jail time for the stuff I owe?”

“No, that’s not the answer. We can chip away at this,” Katie says.

Sateva’s been at Purple Door for three months, and sober from meth and heroin for two months. One month into her job, she used meth but called Katie right away, crying. Expecting complete honesty from her employees, Katie welcomed Sateva’s confession as a sign Sateva was beginning to trust her.

The first thing Katie wants her employees to know is that they have value as God’s creations and are worthy of love and belonging. She knows Sateva longs for trusting relationship—to know and be known—because she longs for the same thing. But relationships are costly and involve risk. 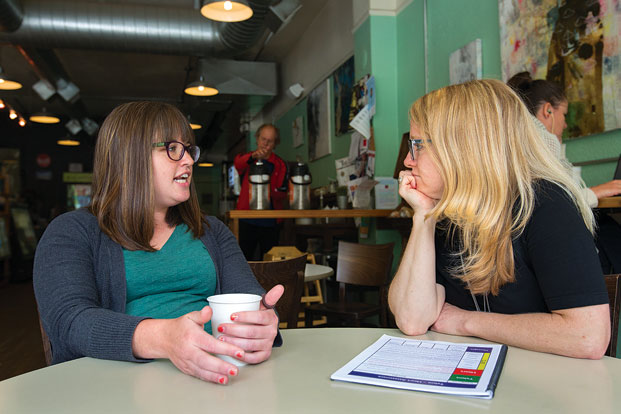 When Katie moved from Texas to Denver, she’d just broken up with her boyfriend after three years of dating. She was a new Christian without a friend in a new city. The first thing she did was look for a church.  She found Denver Community Church and introduced herself to the pastors, telling them she was new to the city and wanted involvement.

“Looking back, I think I was kind of crazy running around just saying, ‘Get me connected!’” says Katie. “I could have thrown myself into my work. I had long hours, and no one I worked with was a Christian. But I wanted it to be different.”

Finding it difficult to befriend people at church, she experienced what many in her generation do—a lack of deep fellowship. That’s one reason many millennials church-hop, failing to go deeper than a Sunday morning worship service.

“I cried out to God because I needed people,” says Katie. That night at work she had an email from Cru® staff member Bekah. “I thought, Who the heck is Bekah? I was sitting there and just started crying. I thought, God listens! And things happen.”

Katie’s pastors had asked Bekah to email her. Bekah and her husband, Chad, minister to 20-somethings in their church. They invited Katie and others to a year-long small group for millennials. They would commit to coming each week, going deeper into each other’s lives. It was just what Katie was longing for.

Nearly nine months after the small group began meeting, Katie told them and others she was looking for a better job fit, and someone mentioned Purple Door Coffee. They were looking for an accountant with a heart for ministry. It seemed like a perfect fit for Katie.

But about six months in, Katie told Bekah she felt like the directors didn’t value her opinions. She was ready to walk away. Seeing Katie’s damaged pride, Bekah said, “Huh, sounds like you’re powering up. What if you shifted your posture from being against them to being for them?”

Katie was getting a lesson in staying in a relationship when it was hard. Just a couple months later, she’d be on the other side, managing Ricky Beck.

“It took 10 months. I used to hate this job, man,” says Ricky. “I said ‘I don’t want to make these guys’ drinks, and I don’t care what they want in ‘em.’ I didn’t want to take nobody’s order. I got tired of them telling me to be nice to the customers.”

“They’ve had horrible traumatic experiences, so they’ve learned how to cope and survive,” says Katie. “Then we’re the rub that makes them think, Oh wait, this doesn’t work any more? We show them there’s another way.” 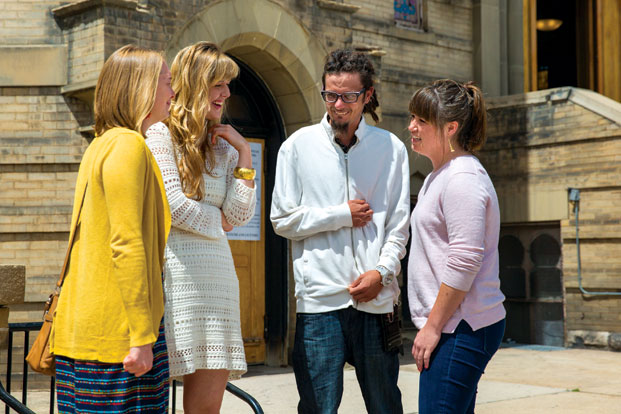 One day Ricky cussed out his probation officer and brought his anger to work, slamming things around. Katie pulled him outside, and they walked around the block. “How does cussing out your probation officer help?” Katie asked.

Fists clenched, Ricky said he hated the officer for making his life so difficult. Then turning to Katie, he said, “I hate that you’ve shown me that I’m capable of living a different way. It’s hard. It’s easier to sell drugs and get angry.”

“If you’re going to cuss someone out, cuss me out. Let me have it!” Katie told him, realizing he might quit. Katie knew she could push him and said, “Go ahead! Go back to Tennessee and sell drugs. How can I help you get there?”

“No, I’m not going to do that because I’m deserving and worthy of something more,” said Ricky.

“Did you just hear yourself?” Katie asked.

“I can’t believe I just said that!” said Ricky.

Ricky was starting to believe what Katie was teaching him. “One of the biggest struggles is helping our employees understand they have value,” says Katie. “They’ve never had anyone in their lives tell them they’re good.”

She gave Ricky the freedom to walk away from Purple Door. She risked losing someone she cared about while challenging him to believe what was true and to live up to it.

Katie invites her employees to join her at church. Ricky has been coming for about five months. “This is the church I used to sleep in front of,” says Ricky. “I’d been downstairs when they’d done the homeless feeds or something like that. The first time I came I thought, Oh, this is what it looks like upstairs.”

“The first time Ricky came to church, he saw all these people he knew from the shop,” says Katie. “For us, church is happening in our coffee shop and not just on a Sunday.”

On hard days, Katie considers giving up and doing something different—maybe going to law school—but for now she’s choosing to stay connected here.

“We can live scarcely, closed off from others and defensive,” says Katie, “or we can accept the invitation that Jesus gives to us to be open to others and loving and generous, and watch that unfold.”

She knows it’s hard. But Katie, a hopeful representative of her generation, says, “I run toward hard things.”