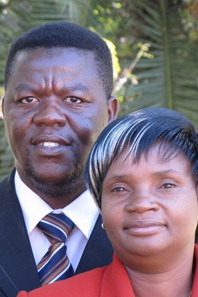 Farai and Chipo are from Zimbabwe and were married in 1993. Before joining the staff of Campus Crusade, Farai worked as an accountant and finance manager. In 2000, they attended Campus Crusade's new staff member training in Kampala, Uganda.

In 2000, Farai and Chipo attended Campus Crusade's new staff member training in Kampala, Uganda. As a staff member, Farai was director of operations and also served as a National Director.

In 2010, Farai was appointed Area Team Leader for Southern and Eastern Africa.

One of Farai's passions is to raise leaders and mentor young people. He has a personal goal to raise up leaders and equip young pastors for effectiveness in their communities. He wants to see his nation influenced with the gospel of Christ.

Farai and Chipo live in Harare, Zimbabwe, and have 3 children: Tatenda, Trinity and Trish. Chipo’s passion is to build relationships with people. She enjoys ministering to students and giving them counsel. She enjoys hosting people in the Katsande home.