Steve and Christy Sellers live in Orlando, Florida, where three of their four children also reside. In spare moments, Christy creates beauty through flowers and yard work, and they both find joy in fun times outside with their nine grandchildren.

The Making of a New President

Steve and Christy Sellers had a picture in their minds of what the future would look like for ministry. Steve has served with Cru® since 1976, leading at every level of the organization in the U.S. Most recently, he served as Executive Vice President and U.S. Director of Cru.

The couple expected to serve in new ways that didn’t include the role of president of Cru. And they thought Steve Douglass, the president of Cru at the time, would continue in his position for a few more years. 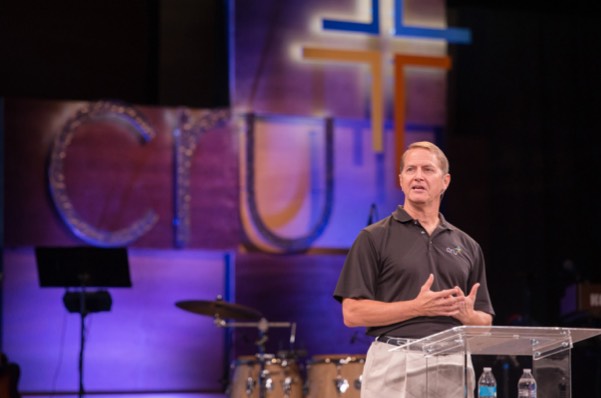 Steve addresses Cru® staff members at the biennial conference in 2013. 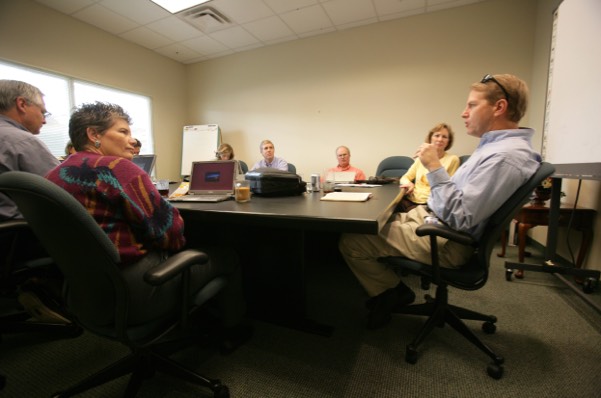 Steve meets with his executive team in the office in 2005.

Then in February 2020, Cru President Steve Douglass shared with the Board of Directors that God was leading him to step aside from his role. The announcement was made public in April 2020. Since 2001, Steve Douglass faithfully led the global ministry — calling staff members to a deeper love of Jesus, providing vision for helping to fulfill the Great Commission and guiding Cru to a greater partnership with other ministries.

Cru’s Board of Directors underwent a six-month process of extensive prayer, fasting, assessment and discussion to consider candidates who might lead the organization forward. They evaluated a variety of capable people using criteria of spiritual maturity and competency in leadership that align with Cru’s calling, among other qualities.

“In the end, [the board] sensed from God that Steve [Sellers] was best equipped to build a global team of leaders to face the realities of today and the opportunities of the future,” says Barry Cannada, the board’s chairman.

God changed the picture that Steve and Christy had in their minds about their ministry to something new.

While the World Headquarters of Cru at Lake Hart is closed due to COVID-19, Steve and Christy go to work in the spaces of their homes, both near windows that stream in light. Piles of books lie across a window seat in Christy and Steve’s bedroom, where she swivels her chair to look outside. Steve’s spot is a second-floor room, affectionately known as the “upper room” — a quiet place that has become his office.

As they glance out the windows, they look to God in the midst of steps forward. Steve entered the role of president on October 1, 2020. 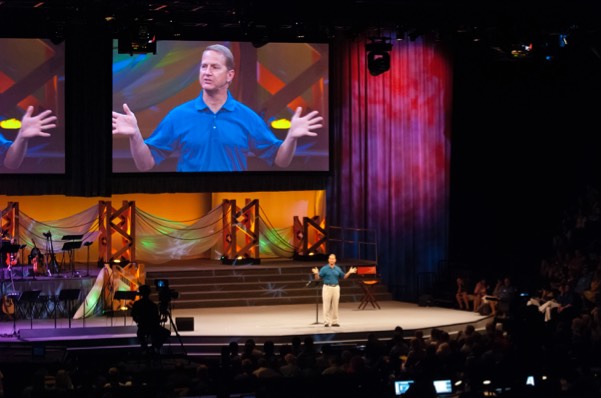 Steve speaks before a crowd at the Cru® staff conference in 2009. Steve and Christy appreciate how Cru staff members and ministry partners give their time, resources and lives as God has led them. 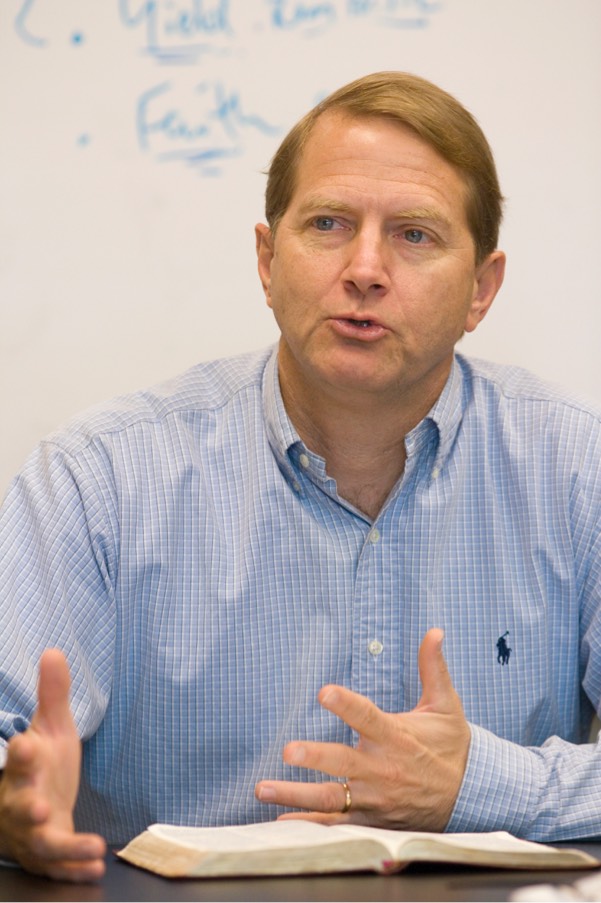 Steve talks to Cru® staff members at a leadership team devotions time and meeting. He seeks to come alongside leaders in their roles and draw out co-workers’ strengths.

Throughout their lives, Steve and Christy have seen that God brings hope in the midst of the unexpected and in suffering, as their focus redirects to Jesus.

In the middle of the night or in daily life, when unsettled moments of worry could wash over him, Steve reminds himself that God is in control. Psalm 27:13-14 refreshes his perspective: “I would have despaired unless I had believed that I would see the goodness of the Lord in the land of the living. Wait for the Lord; be strong and let your heart take courage; yes, wait for the Lord” (NASB).

“[God is] with us all the time, and He’s promised to strengthen us and provide for us ... He’s in charge,” Steve says.

From the time Steve and Christy learned that Steve Douglass was led by God to transition from being president until they heard from the Board of Directors that Steve Sellers was the one chosen to be the next president, they experienced an in-between time of waiting. Christy found solace in studying the journey of the Israelites through the desert in Exodus. God led His people for 40 years through the wilderness, sustaining them and preparing them to be His people, while they waited to reach the Promised Land. And God did the same for Steve and Christy as they walked through this unplanned season of waiting.

He gave them assurance in the next step, and as Christy says, “He is going to shape and mold [us] as His people, just as He did with the children of Israel.”

Speaking over Zoom, Christy and Steve sit shoulder to shoulder with the backdrop of the second floor and stairs in their home. With calm countenances, they reflect on pivotal times that spurred them on to growth.

When their daughter Bethany was only 19 days old, Steve and Christy picked her up out of her crib with a dangerously high fever. They rushed to the hospital. The doctors diagnosed her with meningitis, and the parents realized the hospital visit would last longer than they had anticipated.

So, as Steve drove home from the hospital to pick up essentials and make arrangements for the care of their other daughter, Emily, he pleaded with God for mercy, asking for Bethany’s healing and protection. 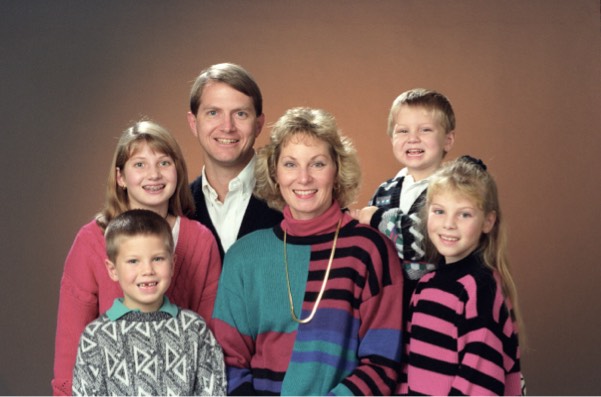 Steve and Christy’s young family poses for a photo in 1994. Emily, T.J., Jason and Bethany have since grown out of their childhood sweaters.

Then Steve sensed God speak to him, not audibly, but with an unveiled truth. God showed Steve that His love for him was like Steve’s fatherly love for Bethany as a baby. Bethany had contributed nothing to the functioning of the house; she needed constant attention and care. You understand how much you love her, and that’s how I feel about you, he perceived God telling him.

“So much of my life was focused on what I do for God. These are the things that I need to contribute. This is how important my work is.” But Steve recognized that God looks at him with the sentiment of “I love you because I created you. I love you, and you don’t have to earn that.”

Thirty-six years later, as Steve talks, the emotions of the story are still fresh. A deeper realization of God’s love allowed Steve to depend on the Holy Spirit to work through him, a truth that he first learned as a high school student involved in Cru. He now refocuses on developing, helping and caring for people rather than trying to direct them. 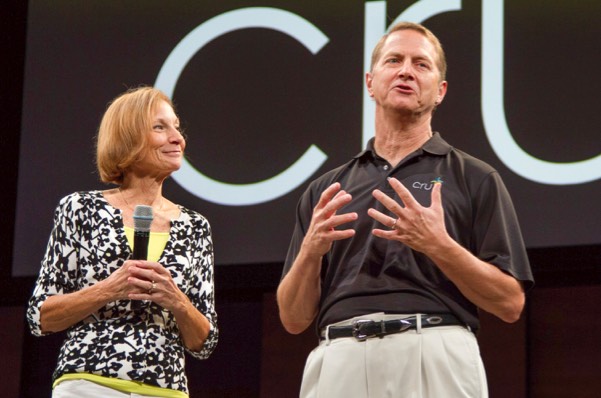 Steve and Christy join the stage at Cru®’s staff conference in 2013. Over the years, they have ministered together, whether with college students, neighbors or leaders around the world.

“She is more connected to what’s really going on and able to empathize and connect with people,” Steve says. “I’ve gotten better at that because of being around her.”

Christy’s journey has also been one of finding God’s love and hope in the midst of trials.

Not long after moving to Orlando in 1991, Christy recognized some unhealthy patterns of anxiety, sleeplessness and difficulty in adjusting to the new circumstances in her life. The young family of six had uprooted their home, and Steve took on the role of national campus director.

When diagnosed with mild depression, Christy initially rejected that diagnosis because she thought it opposed the message of living the “victorious Christian life.” But she saw a glimmer of light as she began recognizing and confronting her feelings of never being good enough.

“We rejoice in our sufferings, knowing that suffering produces endurance, and endurance produces character, and character produces hope, and hope does not put us to shame, because God’s love has been poured into our hearts through the Holy Spirit who has been given to us.”

Romans 5:3-5, verses that Steve and Christy hold on to

Little by little, God’s love permeated Christy’s life in the places where she had refused to accept the person God made her to be.

“I do minister differently because of that. I’m willing to try things and not be so afraid of what I would see as failure. I’m a better wife, mom, Granna, mother-in-law and minister of the gospel because God has reworked, refined and redeemed.”

With a focus on Christ and following His lead, Steve and Christy seek God in the task of helping to fulfill the Great Commission. Steve has become president of a nearly 70-year-old organization with a presence in more than 190 countries. A global vision doesn’t center in one part of the world, and Steve believes Cru staff members — and the whole body of Christ — around the world can find unity in a passion for the Great Commission.

“It’s being united around the calling and the cross,” Steve says.

“I think it’s also being willing to have respectful conversations with one another,” Christy says.

Steve and Christy see listening to others’ perspectives and caring to speak with others as crucial in a divisive time. Togetherness comes in loving God and each other. When the body of Christ loves one another, a light surfaces and shines on display to the world, much like what Jesus prays for us in John 17.

“We might focus on trying to convince people of something intellectually, that people can always argue about, but it’s hard to argue with love,” Steve says.

Cru® President Steve Sellers learned how to explain the gospel to others as a high school student at a Cru conference. He had no intention of sharing his faith until he saw first-hand what God could do.

During the Sellers’ commissioning service on October 1, Austin Okomohwo, area team leader for Campus Crusade for Christ in West Africa (as Cru is known there), shared via video, “The Almighty God of all creation will give you grace in abundance ... as well as strength that will not fail.”

Steve Douglass also spoke at the commissioning service. “I believe the best is yet to come,” he said.

Cru, led by Steve Sellers, will continue to move forward together with the future hope that the world will one day experience the fullness of God, and He will make all things right.

With Jesus’ words in Matthew 28 on the screen behind him, former Cru® President Steve Douglass speaks during Steve Sellers’ commissioning ceremony, passing him the baton of leading “the movement to love God” and leading Cru in the calling of helping to fulfill the Great Commission.

Steve and Christy share a light-hearted moment after the commissioning service. 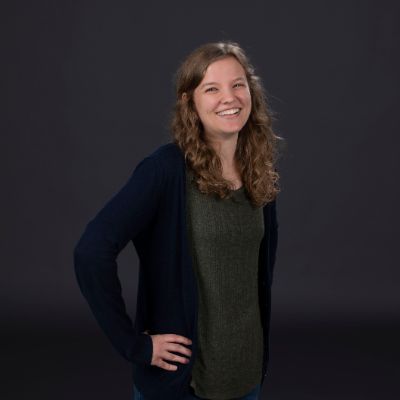 Rachel serves as a journalist with Cru®. She grew up in Minnesota, graduated from the University of Wisconsin-Eau Claire with a degree in journalism in 2014, and has since lived across the country and overseas. She loves sharing real-life stories.

Read more from the November 2020 issue 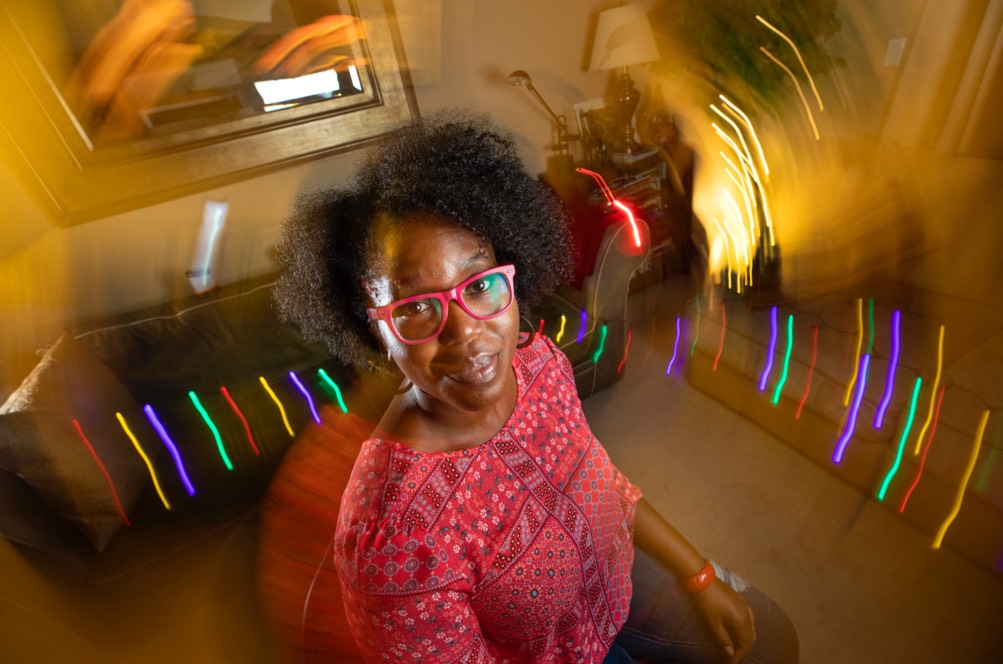 An Anchor of Hope in a Dizzying World

This Advent season, Cru Storylines™ managing editor Melody Copenny writes of how she’s reminded that hope in Jesus Christ and all He brings will never disappoint.