During a Destino® meeting, Kevin (standing, in blue) joins an icebreaker game that lends excitement to the evening.

How Does a Spiritual Movement Begin?

Tyler wanted a safe place to talk about God with other students from his music major but didn’t know where to begin. So he walked around his Georgia campus every day and prayed. He talked to his girlfriend, who is involved with Cru® at another campus. She suggested he contact The Coaching Center.

Tyler went to Cru’s website and requested information about starting a ministry. Ronnie Peirce, launching specialist with The Coaching Center, responded by email. The two decided to meet weekly via Google Hangouts for specialized coaching to help Tyler begin reaching out to his classmates.

Normally, Cru staff members can’t connect with every student on a particular campus, but with volunteers, reaching all students becomes possible. Through The Coaching Center, Cru provides support to key volunteers, like Tyler, who launch movements on high school and college campuses throughout the U.S., helping young people to know Jesus, grow in their faith and share God’s love with those around them.

The Coaching Center has more than 20 coaches nationwide available by phone or online to mobilize key volunteers — individuals who love Jesus and want to invite others to know Him. Ronnie explains that key volunteers have the same vision as Cru staff members and a desire to reach others with the gospel, just as Jesus commissions Christians to make disciples of every nation. After having conversations with potential volunteers about vision and values, Cru establishes a formal partnership with volunteers.

Ronnie calls four key volunteers weekly to ask them how they are doing and to follow up on previous conversations. She also trains the volunteers to ask questions, follow up with new Christians and utilize Cru resources, such as the Satisfied Booklet. Ronnie prays with the volunteers, and together they decide on one next step the volunteers can take to move their ministry forward. In between their weekly phone sessions, Ronnie emails to offer encouragement.

The stories below exemplify how key volunteers — including students, parents and church members — are taking the message of Jesus to young people around the U.S.

In 2017, the Cru campus staff members at the University of Arizona, Tucson, did not have the manpower and space in their already full schedules to start a Destino® movement, the Latino ministry of Cru. So they encouraged Amaris Tapia, a senior, and Kevin Gámez, a junior, to start a ministry.

“With almost 10,000 [Latino] students on campus and none being reached, we knew that we had to make a difference,” Kevin says.

Amaris and Kevin started by praying and building relationships with students in the Adalberto & Ana Guerrero Student Center. 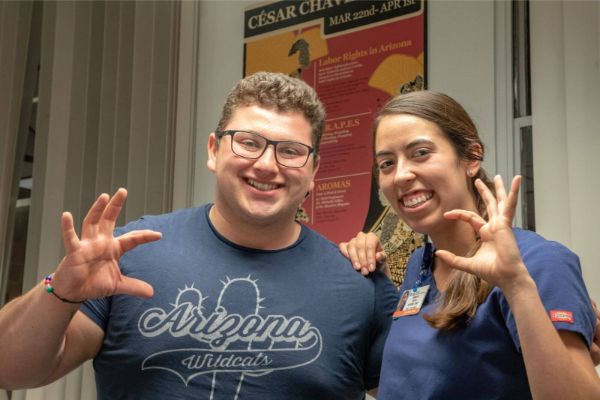 Amaris Tapia and Kevin Gámez, shown making the University of Arizona Wildcats symbol, rejoice that 25 students are involved in Destino® on their campus after two years. 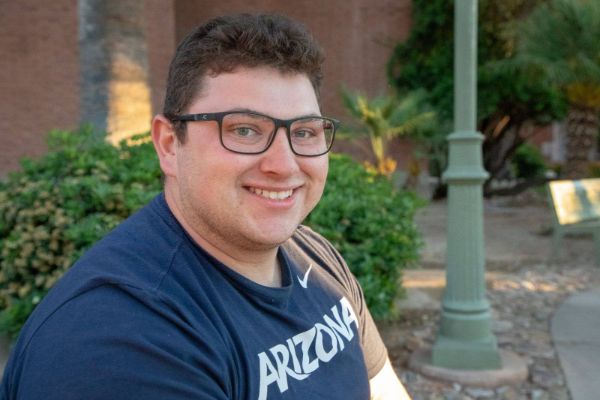 Kevin made a commitment to reach out to the Latino community on his campus. Hispanic students make up about 25% of the student body.

Later that year, at the Destino National Conference in San Diego, California, Joe Bushelman, a Destino ambassador, introduced Amaris and Kevin to Erin Brasher, a coach with The Coaching Center. “I would encourage students to take advantage of [The Coaching Center],” Joe says. “The staff there have incredible insight, wisdom and advice. It makes a difference, especially when there are not a lot of Destino staff. To have a person like Erin [available to students] — it is a life-changing experience.”

Since then, Erin has been coaching Amaris and Kevin, who have trained four new students to help lead their group of 30 that meets weekly and plans outreaches. Kevin says one of their favorite outreaches includes setting up a table outside of the Guerrero Student Center and offering a free cup of horchata (a milky drink, often made of rice, cinnamon and sugar) in exchange for a conversation and a potential contact card. 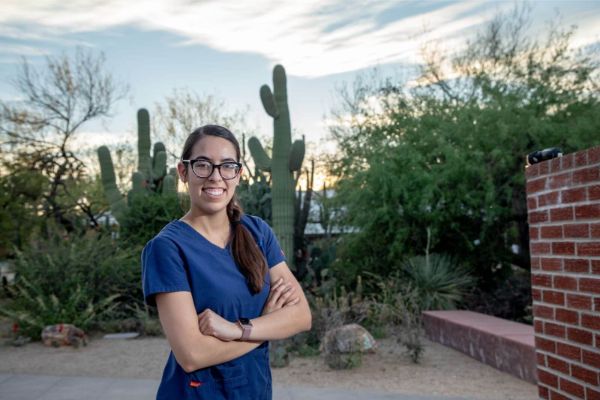 Amaris, who works at the Cancer Center in Tucson, says, “God wants to use your ethnicity to reach the kingdom.”

By sharing Christ's love with everyone, they also desire Destino to not only bless the UA students, but also to bless the entire city of Tucson. 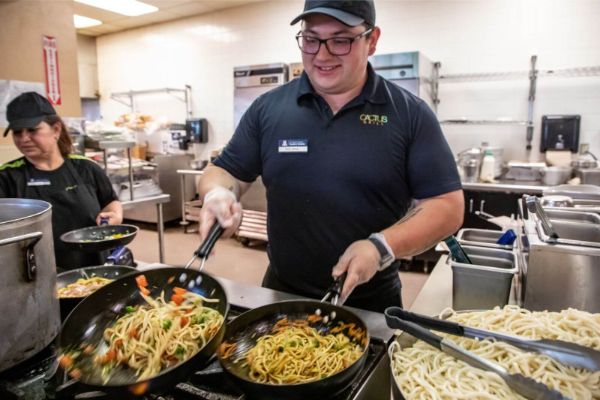 Kevin, who works as an assistant manager at Cactus Grill, says, “Our vision for Destino® is that, through Latino lenses, we can reach the entire campus with the gospel.” 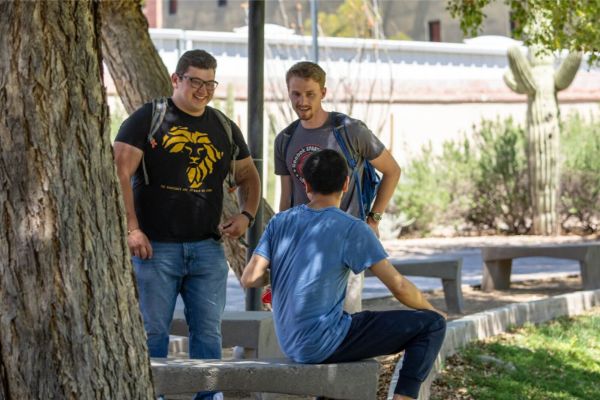 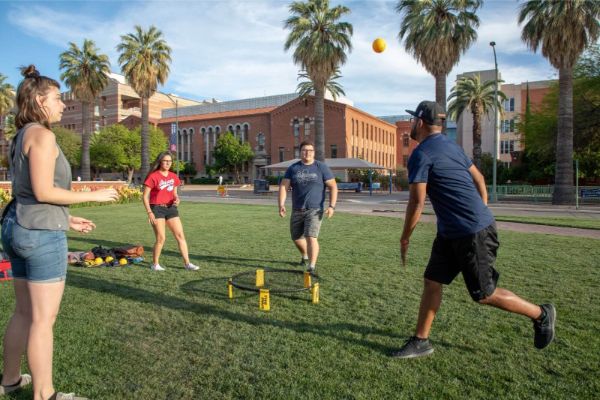 On campus, Kevin enjoys a game of Spikeball with friends. 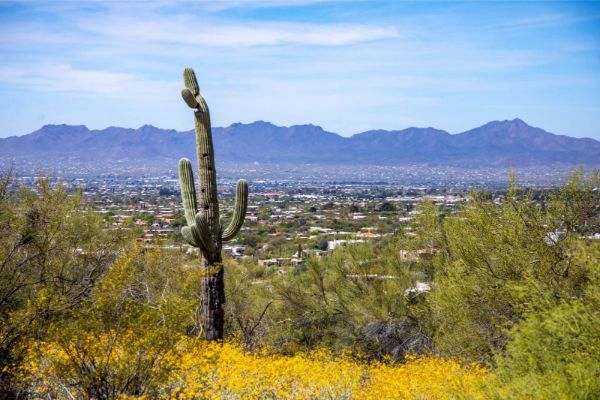 The Tucson valley population is more than 41% Hispanic.

In the spring of 2018, a co-worker approached Julie Hallgren — the children’s leader at Christ’s Church Albany and a parent of an Albany High School student — and asked her to gather parents together to start a high school outreach program. I have four kids. I could never do that, Julie thought.

But despite her hesitation, she took a step forward. Julie knew about Cru’s resources. With a vision to reach the community with the gospel and to create an outreach-focused ministry at Albany High School, Julie visited the Cru High School website and realized that Cru’s vision aligned with her church’s vision. She found the number for The Cru Coaching Center and called for information. 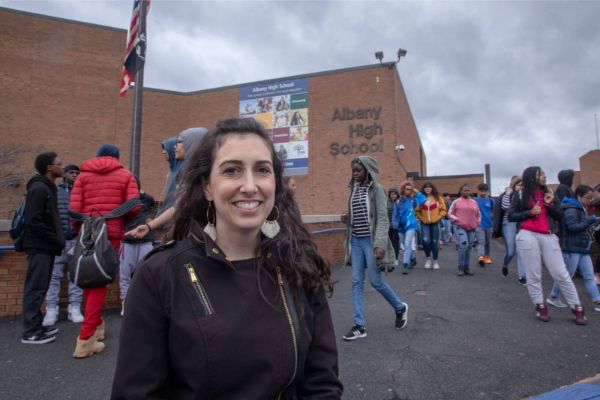 Julie Hallgren, mother of an Albany High School student, desires to see every student at the school know someone who knows Jesus. 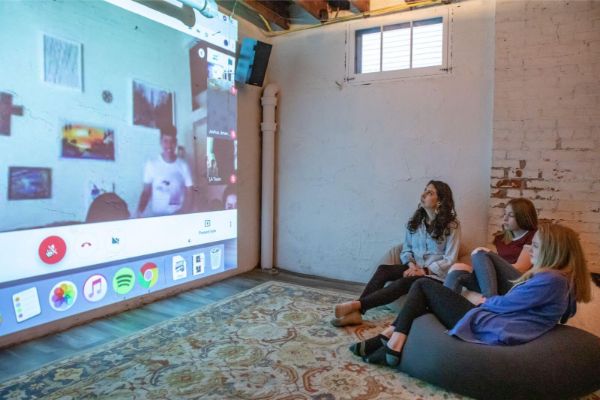 Via an online chat in Julie’s basement, Julie, her daughter and her daughter’s best friend learn how to prepare for the Cru® spring mission trip they’re planning to Puerto Rico.

Stephanie Walker, a coach with The Coaching Center, responded to Julie's call. Together they decided to have parents take a walk together and pray about reaching the high school and middle school students in Albany. They also prayed for students attending schools in the Northeast that are less accepting of the gospel, asking God to move in their communities.

In the fall, Julie launched the first in what would become a series of weekly meetings for a group of Albany high school students. Now, every Tuesday the group meets in Julie’s basement, where a large projector shows the latest training video while students lounge on the rug or couches. During spring break this year, Julie went with two of the students to Puerto Rico on a mission trip organized by Cru High School.

The 10 to 20 high schoolers who attend the meetings are from four different groups: Julie’s church, two nearby congregations, and refugee teens from the Refugee and Immigrant Support Services of Emmaus (RISSE), which functions out of a Methodist church space.

Julie wants every student in Albany to have the opportunity to know Jesus. She hopes more students will invite friends to join the group and that next fall the meetings will be located on the campus of the high school itself. 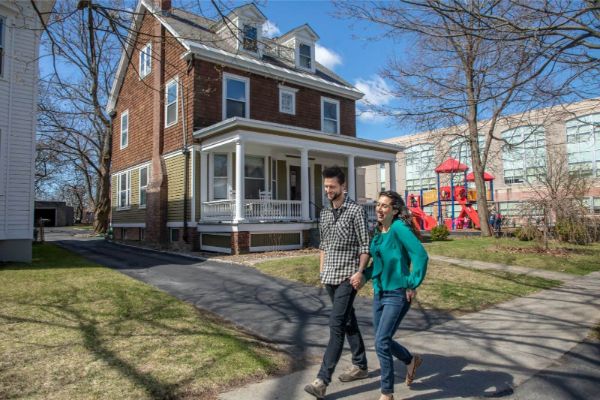 Julie and Stephen, her husband, had prayed to use their Albany home for ministry and now rejoice that this has happened. 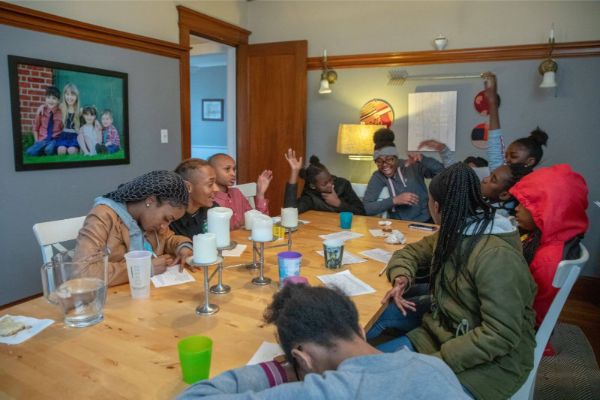 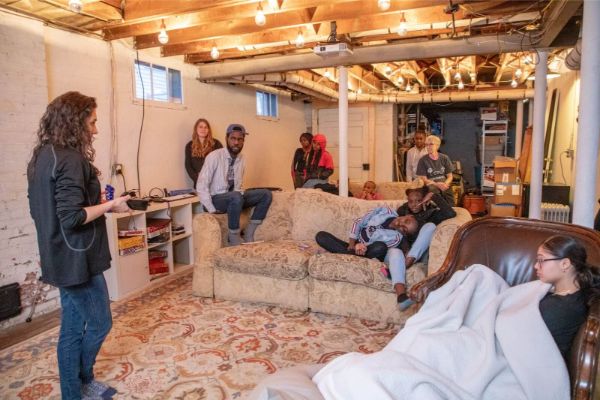 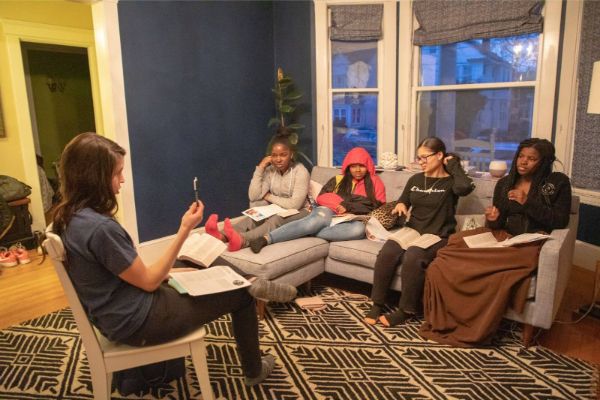 A small group discusses the Bible in Julie’s living room.

To other parents thinking of starting a movement, Julie says, “Definitely cover the idea of a movement in prayer. Keep seeking where God is leading. Don’t be afraid to take the next step. Be open.” Julie appreciates that Stephanie from The Coaching Center prays for her consistently and checks in to see how she is doing. She also enjoys bouncing ideas off Stephanie. “It is nice to have someone to talk things through, and I know she has my back,” Julie says. 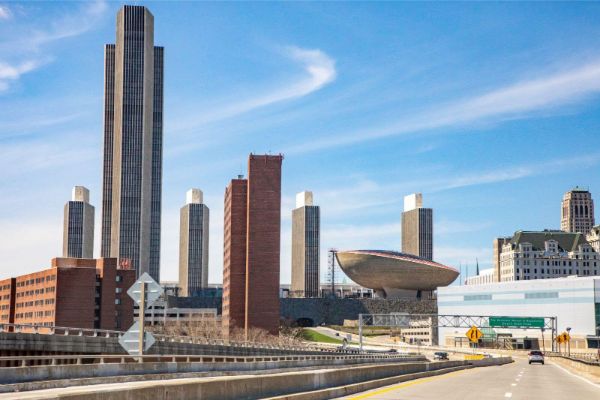 The Egg, a performing arts venue (center, above roadway), adds character to the Albany skyline and is part of the Empire State Plaza.

A church-led movement in Tennessee

In 2017, the elders of the Fellowship Bible Church in Murfreesboro, Tennessee, decided that Middle Tennessee State University, a school with no Cru® staff members, would be a great place to share the gospel. Blake Waldron, a pastoral intern leading college students at FBC, contacted The Cru Coaching Center. His father, Monte Waldron, the teaching pastor at FBC, thought it sensible to partner with Cru because he had done so in the past.

Blake sought information about events Cru organized during Christmas break. Based on the information he found, he decided to take a group of eight college students to attend a Cru Winter Conference. Afterward, Daniel Hensley of The Coaching Center followed up with him. From then on, Daniel called Blake every few weeks to hear how he was doing, to learn how he was growing spiritually and to find out the best ways to serve the MTSU group. “It is a huge help having a coach and mentor walk through how to launch a leadership team,” says Blake.

The church called the MTSU group Koin, taken from the Greek word koinonia, which means “fellowship.” The church leadership desired Koin to be a place where students could be honest, hear truth, receive grace and process life. 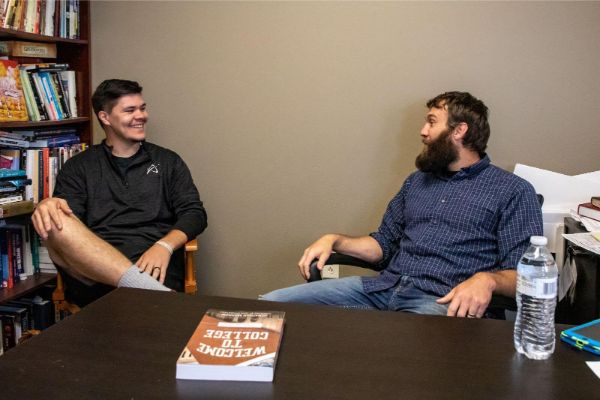 Blake Waldron and student pastor Benji Baker meet at Fellowship Bible Church. Partnering with The Cru® Coaching Center enabled them to find the resources and training to start Koin. 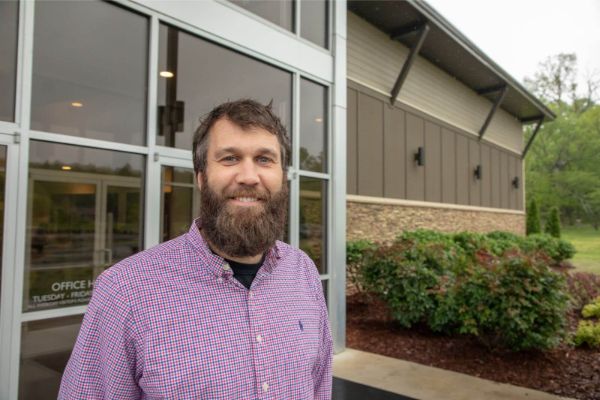 Benji Baker says of Middle Tennessee State University, “Our church sees the MTSU campus as a great place to share the gospel.”

“The vision and mission of Koin is cultivating connected followers of Christ in order to equip students to live a lifestyle of making disciples who make disciples,” says Benji Baker, student pastor of FBC, who currently oversees the group.

Koin meets at MTSU in the business building on Thursdays with 15 to 20 students attending. Four different small Bible study groups also meet on campus during the week. Benji oversees the team of students who lead large group meetings and discipleship groups. He meets with them monthly to check in, cover leadership concerns, plan out the month and pray.

For other churches wanting to start a movement, Benji says, “Pray like crazy. God will make it happen and provide what’s needed. Look at the life of Jesus and how He started a movement. And partner with [The Coaching Center to learn about] Winter Conferences and training tools. There are amazing resources. You don’t have to figure it out on your own.” 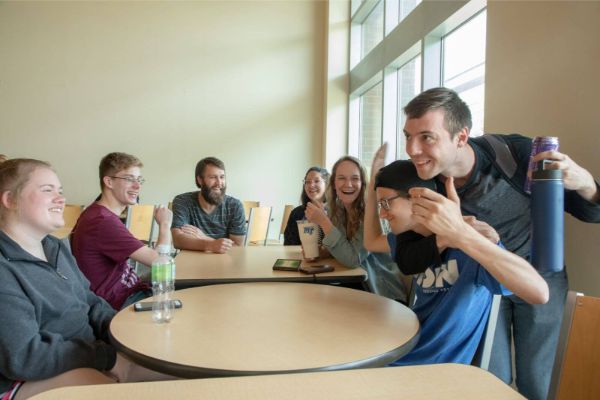 Student leaders of Koin, the campus ministry of Fellowship Bible Church, meet at lunchtime on the MTSU campus. 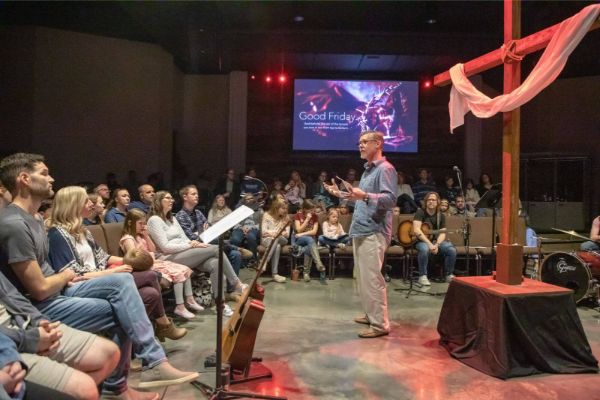 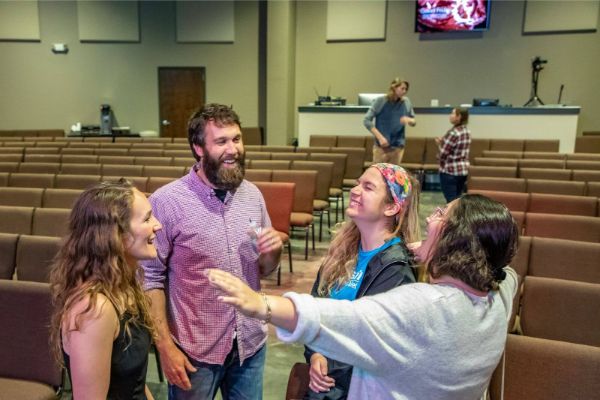 Benji talks with Koin core team members Hayden (left) and Rachel (right), along with their friend (second from right), after a church service.

How to lead a ministry near you

Interested in starting a ministry to reach young people in your area? Contact The Coaching Center here and set up a key volunteer interview to discuss your vision.

These resources can also help:

How have you started a spiritual movement in your community? 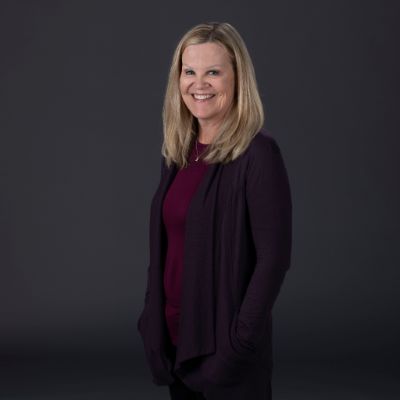 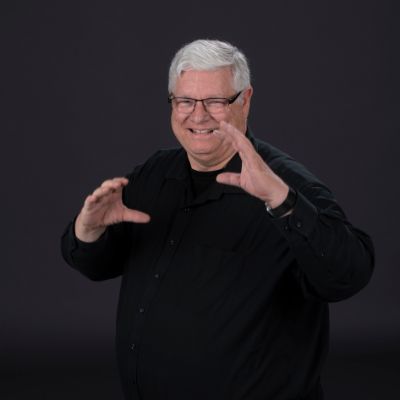 Read more from the July 2019 issue 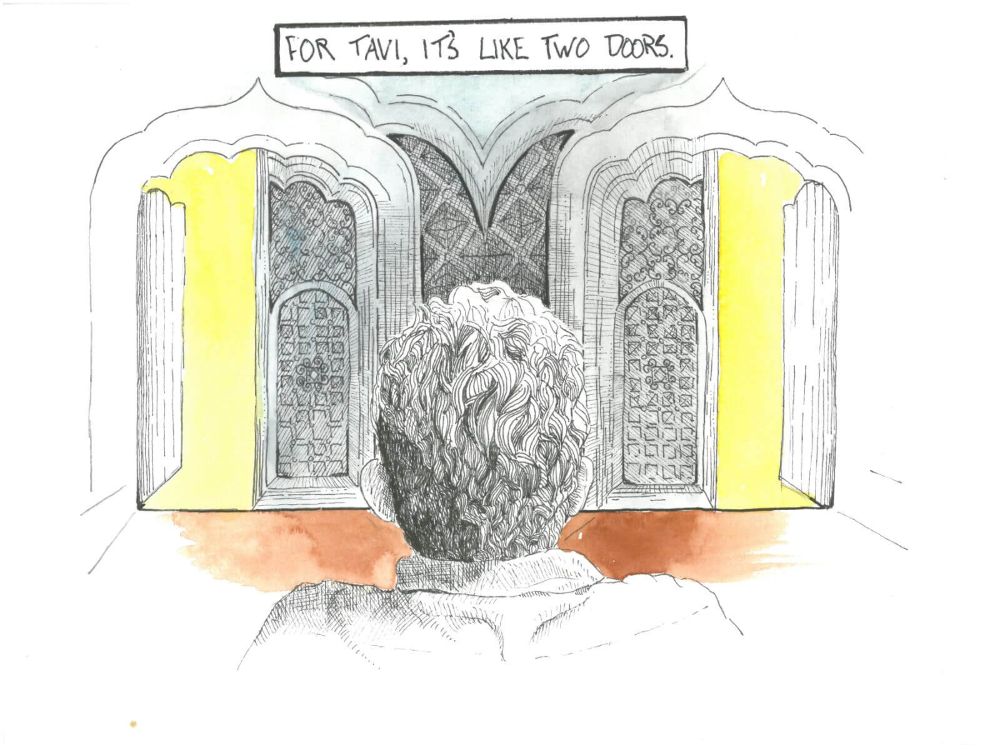 From Coffee to Christ: The Spiritual Journey of a Middle Eastern Seeker

A young Cru® intern strikes up a friendship with a college student facing a difficult choice.