A member of Cross Water Outfitters, an outdoors ministry in Central Texas, offers a fishing opportunity to international students. Fishing is a popular activity during Bridges International™ retreats in the Texas Hill Country.

A Fisherman and an International Student Board a Boat

Roger “Cowboy” Elkins took a group of international students for a boat ride. These students came from different parts of the globe to study in the United States and now found themselves in the Texas Hill Country as part of a Bridges International™ fall retreat. As Cowboy regarded his captive audience, this outgoing man felt abnormally hesitant.

How would I, a 66-year-old fisherman from Texas, relate to young international students?

Cowboy doesn’t typically shy away from an audience. His gregarious personality means that he’s often a party waiting to happen—engaged in other people’s lives and eager to tell stories from his own. But that day on the boat took him out of his comfort zone. Cowboy wanted to say something about his faith in Jesus, but he didn’t know how to begin.

“To be honest,” says Cowboy, “I was uncomfortable because I didn’t talk that much about my faith. I didn’t know what to say or what to expect.”

But he decided to try something. 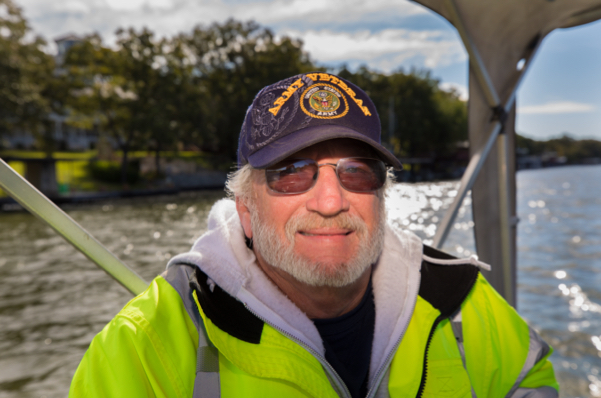 Roger “Cowboy” Elkins is eager to tell others about his stories of survival. “There’s a reason why I’m here,” he says to the students who join him on his boat.

After asking each student’s name and home nation, the retired firefighter simply said, “I’ve got a story to tell you.” Then, as his boat floated calmly on a lake in the Texas Hill Country, he told of his saga of survival and salvation.

In 2004, while fixing a broken rope on a flagpole, Cowboy fell 32 feet. This fall left him with a shattered knee and four months of unceasing pain. But that horrific experience turned out well, he said to the students in his boat. One day, he simply looked upward and said, “God, I can’t do it.” Healing came quickly—an answered prayer, Cowboy is sure—influencing his body and his soul. Cowboy established a relationship with God that continues today and returned to work one month later.

The students sat on the rocking boat, captivated. So Cowboy continued.

In 2012, doctors diagnosed him with cancer. The treatments nearly killed him several times, though he eventually regained his health. But, he told the students, in early 2016 the cancer returned.

Perhaps none of Cowboy’s 20-something listeners had ever heard a person talk about life-threatening cancer as this Texas fisherman did. “I turned it over to God,” he casually told them in his Texas twang. “I don’t worry about it. There’s a reason why I’m here. It might be to talk to you.”

Cowboy speaks with a group of international students on a boat.

After finishing their boat ride, the students moved quickly onto the dock to pursue their next activity. But one woman from East Asia lingered behind. Cowboy had previously noticed a tear in her eye, but he was not prepared for her words.

“You changed my life,” she said, simply.

Later that day, she spoke with two leaders at the retreat and asked Jesus to be her Lord and Savior.

“I was flabbergasted,” recalls Cowboy, who was still feeling unsure about whether he had effectively shared his faith. “That took me by surprise.”

A retreat for the nations

“The original vision,” says Pastor Rodney McGee, former pastor of Hill Country Fellowship, “was to reach the unreached people of the world by helping Bridges International develop relationships with students, having fun and giving them Christ.”

Scott Pollard, a veterinarian and member of Hill Country Fellowship, shows a catfish to three international students. The annual Hill Country Fall Retreat gives students a rest from their studies and a chance to encounter Christian friendship and hospitality.

Fishing is a new experience for many international students. The man and woman holding a catfish are from Malaysia; the other woman is from Indonesia.

Bridges seeks to reach international students who attend universities in the United States by hosting them, befriending them and sharing the love of Jesus with them.

Rodney and a key church member approached Bridges’ director of development, Nader Wadie, and several of his colleagues in 2015 to suggest a retreat for international students studying in Texas and nearby states.

“We just went to 54 nations!” says Rodney, who now serves with an evangelistic ministry while consulting with leaders at Hill Country Fellowship. “God let them come to the Hill Country to be with us.”

The original vision moved beyond bringing international students together for speakers, skits and s’mores. 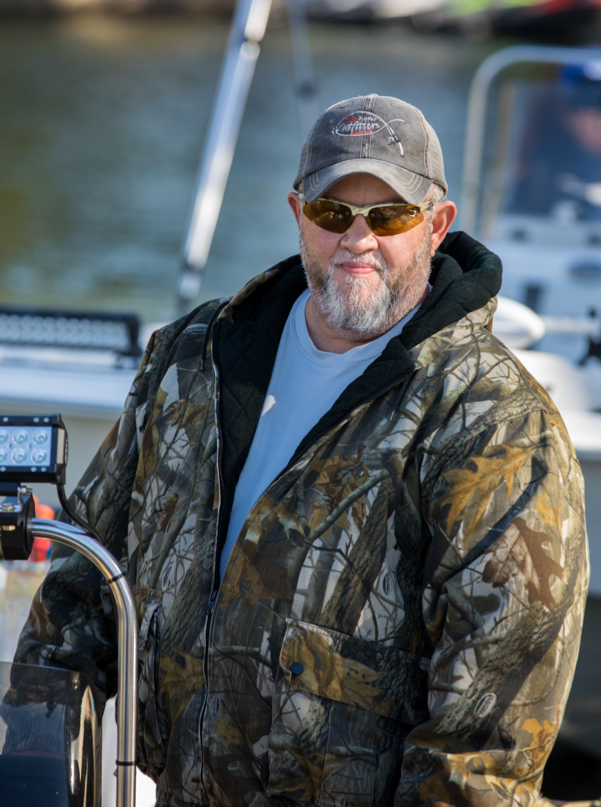 The retreat draws busy students from their campuses by offering water activities, including fishing. Rodney wanted to mobilize a navy of experienced fishermen, like those from an outdoors ministry called Cross Water Outfitters, who could use the local art of jug fishing to help international students catch catfish. One of Rodney’s church members wasn’t convinced at first.

“I was skeptical about catfishermen interacting with Ph.D. international students,” says the layman. “But it’s just like God: He uses the weak and the base and the lowly things to shame the wise. He used a bunch of redneck catfishermen, and I’m one of them, to engage these students.”

The hospitality, warmth and love from these rural Texas fishing bubbas, and volunteers from Hill Country Fellowship and Cross Water Outfitters, have influenced international students, who are often lonely and homesick.

Even on a chilly day, international students can’t pass up the chance for an exciting boat ride. 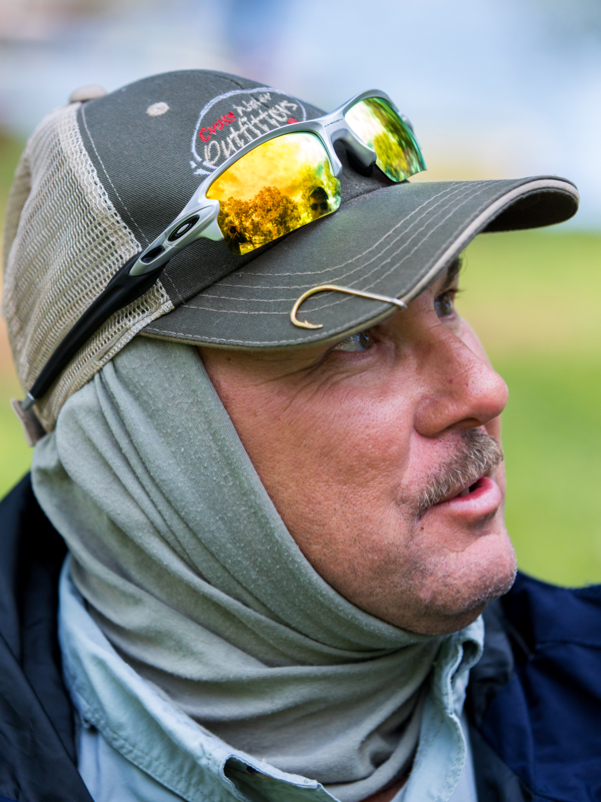 Dressed to offset the weather on a cold day, Eliot Nixon is always ready to take international students onto the water. Eliot is a member of Cross Water Outfitters, and he gave direction to the fishing activities during the fall retreat.

Although the Hill Country Fall Retreat focuses on pre-evangelism—creating new friendships and developing spiritual interest—several students indicated faith in Jesus within a week after the 2017 gathering.

“This is too good to be true.”

A graduate student from Tibet was amazed by the kindness of the American volunteers and that the weekend was virtually free. “This is too good to be true,” she said to her friend, a Bridges staff member.

“Yes,” responded the staff member, “and it’s like what we have in Christ. It’s not what you do, it’s what Christ does for you.” Not only did this student indicate faith in Jesus, but she has since immersed herself in studying the Bible and has told others about the gospel message. “It’s bubbling over within her,” says the staff member.

“Knowing about Christianity opens my mind.”

A Houston-area student from an Arab nation responded to the retreat as an extension of truth he had been receiving on campus.

“Honestly,” said Ali, “these few months, knowing about Christianity opens my mind. Reading the Bible is something that gives me the light I need.”

According to his friend with Bridges, the last gathering at the retreat proved especially significant. “We were studying Mark 2, and Ali saw that Jesus had the authority of God to forgive sins. That stood out to him.” 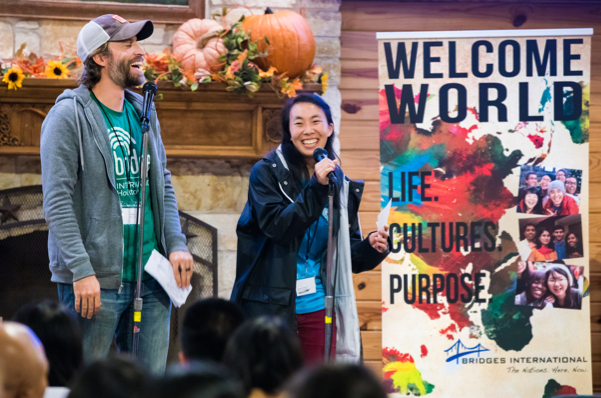 Two Bridges staff members provide humor to help international students feel comfortable at the annual retreat. Many students got their first taste of Bible teaching during the retreat. 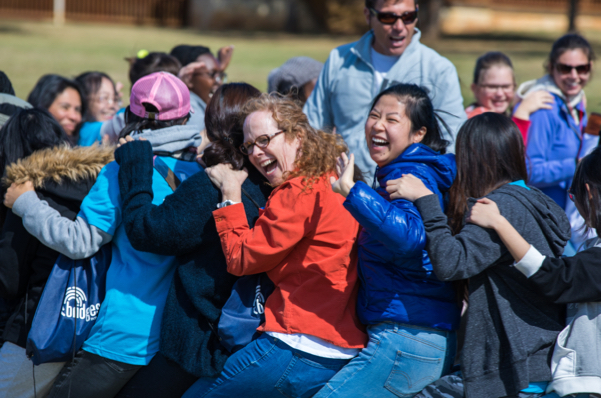 Shannon Ead, a Bridges volunteer in Austin (in red coat), participates in a group game at the retreat. Many international students experience loneliness when they first arrive in America, and the retreat helps create many new friendships.

“I know that God is our guide and He is love.”

An East Asian woman who had recently finished her graduate degree in Dallas was impressed by principles from God’s Word and by an American Christian student she met in her small group. “I met so many nice people,” she said, “like a girl from SMU [Southern Methodist University] who was very wise. I know in this world, there is something above us, higher than us. And when I read the Bible, I know that God is our guide and He is love.”

And Cowboy Elkins, though still battling cancer, finds delight in telling others about his faith. And that began through his service at the Hill Country Fall Retreat.

“I seem to be able to talk about my faith easier now than before,” says Cowboy. “I’ve got friends on Facebook from high school, and I would never have put anything out there before. But now I put it out all the time—‘I’m a Christian, this is my joy, and I hope you get the joy, too.’” 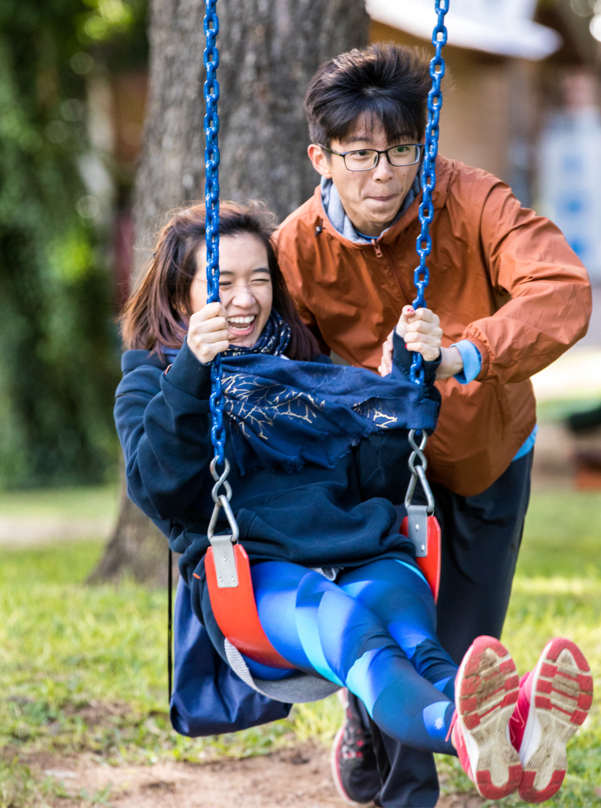 The Hill Country Fall Retreat offers a weekend reprieve from academics. Two students from the University of Texas, both from Malaysia, take advantage of an available swing.

Have you shared your faith with someone who was not from your country?

Bill Horlacher has ministered to international students for more than 30 years. He served as Bridges International™’s executive director from 1991 to 2010. Bill and his wife, Kathy, now live in his hometown of State College, Pennsylvania, where they reach out to internationals at Penn State.

Read more from the March 2018 issue 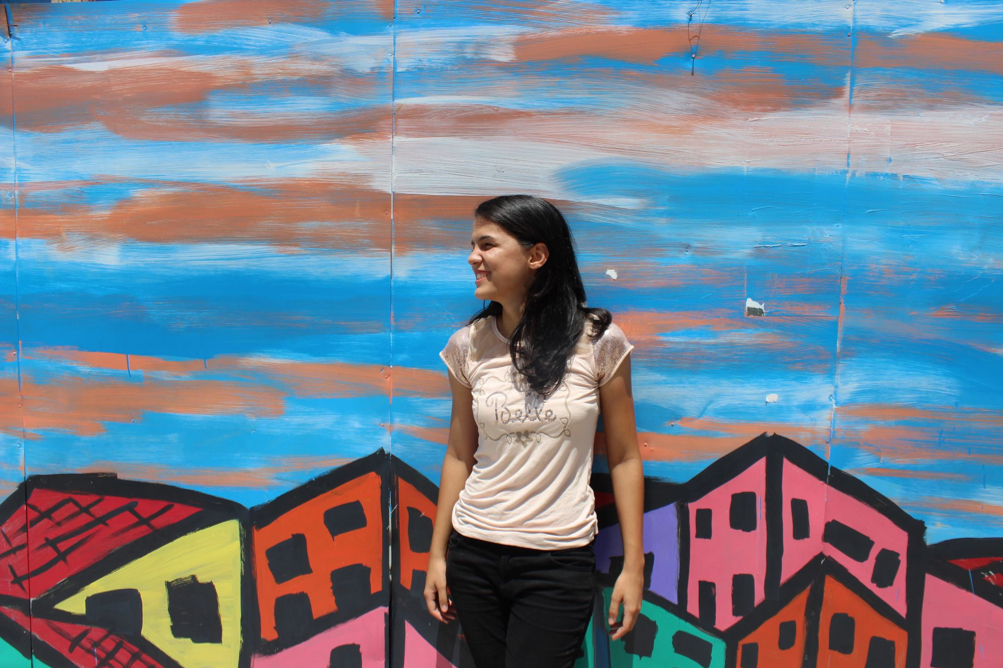 What Happens When a Brazilian Skeptic Finds Jesus

“I thought Christianity was foolishness,” says Kariny Rocha, a university student in Teresina, Brazil. Watch what happened when Jesus changed her mind.