Matt Deaton, a student at Piedmont Virginia Community College, uses a bedsheet to try to sail on the strong sea breeze. Big Break, Cru®’s annual spring break conference, is a memorable week of evangelism and fun with friends in Panama City Beach, Florida.

A Spring Break That Breaks the Norm

George Flores went to the beach hoping for one specific thing: to watch someone put his faith in Jesus.

Though he grew up as a Christian, attending Christian schools and a Christian university, George had never shared his faith until a mission trip to Puerto Rico two months prior. During the trip, he talked with people from different faith backgrounds, but he never saw anyone put his or her faith in Jesus. He wanted his experience at Big Break to be different.

George, a junior at Liberty University, spoke about his faith in Christ several times throughout the week. But by the night before the final day of outreach, his hope had yet to be realized.

He told a Cru staff member about his desire, and together they prayed that God would allow George to see someone choose to follow Jesus. 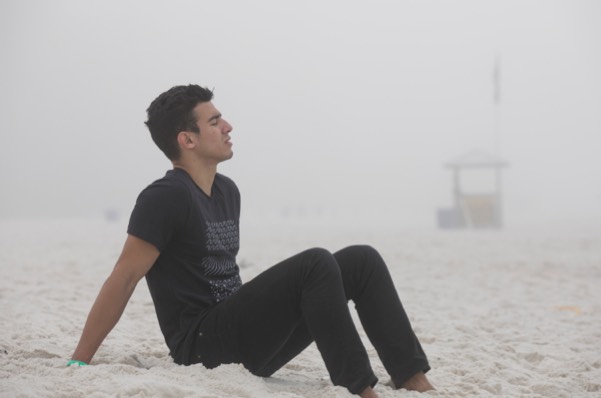 George Flores, a student at Liberty University, prays as the sun rises over the ocean. Big Break’s emphasis on evangelism often stretches students’ faith, producing a deep trust in God as they see Him work through them.

The next afternoon, George and a few friends spotted four high school students attempting backflips from a boxy storage container on the beach. Curious, and wanting to try the feat themselves, they approached and asked to join in.

After attempting the stunts and laughing with the students, George and his friends asked questions about their lives and steered the conversation toward spiritual topics.

George talked with one young man, Patrick. Patrick shared that he will join the Marines next year, and the anticipation of this intimidating step had showed him his need for peace. George told Patrick that Jesus died and rose again to offer him new life and that a relationship with Jesus brings peace and hope. Patrick acknowledged that he needed to hear those words. 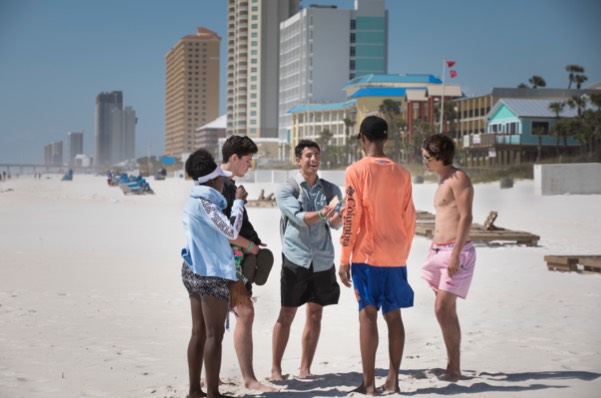 “If this is that real to you,” George said, “would you like to pray with me?”

Patrick agreed and, on the beach, prayed, expressing his desire for Jesus to enter his life.

What kind of evangelism tools do students use?

Learn more about Cru resources that help share the gospel.

What kind of evangelism tools do students use?

Snapshot Cards, created by Cru’s high school ministry, use engaging images to help people identify where they are on their spiritual journey.

This booklet is a redesigned version of the Four Spiritual Laws booklet. Would You Like to Know God Personally? has been used around the world in various forms for more than 50 years and is one of Cru’s primary means of communicating how people can enter into a personal relationship with Christ.

During the three weeks of Big Break 2018, from March 3 to March 24, students from 105 universities boldly initiated spiritual conversations with 2,837 people. As a result, 244 people indicated a decision to trust Christ. 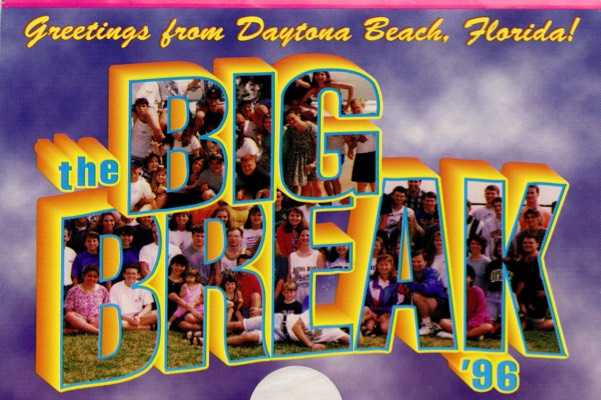 The gallery below shows more of God’s work during Big Break 2018. 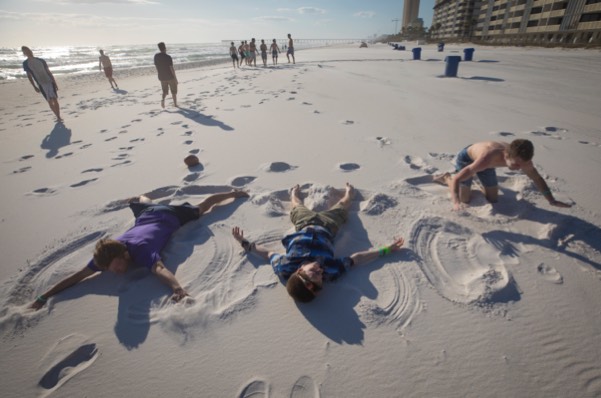 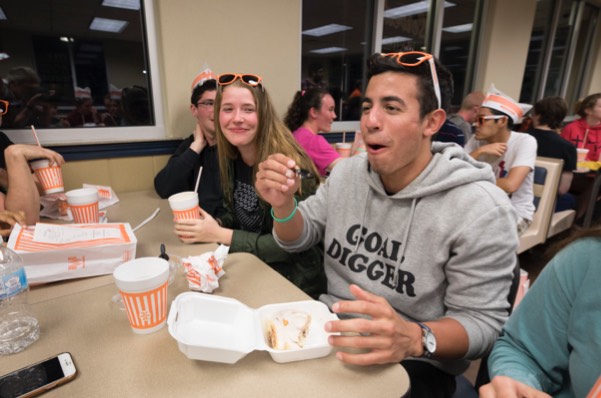 Nighttime fast food runs help the students from LU and PVCC get to know each other during the trip. 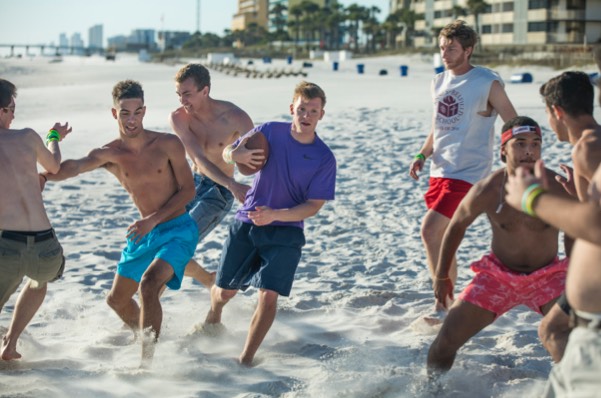 Beach football adds to the Big Break experience. Students often use sports as a way to meet others on the beach. 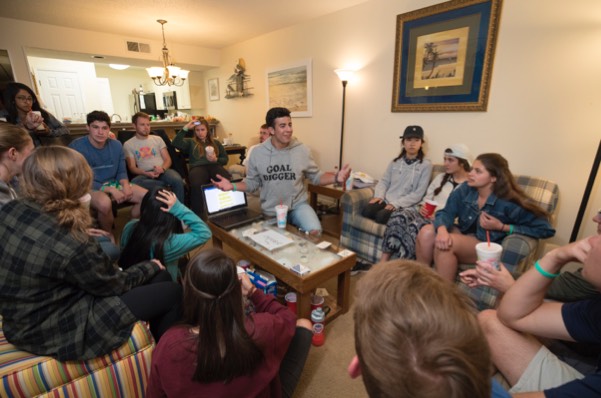 Students from LU and PVCC participate in a community game time. They barely knew one another before the trip. By the end, one student commented, “I can’t emphasize how connected we were.” 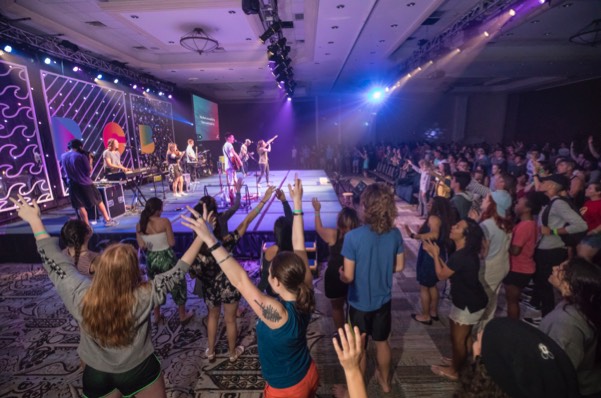 Students worship along with a band during a Big Break evening session. Conference sessions included biblical teaching and training in evangelism, as well as fun and games. 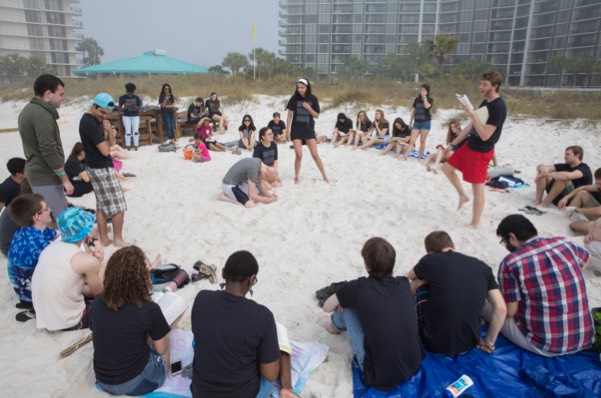 Cru® staff member Evan Chappell (right, standing) teaches from the Bible during an informal Sunday morning devotional. Each week, students arrived on a Saturday, spent Monday through Thursday in conference sessions and outreach activities, and closed the week with free time on Friday. 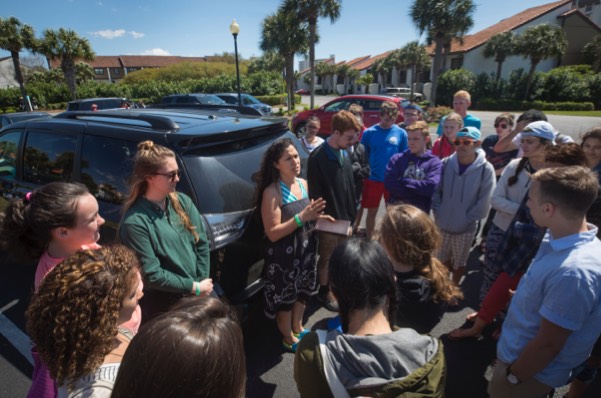 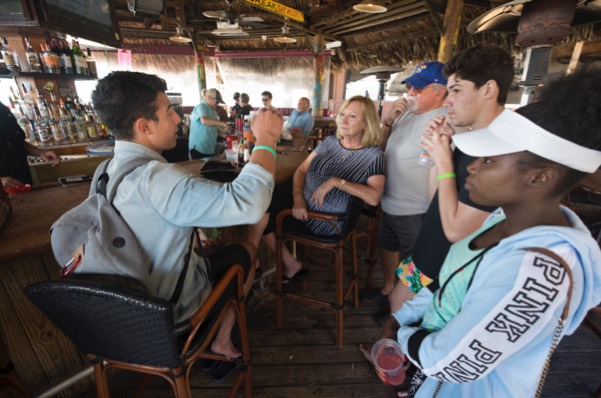 George Flores (left), Mona Lissa Constant and Blake Fraser discuss their faith in Christ with a couple at a beachside restaurant. High winds forced the group off the beach but didn’t deter them from introducing others to Christ. 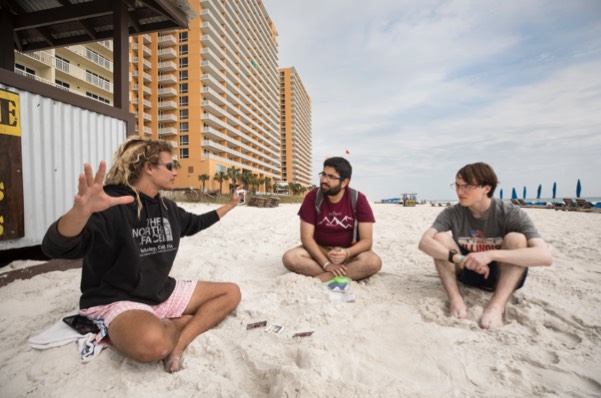 Nolvin Cruz-Arriaga (center) and Caleb Delaney (right), Piedmont students, talk with Spencer, who runs a rental stand on the beach. 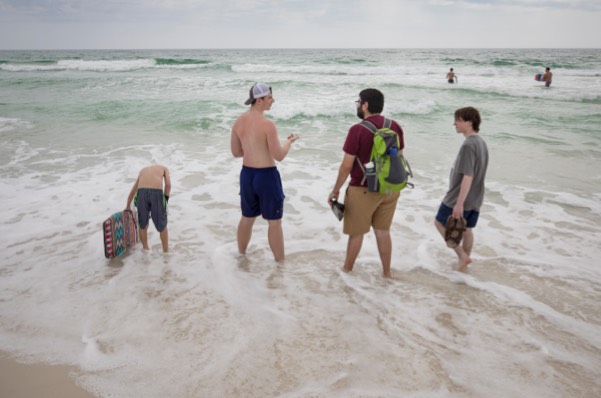 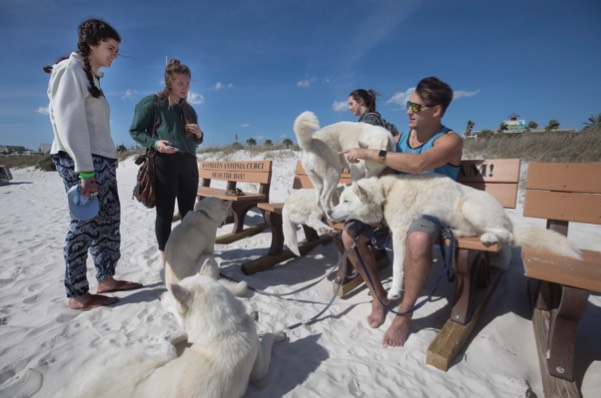 Bethany Alamilla (in white), a Piedmont student, and Abby Henry (in green), a Liberty student, chat with a man and his five huskies on Panama City Beach. 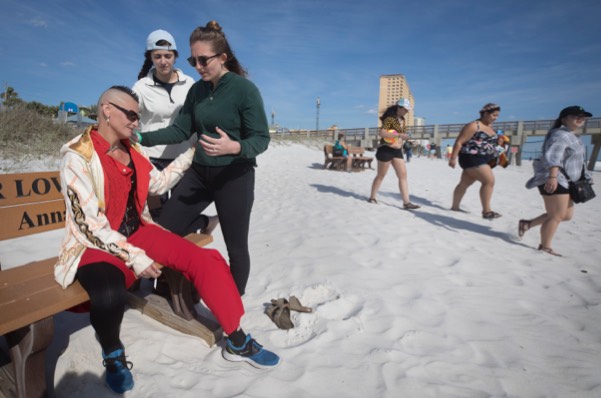 Bethany Alamilla (in white) and Abby Henry (in green) pray with Billy Kelley, who had just relocated to Panama City Beach in hopes of finding work. Even when people weren’t interested in discussing spiritual topics, students offered to pray for whatever requests they had. 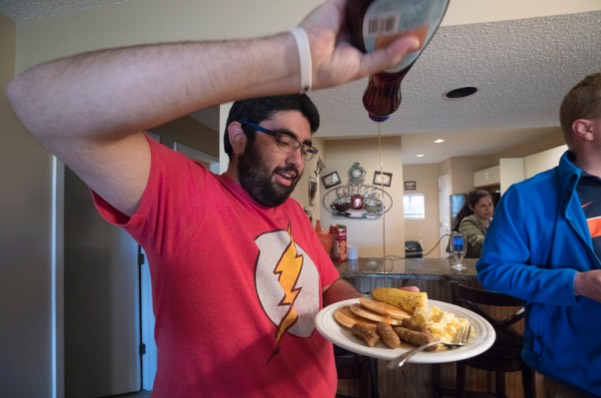 Nolvin Cruz-Arriaga prepares “breakfast for dinner.” The Liberty and Piedmont students separated into five groups for “family dinners,” a time to get to know one another and share what God was teaching them while at Big Break. 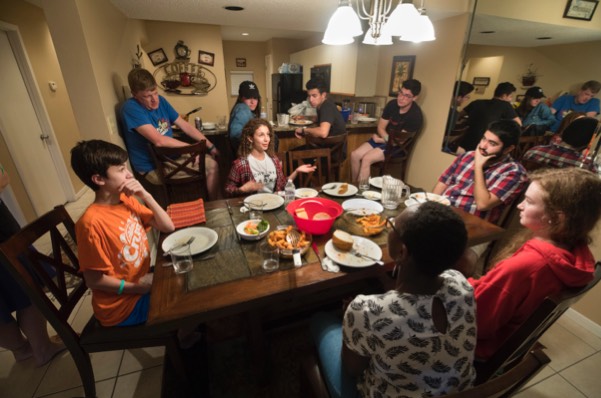 All eyes are on Victoria Suarez, from Liberty, during a family dinner conversation. 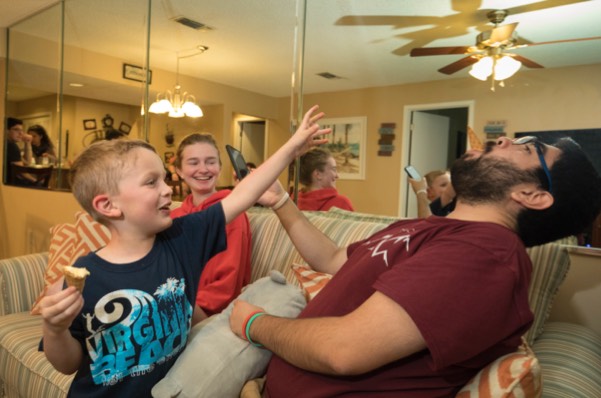 Nolvin Cruz-Arriaga enjoys a lighthearted moment with Samuel Brown, Andrew and Jena’s 5-year-old son. The Browns’ three kids brought an additional sense of family; Olivia, age 15, the Browns’ eldest, joined her dad to share her faith in Christ during one of the outreaches. 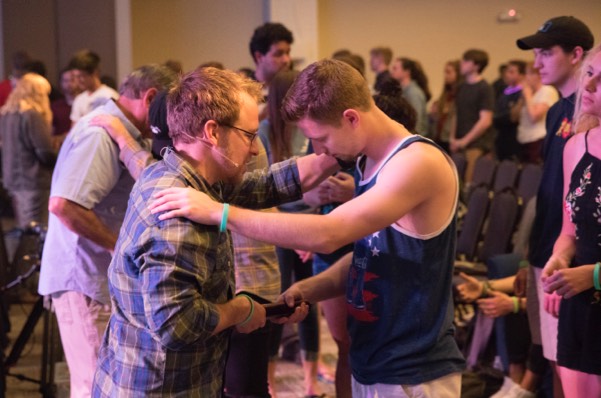 Lee Watkins, conference emcee (left), prays with a student after an evening talk. The baton they hold symbolizes this generation “taking the baton” of world evangelism and discipleship. For many returning to campus, the Big Break experience sparks a desire to talk about their faith with the students immediately around them. 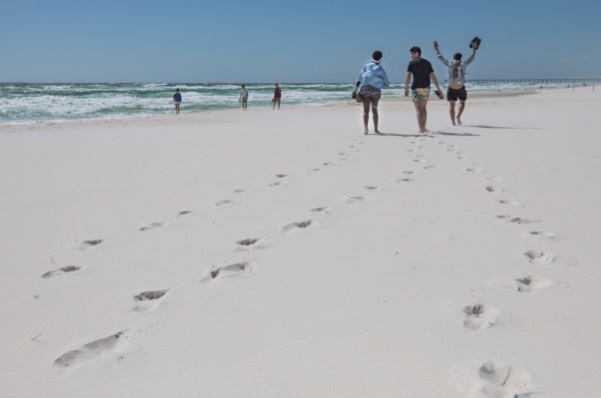 Mona Lissa Constant, Blake Fraser and George Flores (from left to right) walk along the beach to talk about Christ with others.

Have you taken a spring break trip to share the good news? 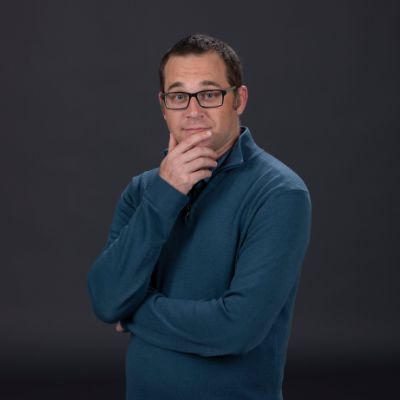 Jason writes for The Communications Group of Cru®. He served as a team leader for Cru’s campus ministry in Pittsburgh for seven years. He has one wife, three kids, and an embarrassing number of brain cells reserved for the Pittsburgh Pirates.

Read more from the July 2018 issue 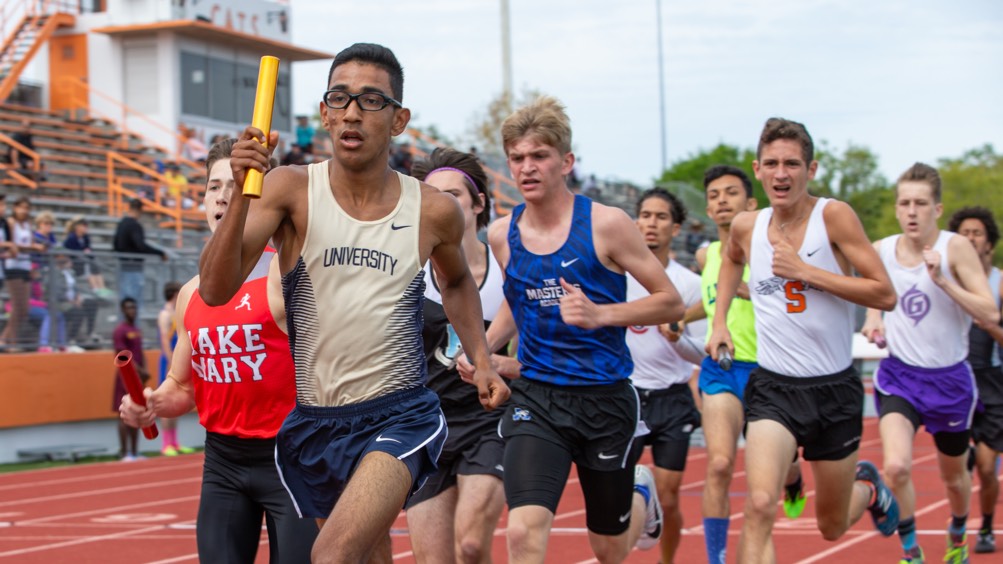 Pursuing Success on and off the Field