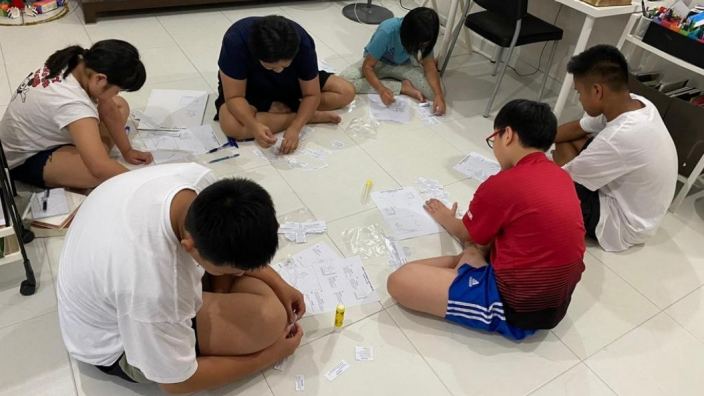 Reaching Every Child Around You

Who would have thought a children’s ministry would spark off from a casual conversation at an MRT station?!

A mom chatted with Maria at the MRT station as she recognized Maria had run the programme in their children’s school. (Maria has been actively involved in the parent support group). This mom also shared that her whole family recently became Christians. The pair said goodbye and were not in touch anymore. A few weeks later, this family of new believers moved to the same block as Maria. Maria immediately recognized that this was no coincidence. She told God, “You must have a plan. Let me be sensitive to Your leading.”

A few months later this new Christian mom brought her then 11 and 13 year old children to Maria’s home. This mom shared her frustration in not being able to answer her children’s questions about this newfound faith. Hence, she requested Maria to help answer her children’s questions. Maria was dumbfounded. She was not sure whether she could answer all their questions but was willing to meet the children regularly. She offered to tell Bible stories. The children readily agreed to it. So on the evening of 28 February, 2020, she had her first session of ‘Bishan Bible Study’ (BBS). Every Saturday these children would come to Maria’s home to study the Bible with her own children, until Circuit Breaker kicked in…

The group grew from 5 to 20 regulars during Circuit Breaker.

Maria thought this assignment from God would be stopped since they could not meet physically. The children wanted to meet, so the Bible study went online. Maria got creative in her teaching with colourful Powerpoint slides and Kahoot. She also invited Jovita (a fellow stay-at-home mom in church) and her children to join in though they do not stay at Bishan. God had a greater plan. Maria’s children were excitedly inviting their friends who stayed in the same block. Boom. The group grew from 5 to 20 regulars during Circuit Breaker. These children would rather attend the Bible study than do things with their own parents on Saturday nights. Maria was concerned about how the parents would feel about it, since not all children involved were Christians. There was no parent consent sought as it was purely the children who invited other children. So Maria decided to organize a Christmas’ Celebration and invited the parents to join their children. Maria apologized for not being able to inform the parents ahead of time. Thank God that the parents were okay with it. In fact, they were more than happy that their children did not come to bother them for 1 hour every Saturday.

One of the girls who attended BBS has accepted Christ. This girl’s brother was blacklisted in school for his mischief. But after attending BBS, his school observed that his behaviour had improved significantly, and hence he was removed from the school’s blacklist. Such transformation led the family of this boy to attend church with Maria.

Since Circuit Breaker, Jovita’s children have joined this Bible Study. They have been a great help to Maria in class. Jovita chipped in as and when she could. As she saw how these children were transformed by studying God’s Word, she got excited to reach out to others in her own neighbourhood as well.

Last year in February Jovita met a mom at the playground. Surprisingly this mom was open towards Jovita. She invited this mom to send her children to BBS online. The mom was keen, but each time she could not, as something always came up at 7pm (Bible Study time). Jovita recognised this was spiritual warfare. She persevered in prayer and kept inviting. Month after month the children could not turn up. Jovita wanted to give up, but God’s Spirit kept encouraging her to press on. Finally, the children join in September!! Jovita was overjoyed to see God had answered her prayers. Now Jovita wants to invite more children to join BBS as she sees these families need Christ - the hope for this generation.

Last May, Maria needed to attend to her elderly mom and she asked Jovita to teach 6 sessions in her absence. Thank God Jovita was ready to take on this challenge. Now BBS has grown beyond Bishan. Now they have children from 2 other areas of Singapore and 2 children from Indonesia!


LEARN HOW TO REACH EVERYONE AROUND YOU