What is a Calling? 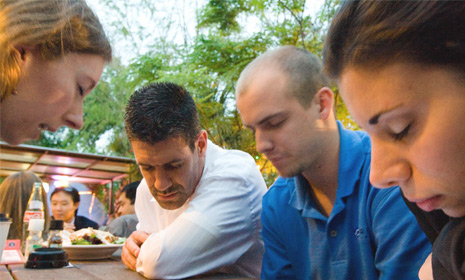 Earlier I mentioned the notion of calling this was: Calling is the truth that God calls us to himself so decisively that everything we are, everything we do, and everything we have is invested with a special devotion, dynamism, and direction lived out as a response to his summons and service.

Now it is time to unpack that truth further, beginning with four essential strands in the biblical notion of calling that we must always hold.

First, calling has a simple and straightforward meaning. In the Old Testament the Hebrew word that has been translated as “call” usually has the same everyday meaning as our English word. Human beings call to each other, to God, and to animals. Animals too can call.)

The psalmist, for example, wrote that God “provides food for the cattle and for the young ravens when they call.”) Under the pressure of theology and history, the term call has traveled a long way from this simple beginning, but this straightforward sense and its obvious relational setting should never be lost. When you “call” on the phone, for example, you catch someone’s ear for a season.

Second, calling has another important meaning in the Old Testament. To call means to name, and to name means to call into being or to make. Thus the first chapter of Genesis, “God called the light ‘day’ and the darkness he called ‘night.’” This type of calling is far more than labeling, hanging a nametag on something to identify it. Such decisive, creative naming is a form of making.

Third, calling gains further characteristic meaning in the New Testament. It is almost synonymous for salvation. In this context, calling is overwhelmingly God’s calling people to himself as followers of Christ. Just as God called Israel to him as his people, so Jesus called his disciples.

The body of Jesus’ followers as a whole is the community of the “called-out ones” (the origin of ecclesia, the Greek word for church). This decisive calling by God is salvation. Those who are called by God are first chosen and later justified and glorified. But calling is the most prominent and accessible of these four initiatives of God. Not surprisingly it often stands for salvation itself, and the common description of disciples of Jesus is not “Christian” but “followers of the Way.”

Fourth, calling has a vital, extended meaning in the New Testament that flowers more fully in the later history of the church. God calls people to himself, but this call is no casual suggestion. He is so awe inspiring and his summons is so commanding that only one response is appropriate—a response as total and universal as the authority of the Caller.

Thus in the New Testament, as Jesus calls his followers to himself, he also calls them to other things and tasks: to peace, to fellowship, to eternal life, to suffering, and to service. But deeper even than these particulars things, discipleship, which implies “everyone, everywhere, and in everything,” is the natural and rightful response to the lordship of Christ. As Paul wrote the followers of Christ in the little town of Colosse, “Whatever you do, work at it with all your heart, as working for the Lord, not for men.”

In short, calling in the Bible is a central and dynamic theme that becomes a metaphor for the life of faith itself. To limit the word, as some insist, to a few texts and to a particular stage in salvation is to miss the forest for the trees. To be a disciple of Jesus is to be a “called one” and so to become “a follower of the Way.”

The third and fourth strands of the meaning of calling are the basis for the vital distinction elaborated later in history —between primary and secondary calling. Our primary calling as followers of Christ is by him, to him, and for him. First and foremost we are called to Someone (God), not to something (such as motherhood, politics, or teaching) or to somewhere (such as the inner city or Outer Mongolia).

Our secondary calling, considering who God is as sovereign, is that everyone, everywhere, and in everything should think, speak, live, and act entirely for him. We can therefore properly say as a matter of secondary calling that we are called to homemaking or to law or to the practice of art history.

This vital distinction between primary and secondary calling carries with it two challenges — first, to hold the two together and, second, to ensure that they are kept in the right order.

Excerpt from “The Call” by Os Guinness. Used by permission from Word Publishing. To order, go to www.christianbook. com

"In the days when television was a luxury we could not afford, we would sit on the linoleum floor around my great-grandmother’s rocking chair and listen to her tell stories..."