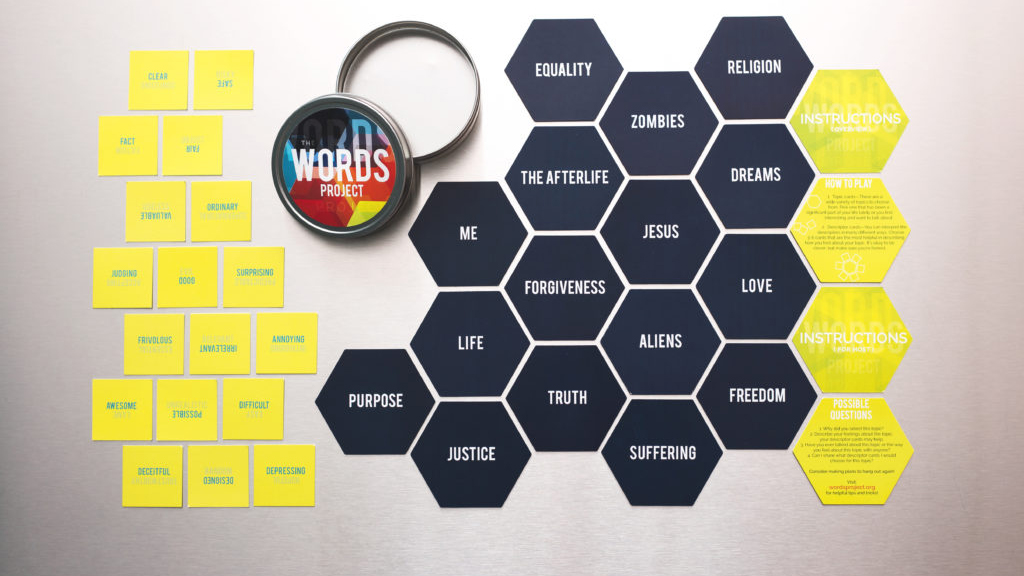 One word started their conversation: Freedom.

Josh Dickens and Delaney Cornish, students serving in the Cru movement at the University of Central Florida, had some time between classes and a new evangelism tool they were eager to try out.

Walking from the student union to the campus’ reflection pond, they spotted Matt casually eating a granola bar and sitting on a limestone bench. They introduced themselves and explained they were trying out a new game called “The Words Project” and wanted to see if he’d play it with them. They learned Matt is a sophomore and a physics major who loves empirical knowledge. He’s also an atheist.

Josh pulled out a small deck of dark blue cards with one word printed on each of them. He encouraged Matt to pick a card that resonates with his life at the moment. Matt picked “freedom.”

Josh asked smiling, “So, why did you pick that card?”

“Living in the country we do, it’s awesome,” Matt said.

There were smaller cards with words printed on them that Matt used to explain more of what freedom means to him. He chose “awesome” and “good.” Delaney listened intently while Josh picked up the deck of cards and asked Matt if he could share a word that’s significant to him. Matt agreed, and Josh selected “forgiveness” and the smaller cards “essential” and “valuable.” He described his experience with forgiveness through his personal relationship with God. This opened a door to a spiritual conversation.

“What about truth?” Matt responded with a bit more seriousness in his tone.

“What do you think that could be?” Josh countered. 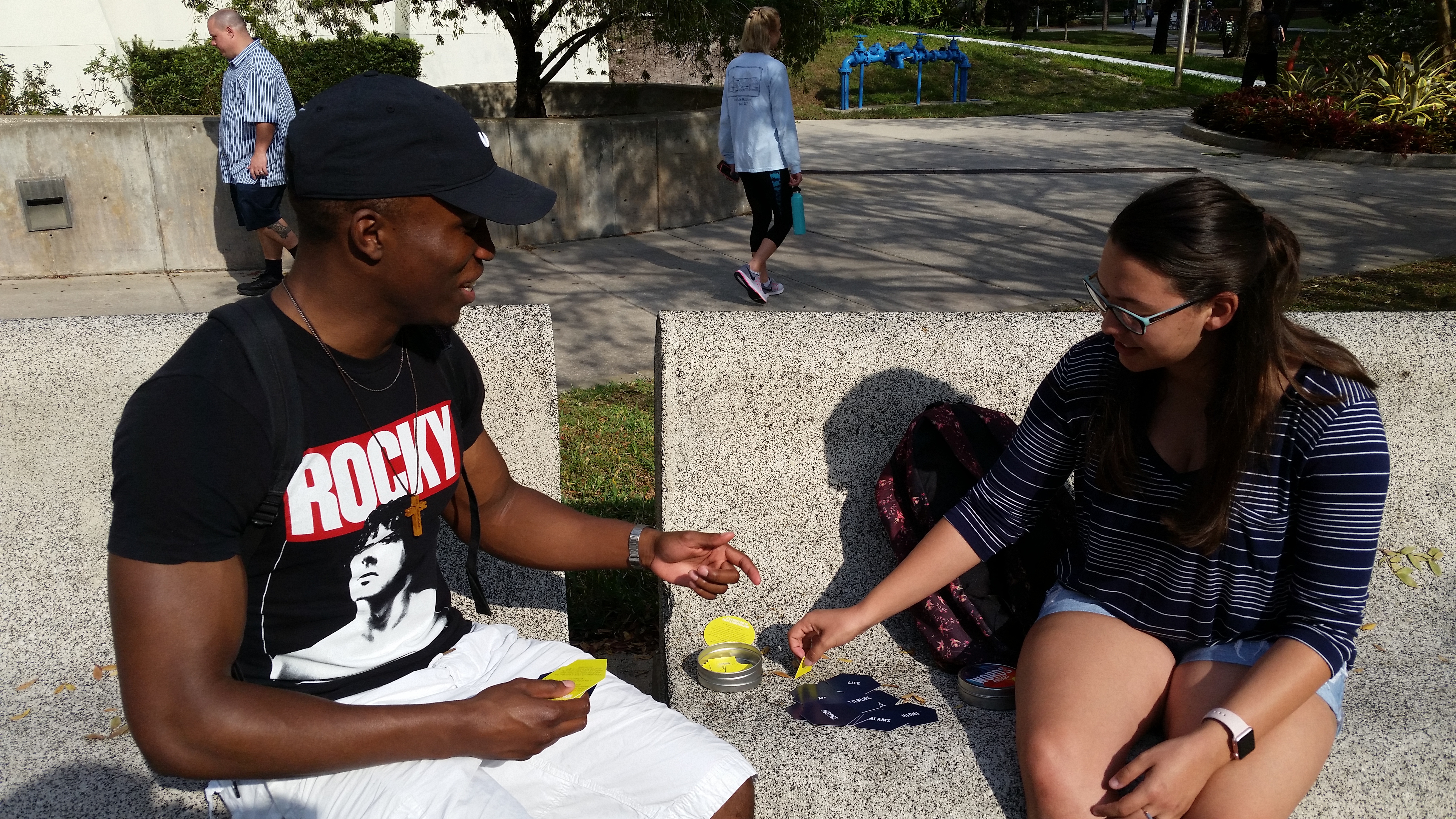 “Your truth is different than mine – yours is the Bible, mine is empirical knowledge.”

“There’s a lot of unknowns in the faith world and the actual. The thing is, what do you put your trust in?”

Josh’s question to Matt is at the heart of what these cards aim to surface: What do people believe and how can believers listen more effectively with understanding and intent?

“The Words Project” is a new evangelism tool developed by Cru, designed to help anyone start a spiritual conversation using one word. Evangelism isn’t easy, but it can be fun and surprising as we connect with people’s stories and share the love of Jesus.

Teresa Touma, a Cru staff member who helped develop the conversation starter, explains that the heart behind “The Words Project” is to ask people what they think.

“One of the things we’ve discovered is that people want to be heard,” Teresa said. “A lot of times, as Christians, when we go into a conversation with someone, we do a lot of telling and not a lot of listening.”

Conversations help us build bridges of connection to the lives of others. Jesus modeled this in the gospels when He shared parables and spent time with people. He used His own conversation starters – whether writing in the sand, asking for water at a well or stretching a meal of five loaves and two fish in supernatural ways – to connect to people’s stories. And because He connected, their hearts were open to God’s truth.

After Matt left, Josh and Delaney chatted with a girl named Sam.

When Delaney handed her the cards, the art history major picked “freedom” and the smaller cards “random” and “designed.”

“This is my first semester at UCF,” Sam said. “2017 is gonna be a big year for me. Being away from my parents, I have the freedom to do whatever I want.”

As their conversation moved toward faith and their religious beliefs, Sam said she grew up going to church, but didn’t have a specific faith she believed in now.

“If there’s a higher being, good for him or her,” she said. “But I’m gonna be here, doing my own thing.”

Delaney listened and then asked if she could share her card. Sam welcomed it and Delaney picked “truth” and how she experienced it through her relationship with God. The two continued to talk and Delaney saw the next open door the cards could provide her with Sam.

“I’d love to get together with you and talk about life,” Delaney said. “Could I get your phone number, Facebook?”

They “friended” each other online a few moments later and discussed connecting again.

“The Words Project” helped Josh and Delaney start dialogues about faith with people they didn’t know. The resource can help you do the same thing.

Consider connecting with different groups on campus and ask them to play “The Words Project,” (like gaming communities, alliance groups and societies.) Approach with the desire to hear people’s stories and as you do, share yours and how God meets you there.

My Old School Way of Sharing the Gospel