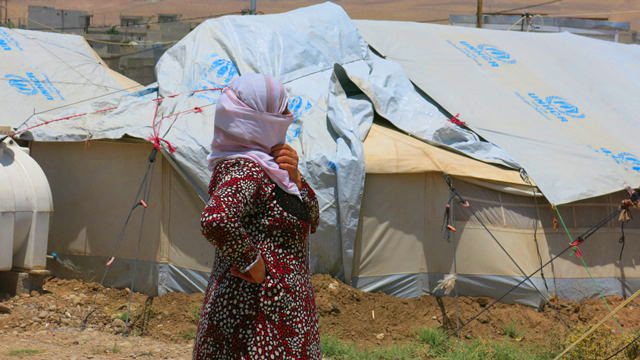 Kareem Mufleh freely admitted he fought for ISIS. At just 15, he was put into battle with the knowledge that if he didn’t fight he wouldn’t make it through the day.

“They captured my village and gave me a choice,” Kareem said in a CBS news article. “Either join ISIS, or be beheaded.”

The name ISIS, or the Islamic State in Iraq and Syria, almost plagues our televisions, radios and newspapers as the group continues to try and create an Islamic state across Sunni areas of Iraq and Syria.

The group known for killing dozens of people at a time, as well as carrying out public executions and crucifixions now has taken over large swaths of northern and western Iraq. Now, I find myself asking what can we do here in America? How should we react?

I live in a peaceful society and news like what is going on with ISIS is like something out of a horror film.

I know the ingredients of the horror – the curse of broken humanity – are buried deep in me too.

At the time, I was sitting in a plush, leather chair in a mahogany-lined boardroom with the CEO of a large company looking at me. I swallowed, my stomach feeling like it was tied in a Chinese butterfly knot.

I was a campus minister raising support and had connected with the CEO through my school. He had been crunching the numbers of my ministry and saying he had heard from the Holy Spirit. Now, as we sat in the boardroom, he told me I was on the wrong track.

The CEO picked up his phone to call some business friends. They were going to give me some direction.  I cringed – I was already feeling 7 mm tall.

They grilled me for about an hour, “Amening” everything the CEO was saying.

Then they prayed for me.

While this was going on, my face grew red and my hands shook. I was seething. I hated these guys and given the right conditions – swap the boardroom for a forest, my pencil for a knife and inject me with some courage – who knows what I would have done?

The apostle John says in 1 John 3:16, “Everyone who hates his brother is a murderer.”

I murdered in a boardroom.

“You have heard that it was said, ‘Love your neighbor and hate your enemy.’ But I tell you: Love your enemies and pray for those who persecute you, that you may be sons of your Father in heaven.”

While the boardroom represents my tiny taste of enemies, it pales in light of the incredible suffering Christians are facing in the Middle East. How are they coping?

“Do you know what the number one request is from Christians being persecuted by ISIS?” asked Al Goff who works with the Global Aid Network (GAiN), the humanitarian arm of Cru. “It’s that we as a church would all heed Christ’s call to pray for our enemies and pray for ISIS.”

Does Al mean the ISIS militia who has been beheading people? The group so bent on evil that when I hear what they are doing I feel sick?

And the Christians who are experiencing these horrific acts want us to pray for ISIS? I want members of ISIS dead – yesterday.

In his travels to the Middle East, Al has seen the suffering first hand. He has wept for days and chokes up as he talks about it. Yet, those he has met are calling us to pray for their enemies.

Consider these Christians facing ISIS, these are real people, really suffering. In light of this, my boardroom experience was nothing. They are asking for a real world call to a radical sort of prayer, and it's convicting.

Learn more on how to pray for your enemy.

Take a moment, right now, to get on your knees and lift up members of ISIS that God would break their hearts and create a radical change in their lives.

Ebola – Hope in the midst of horror