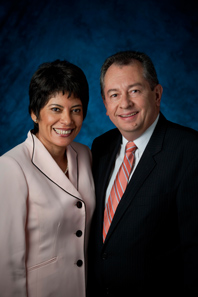 Ladislao, also known as “Layo” became a Campus Crusade staff member in 1978. For 10 years, he and his wife served as director of operations for Campus Crusade Latin America (1993-2003)

In 2003, he became the national director for his home country of El Salvador. Layo's parents, Ladislao and Lolita Leiva, started Campus Crusade's ministry in El Salvador 37 years earlier in 1966. “I'm very proud of continuing to build the legacy that my parents started,” says Layo.

In 2004, he was appointed director of affairs for Mexico, Central America and Caribbean.

In February 2010, Layo was designated Area Team Leader for the combined areas that now form Latin America, providing leadership to over 550 full-time staff in 24 countries. A highly capable Leadership Team made up of leaders from Trinidad & Tobago, Argentina, Bolivia, and the U.S. co-lead with the Leivas this key region of the world.

Layo and Luchy love to work together to reach leaders and influencers. In the last 15 years, they have helped over 3,000 business professionals receive training in reaching their peers for Christ. They are passionate about building movements that encourage people to be leaders in spreading the gospel and promoting spiritual and societal transformation in their spheres of influence.

“We are not asking them to help us come change the world but we are servants to help them change their world,” Layo said.

Layo and Luchy live in San Salvador and have 3 sons: Hector, Danny and Andres.