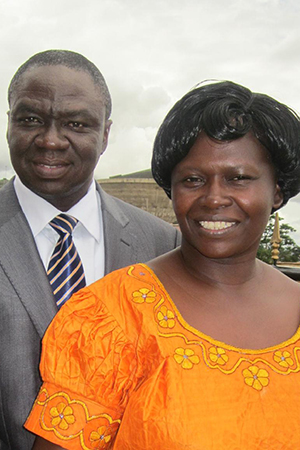 Djasrabe Siangar, whose name means “we are able to build a village,” was born into a Christian family, the son of a pastor. He received Christ at a youth camp in April, 1983 when the messenger addressed the young people who were not sure of seeing God in heaven. The messenger asked them to come to Jesus and Djasrabe gave his life to Christ.

While working in the recruitment department of the Ministry of Public Service in Chad, the churches in his denomination asked him to go to Bangui, Central African Republic, and attend the New Life Training Center (NLTC). The denomination hoped he would help their youth return to evangelism. God used the training and the Campus Crusade National Director to convince him to join staff. He returned to Chad, resigned his position in Public Service and attended new staff training in Bamako, Mali, completing his training in July, 1996.

“The NLTC training first of all allowed me to understand that the religious life I led before and which I was so proud of, was in fact a life centered on the earthly ambitions of the flesh,” Djasrabe says. “I became aware of my own need of a God-centered life and the need of the Chadian people who were lost without Christ. Chad needed help in knowing the truth in Christ. The teachings of Campus Crusade were powerful and appropriate to accomplish this goal. This is what motivated my commitment to join Campus Crusade.”

As the first Campus Crusade staff member for Chad, Djasrabe has served in a number of positions including Director of the University Ministry, Director of LeaderImpact, and National Director for Chad. He was appointed the Area Team Leader for Francophone Africa in July, 2014.